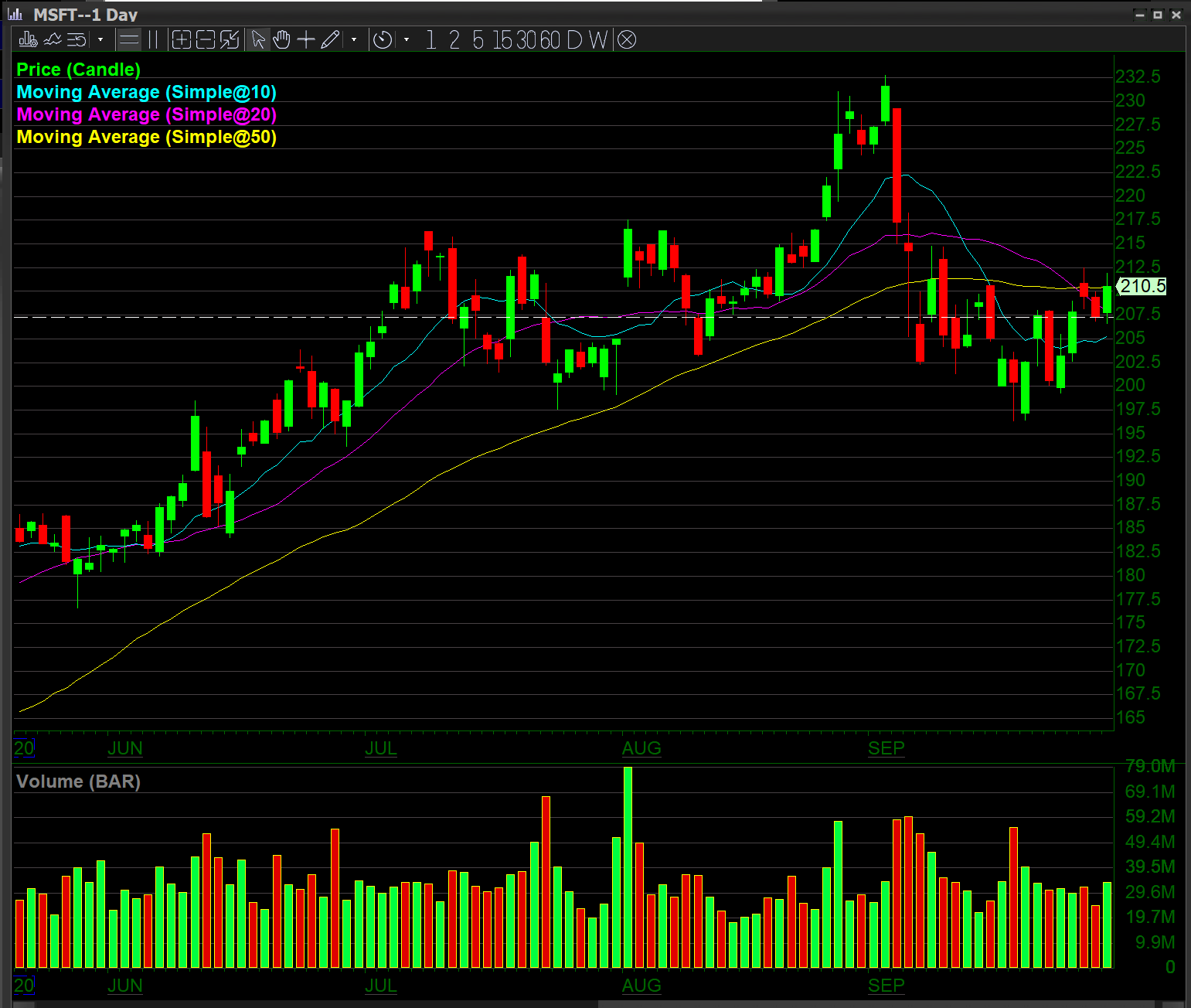 As we look forward to September, not much has changed since August. The markets have gone a bit higher; in fact, they have made new highs for the year. See the charts of the $QQQ, $SPY, and $DIA below. One question remains: Will this massive market move hold or not? There are so many negative indications on the horizon.

$QQQ:Still blasting off like a SpaceX rocket regardless of the worldwide pandemic: 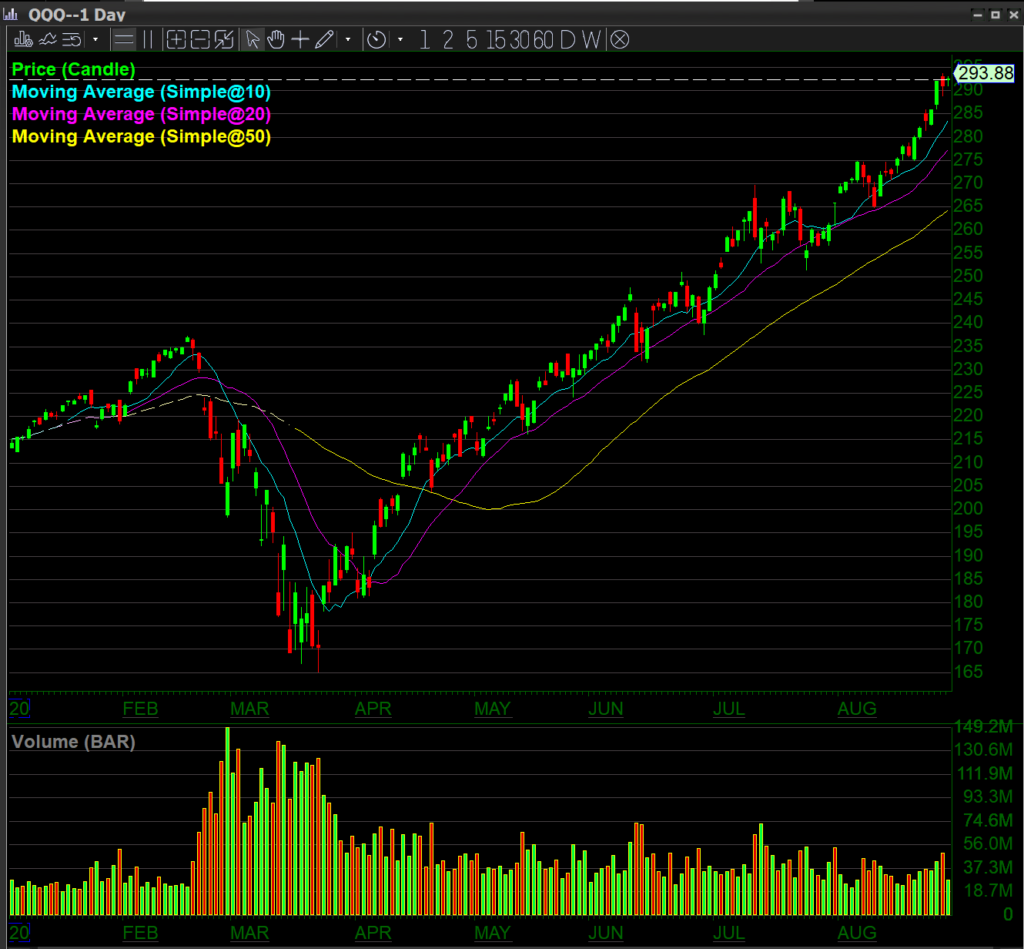 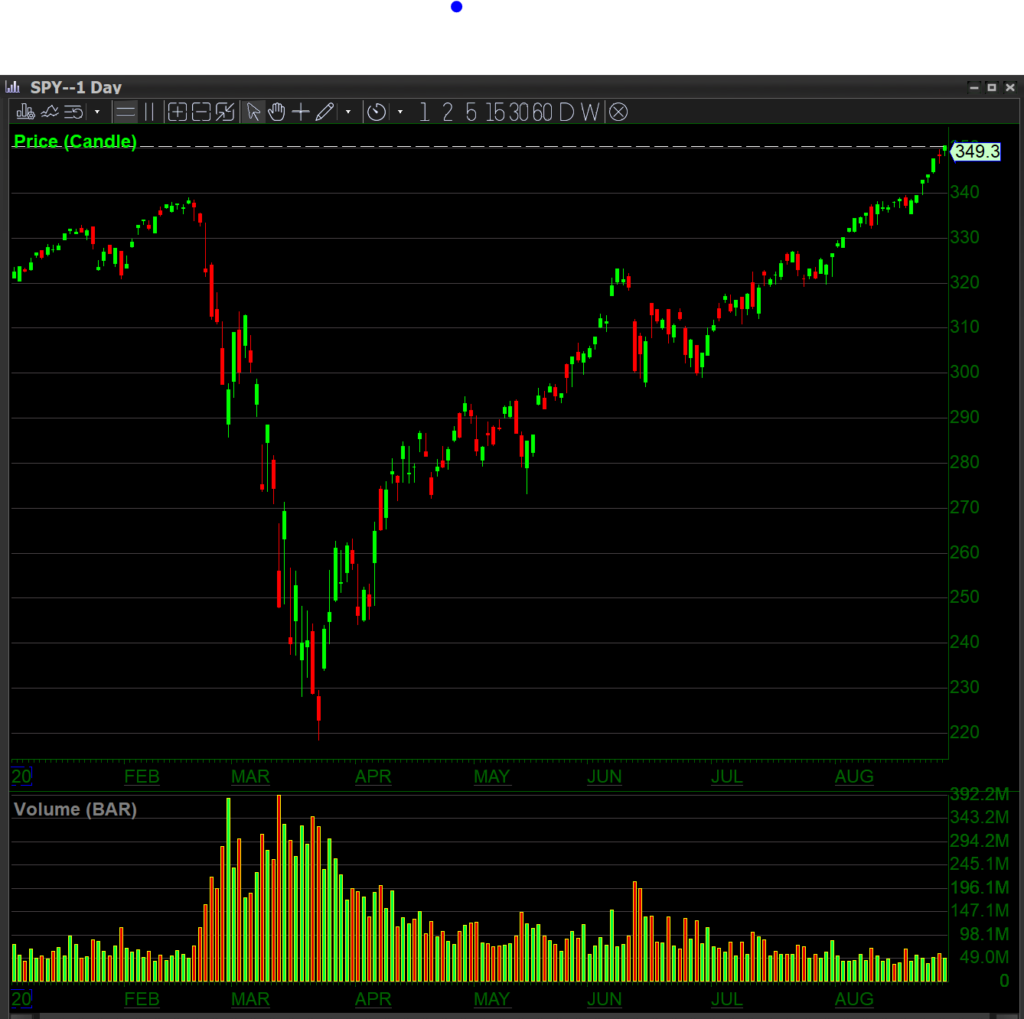 Only the old economy, $DIA is still struggling to make a record breaking new high. Regardless, the overall performance is still very good. 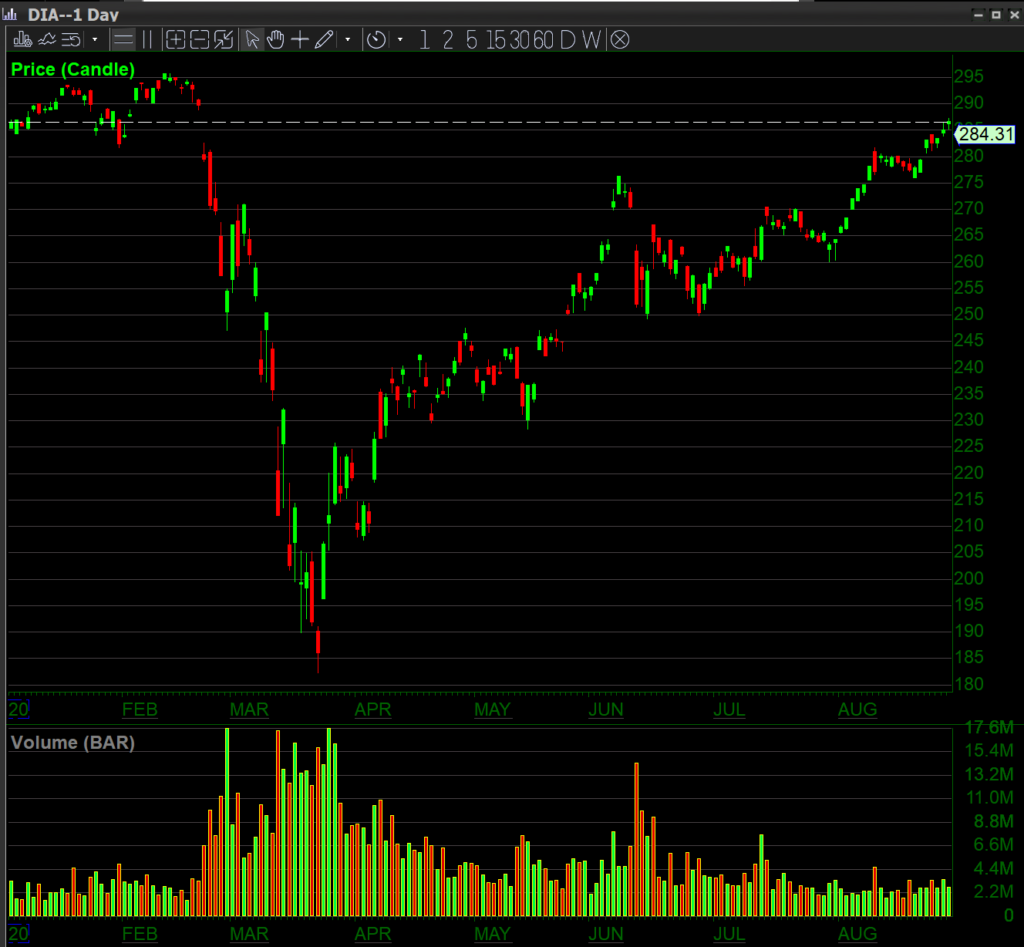 There is a looming presidential election in the United States, businesses that are never to reopen, and uncertainty of a second COVID-19 wave coming in the fall. Spending habits have changed and the supply chain has been interrupted. Most of the market move in the indices can be accounted for by the strength in the large digital tech companies. 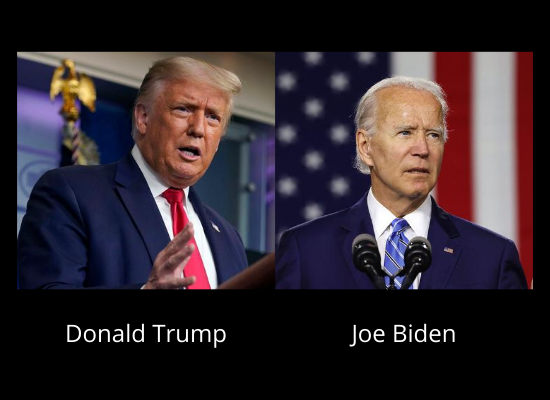 Trump currently lags in most polls as he did in the last presidential election in 2016. Although, we can’t completely count him out as he has been proven to be a Political Houdini.

Most of the large move up in financial markets has been caused as people had no other logical alternative as to places to put their money. With near 0% interest rates being paid in the banks and national governments adding debt to their currencies at an alarming rate, people were forced to invest in the stock market and/or other digital assets. Even gold and silver have been running to preserve their capital and potentially grow and beat the rate of inflation.

The move up in gold ($GLD is the Gold ETF, Exchange Traded Fund) and Bitcoin seems to have stopped as the U.S. dollar has started to hold its ground once again. Will the dollar make another move to the downside in and around the presidential election? We believe a lot has to do with what the outcome of the election will be or if the election results are even agreed upon.

$GLDis forming a bull pennant and might be getting ready for another move up. 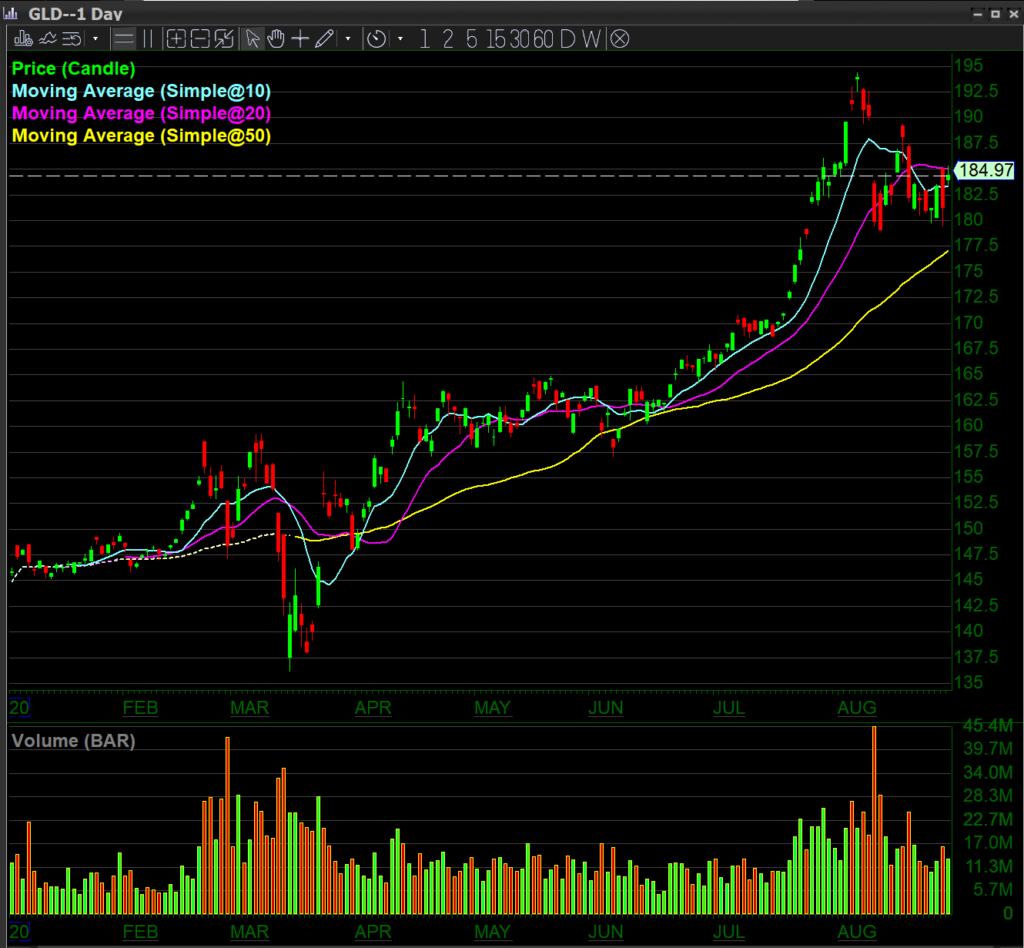 $GBTC is the Bitcoin Tracking Stock; it is also near the highs of the year and might be getting ready for a further break out. 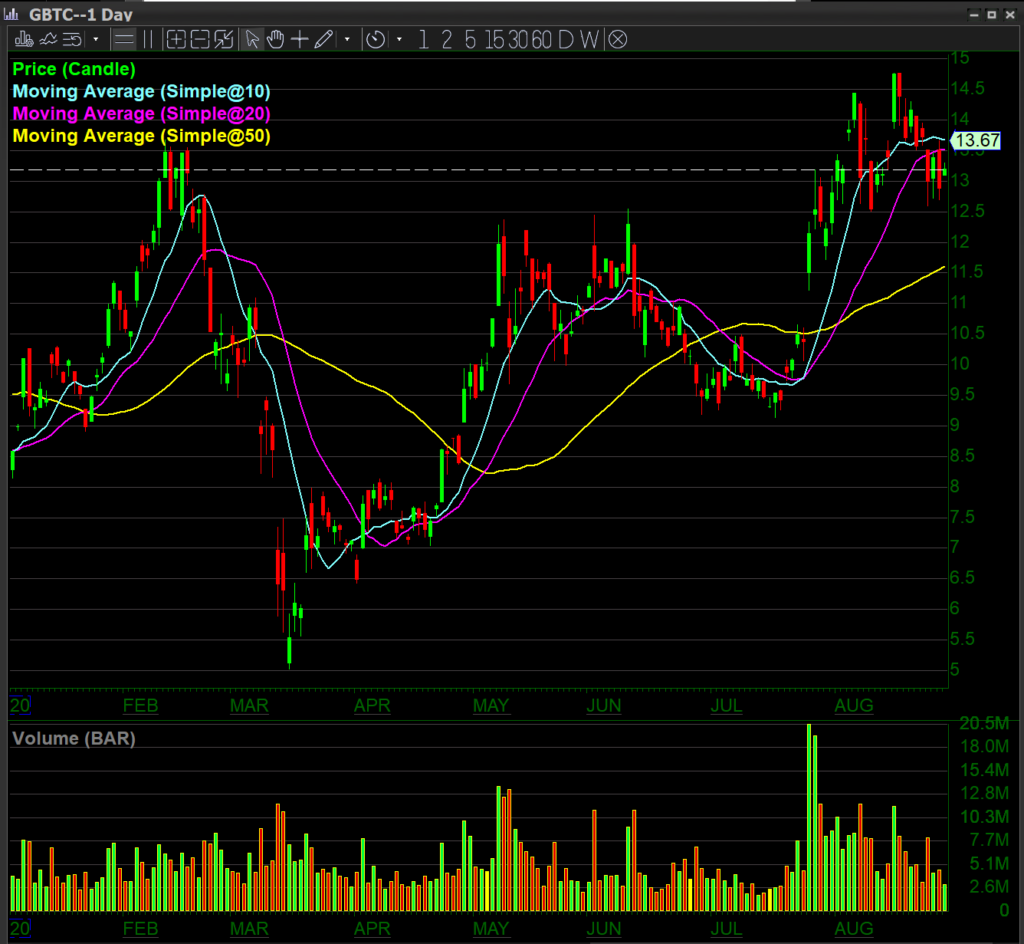 Important Reminder (from the last few months): Fundamental analysis often takes a long time to catch up with the technicals and the news, but the hard reality of the fundamentals usually catches up to the markets, bringing it back to its senses.

We have never seen this degree of polarization that has occurred in the U.S. around an upcoming presidential election. We have also never seen such a bifurcation in the U.S. markets. The majority of the stocks that make up the indices are actually down, or doing poorly, yet the tech giants have literally carried up the indices to new highs on incredible performance.

We hold firm that “Investing long term in the stock market at these high levels after a global pandemic does not seem like a rational thing to do. Sitting and waiting for things to become more clear seems like the most prudent plan”. This means this is a stock picker’s market.

If you remove the FANGAM stocks ($FB, $AMZN, $NFLX, $GOOG, $AAPL and $MSFT) from the major indexes, you would see financial markets have already started to level off. Any kind of pause at this point would be healthy as the markets need a break.

$GOOG has moved up again and is making new highs and rejecting the sell off which seems imminent after its less than stellar earnings report. 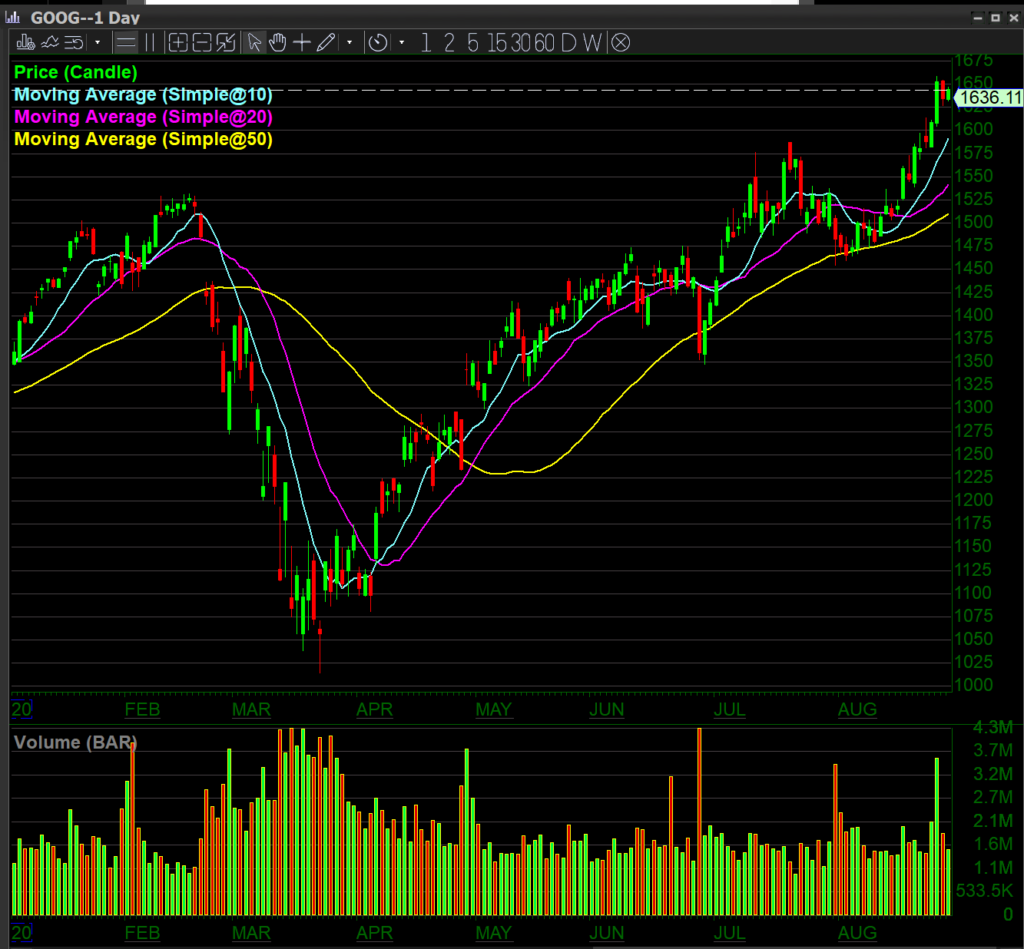 $NFLX has started to move higher once again. 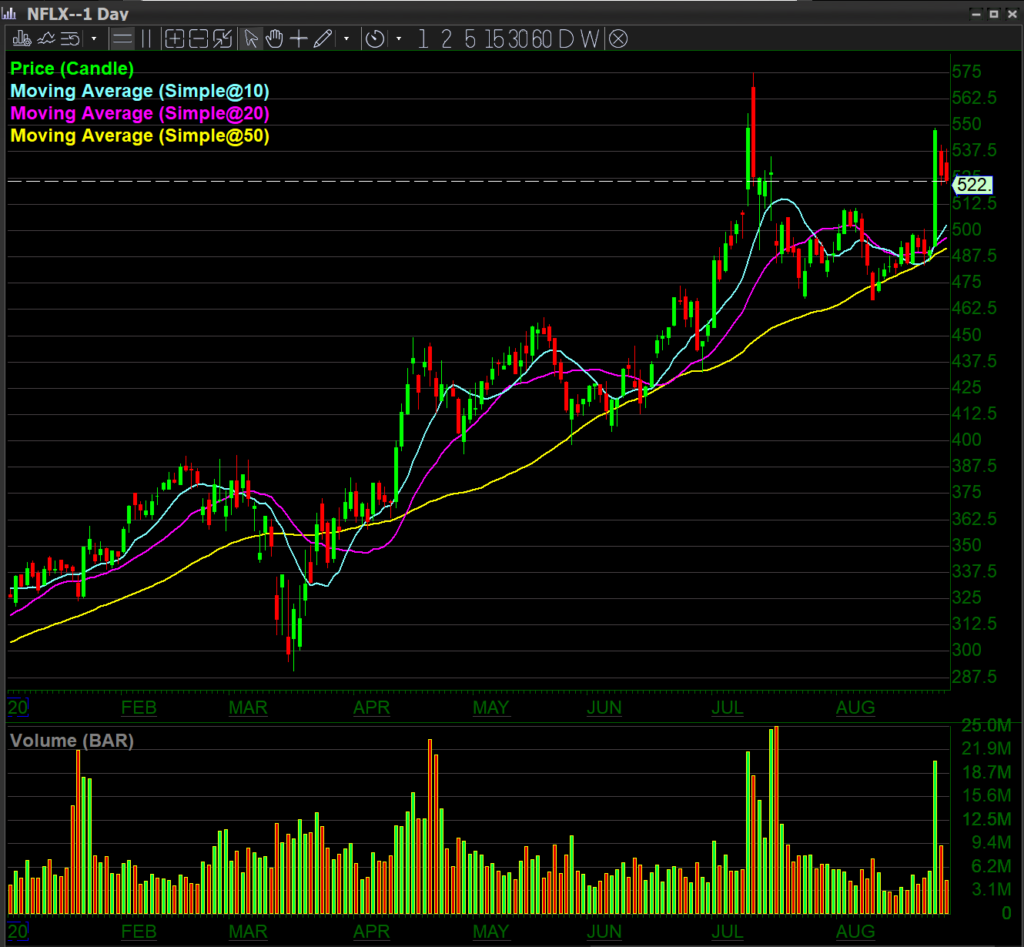 We are continuing to stay neutral, only because the market has rallied so much and so fast that it might now be overvalued. Markets will become uncommonly volatile as we get closer to the U.S. Presidential election as well. In times of transition, it is much better to have a trading mindset than that of a long-term investor. 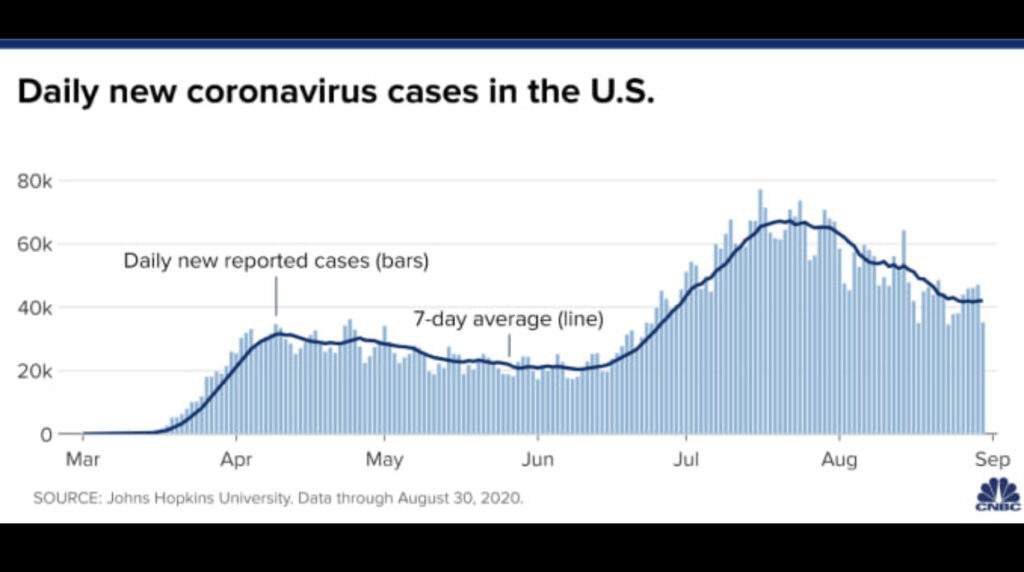 The U.S. seems to have already had two waves with the potential of a third wave as the colder weather settles in the northern part of the country. These previous waves are largely because the U.S. is large and the virus spread from the northeast to the south and west.

Europe has largely reopened, but is beginning to show signs of an impending second wave. Numbers of new cases have increased in Spain, France and the U.K. and it seems this will be the case everywhere as measures relax.

The chart provided below is showing cases increasing in France; even though the climate is still warm. What happens when outdoor dining and other warm weather solutions are no longer an option? How will the northern hemisphere deal with COVID-19 as the colder weather settles in? 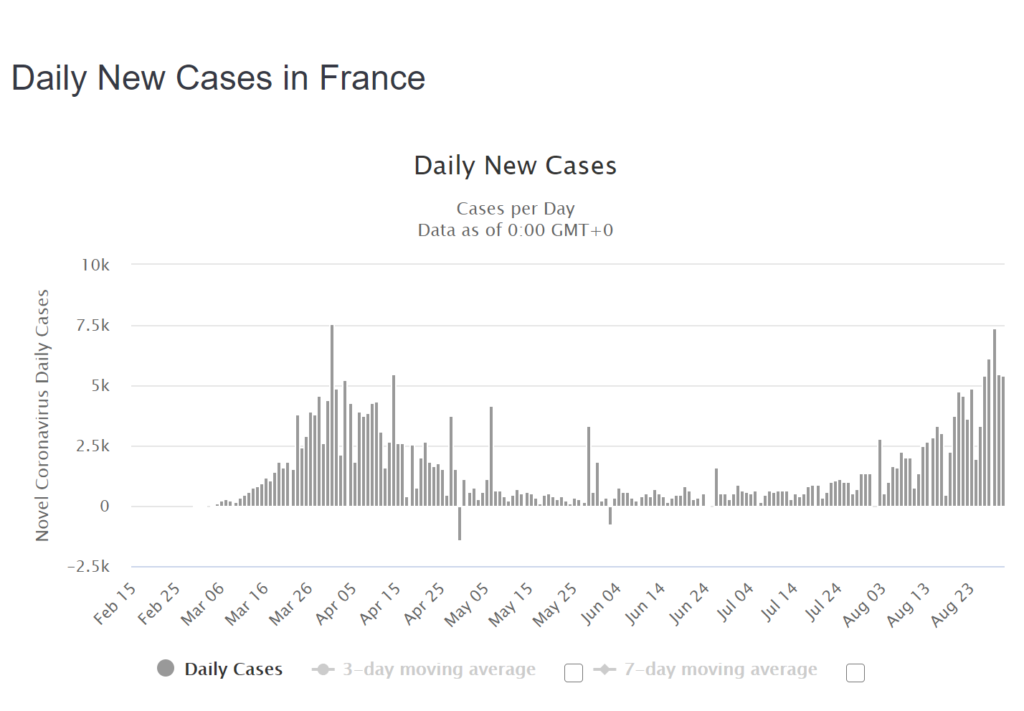 Caution is the order of the day, as this is a market for trading and not for investing at these levels. Some kind of pause or sell off can happen at any time. Choosing your entry is the most important price for taking a trade. If you are a trader then this would be an extended level to take an entry. Even as a long term investor, entering this market is a bit risky at this very extended level. In our opinion, this is not a good place to get in with impending political risk and geopolitical risk. If you do choose to enter the markets at these levels, we believe it is best to invest small amounts of capital spread out over time.There is more risk to the down side than potential profits to the upside. Markets like these remind us why we need powerful, fast and reliable trading tools like DAS Trader Pro.

Best of luck to you all. This is not investment advice by any means, but an outlook of things that might be to come. Trade Well, Stay Safe.