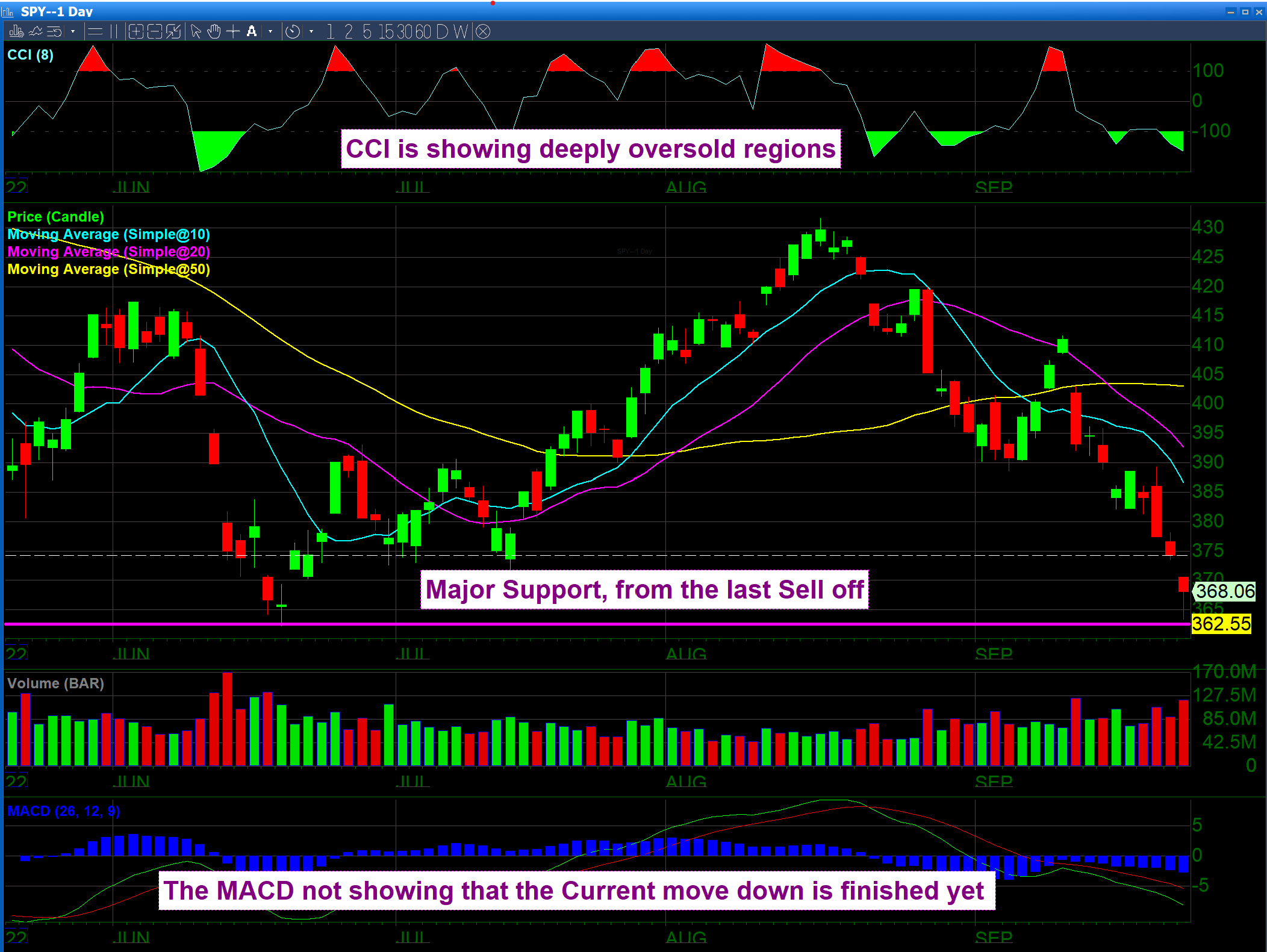 This past Wednesday (9/21), the Federal Reserve Bank increased interest rates by 75 basis points up to a point range of 3.00 to 3.25. Since that announcement, the markets have sold off precipitously (as you can see in the chart of the $SPY above).

As a result of this latest announcement to raise interest rates, we wanted to do an in-depth explanation as to how this affects the stock market, and how it affects the broader economy.

The Federal Reserve and its Prime Directive

The Federal Reserve Bank is an independent, privately owned arm of the U.S. government. It is independent and non-political; meaning it is meant to be charged with governing the economy while not being affected by the political swings in power that occur. For this reason, the U.S. President chooses the appointment of the Fed Chairman and Congress must approve that selection. 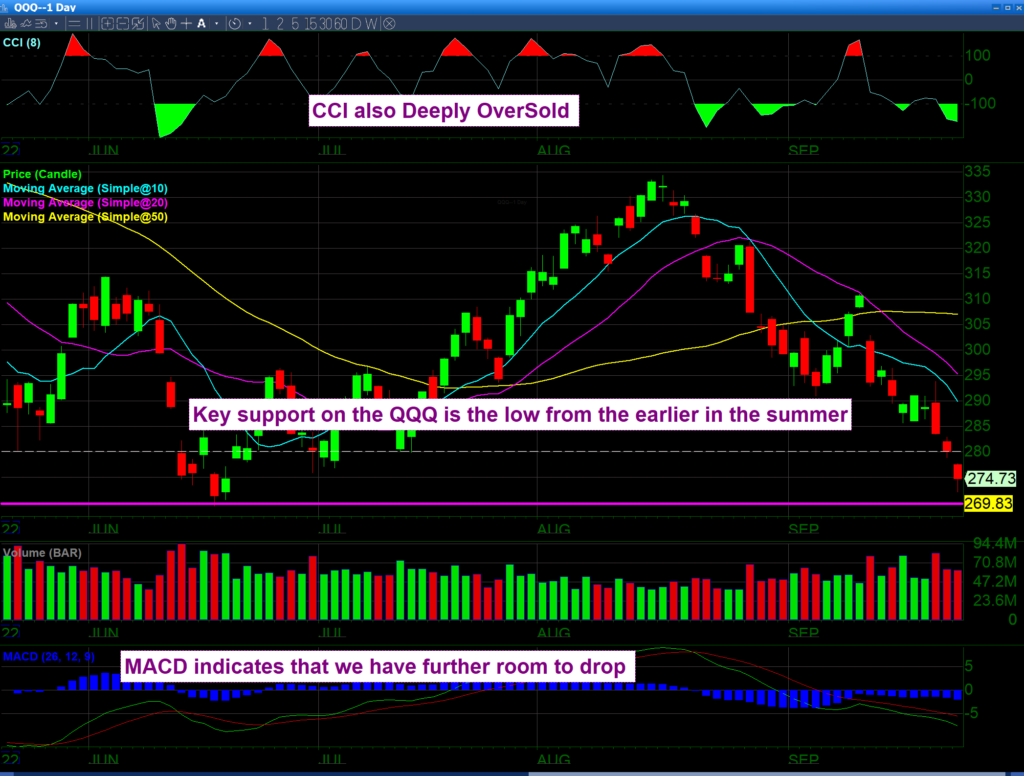 How did things get so far out of line?

There was a period of almost 18 months, after the emergency dropping of interest rates due to the pandemic, that the Federal Reserve and various government officials insisted inflation was “transitory”. Due to the stimulus provided as a pandemic response and the drop in interest rates to provide businesses relief, inflation would exist for a period of time but then go away on its own. This delusional thinking led to a drastic increase in prices worldwide as governments around the world continued to give stimulus packages. They created more money, increasing the money supply, while the Federal and other central banks kept interest rates low, further increasing the money supply. Supply chain problems and other interruptions in production caused by ongoing outbreaks and shutdowns, most specifically in China, caused a drastic drop in supply. During this period of time, both treasury secretary Janet Yellen and Fed chairman Jerome Powell continued to insist that inflation was transitory, even while most of the economic data seemed to indicate otherwise.

The Fed now has to be quick and increase its pace to get bank interest rates above the rate of inflation while not destroying the world economy. There was talk of the Fed engineering a soft landing, but that seems to not be the case. Economic principles tend to work like a force of nature. If The Fed chooses to slowly increase interest rates, it will only prolong a recession, rather than a sharp quick recession.

The Fed knows that it should’ve responded sooner to the previously labeled “transitory inflation” which has become anything but transitory. One factor to consider is the war between Russia and Ukraine which only increased the inflationary problems by further interrupting the food supply chain and the level of production for agricultural products worldwide. These problems were exacerbated by the sanctions the U.S. and Western Europe put on Russia and its allies. Russia and Ukraine are both significant producers of food products while Russia and Belarus are important producers of minerals and other rare earth materials.

In many ways, we are experiencing a tragic combination of bad decisions; by policymakers over stimulating the economy while the Fed keeps rates at low levels for a long period of time. That was added to by supply chain problems caused by international shutdowns, and finally the war between Russia and Ukraine.

High interest rates will invariably drop housing prices worldwide. (The USD which is the world’s reserve currency; when the rate rises it has world-wide ramifications.) The problem with this is the store of value that has preserved people’s wealth during the pandemic and the economic crisis that has followed, has been the wealth of fact caused by rising real estate values. Recessions and depressions are always caused by dropping real estate values. If enough properties get handed back to the banks, that will cause an increase of supply on the markets while prices continue to drop. If there’s nobody to buy that supply at those prices, it will cause a lack of liquidity that could turn into bank failures. When banks start to restrict withdrawals, as they have recently done in Lebanon, people start to lose confidence in their financial system.

Fortunately, things are not that bad in the United States at the moment. The U.S. Federal government is just deeply in debt, but not compared to the situation of Western Europe where the future of the Euro could be in question. Europe also suffers from a potential lack of energy as it is reliant on Russia for most of its natural gas and oil. The conflict between Ukraine and Russia could end up leading to a shut down of European fuel supplies.

Most people do not realize that credit is effectively the same as cash when it is created or allowed to be created by the Central Bank. Controlling the amount of credit and cash in an economy is the main job of the Fed. Unfortunately the combination of events related to the pandemic, allowed for these key controls to get out of control. The Fed now seems to be doing its job to get inflation under control, but unfortunately the remedy is not going to be pleasant. Economic failures and a prolonged recession may be the only way to get inflation back under control.

The United States has been in this kind of situation once before, where the economy was in a state of stagflation and inflation was raging out of control. Paul Volcker, the Fed chairman of the 1980s, provided us with a recipe to navigate the economy back to solvency. Currently, the Fed will need to quicken its pace and stay disciplined to its method in order to execute that remedy to control inflation. More than likely, the economic damage that will be done to people’s lives and businesses will be significant.

In conclusion, we need to expect that the Fed will continue to raise interest rates through all of 2023 unless it makes the hard decision to do one large increase to get interest rates closer to being above the rate of inflation. We can certainly expect the next Fed meeting to include a 75 or more basis point rate hike.