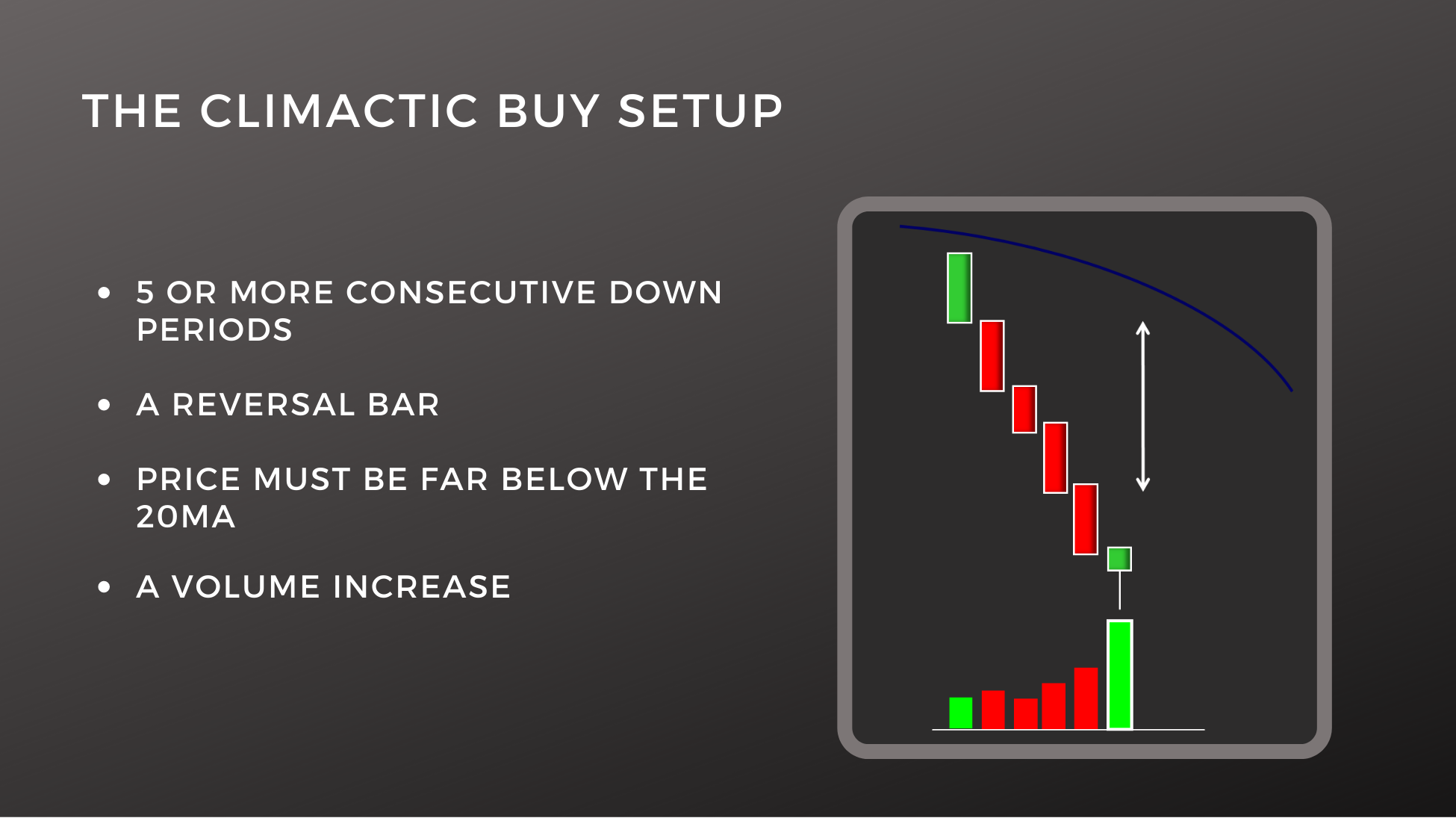 The Climactic Buy Setup is similar to a regular buy setup, with the exception of trend considerations. The climactic buy setup can happen in an uptrend, sideways trend or downtrend (a downtrend is where it occurs most frequently). A regular buy setup needs 3-5 down bars, whereas a climactic buy setup gets better after 5 bars (usually somewhere between 5-10 down bars). The other necessary requirement of a climactic buy setup is a drastic increase in volume on the final 1-2 bars. We call this stopping volume or reversal volume, meaning anyone wanting to sell the stock was able to get out and anybody wanting to buy the stock could get it, but that price is no longer dropping, yet the volume is drastically increasing. This means that the reverse is imminent. Generally, this will form a reversal bar; usually a narrow range bar, a Doji, or a reversal hammer. This is the final critical criteria before the setup is complete. 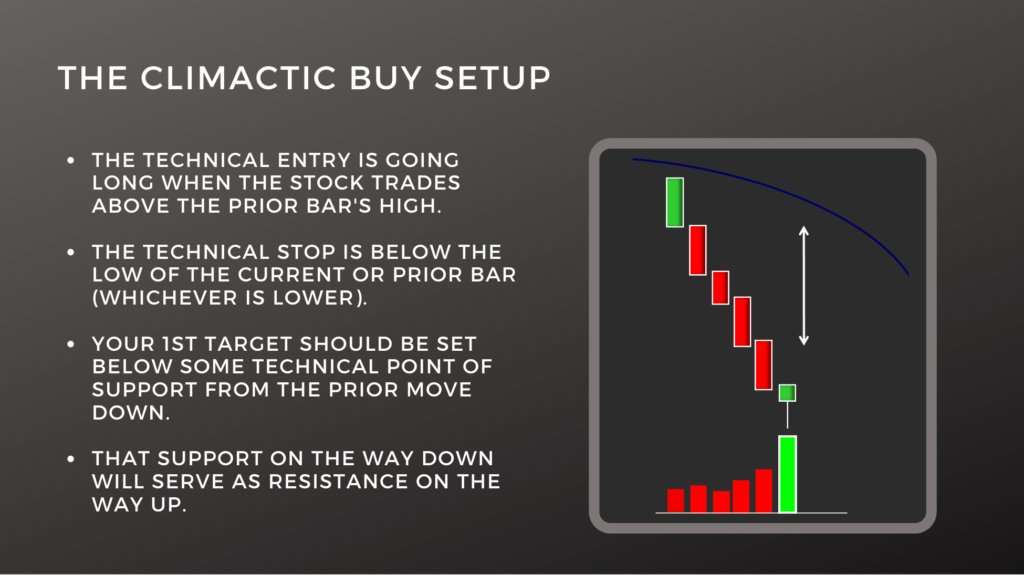 he trigger on the climactic buy set up is when the price passes the high of the reversal bar. The target is usually 40% – 50% of the prior move down. The alternative target is a declining moving average. This makes the size of the prior move important, as it helps give larger profit potential if the prior move down is large. The technical stop is below the low of the entire pattern. Remember that this is a volatility pattern, so having a stop and keeping your stop is extremely important.

A special consideration to be mindful of is that climactic buy setups are countertrend trades. In many cases, the moves happen fast, and oftentimes violent price action is part of the reversal. This makes it important to take your profits quickly.

The 10 or 20 moving average must be far below the current price. The further away, the better as this will be one of the key indicators to use as a target when it comes time to get out of the trade.

Finally, volume must be climactic, meaning far greater than the previous bars. The big volume bar should be lined up with the reversal bar. If this is a swing trade, One could preemptively enter it near the end of the day as it is common that if the climactic sell setup closes with a bearish reversal bar and there is a gap down the following day.

Please note that the correct entry, called the technical entry, is to short/sell this particular set up as it crosses the low of the red reversal bar. 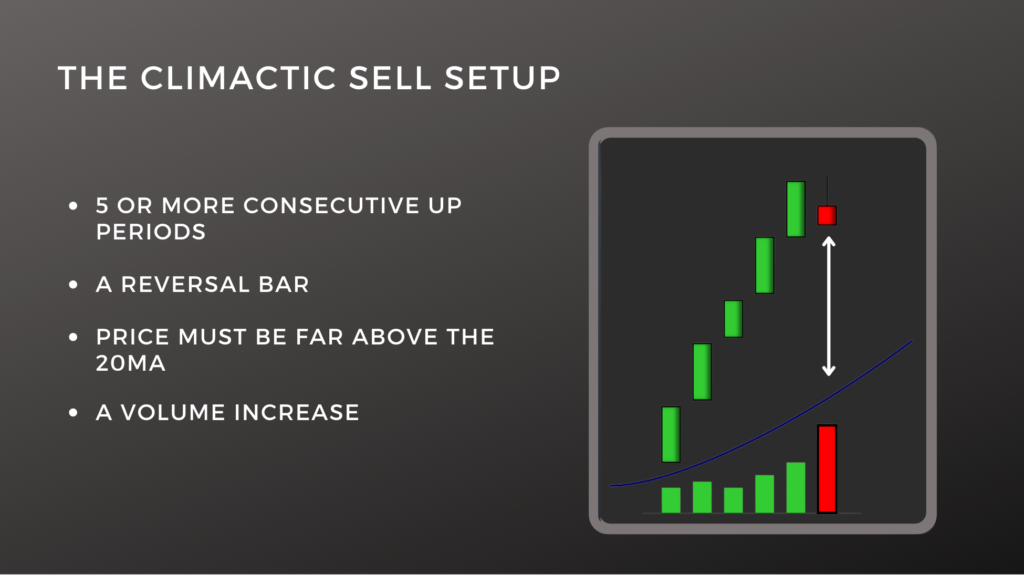 The DAS Trader chart below is an example of the climactic sell setup. This is a chart of Apple ($AAPL) which shows an amazing 11 bar up move. Notice the stock quickly drops down to the moving average after it triggers its entry (which is the break below the reversal bar indicated by the dark blue line). The stop is the red line which is above all prior price resistance. The ideal target is the green line near the rising 50 moving average (indicated by the light blue line). 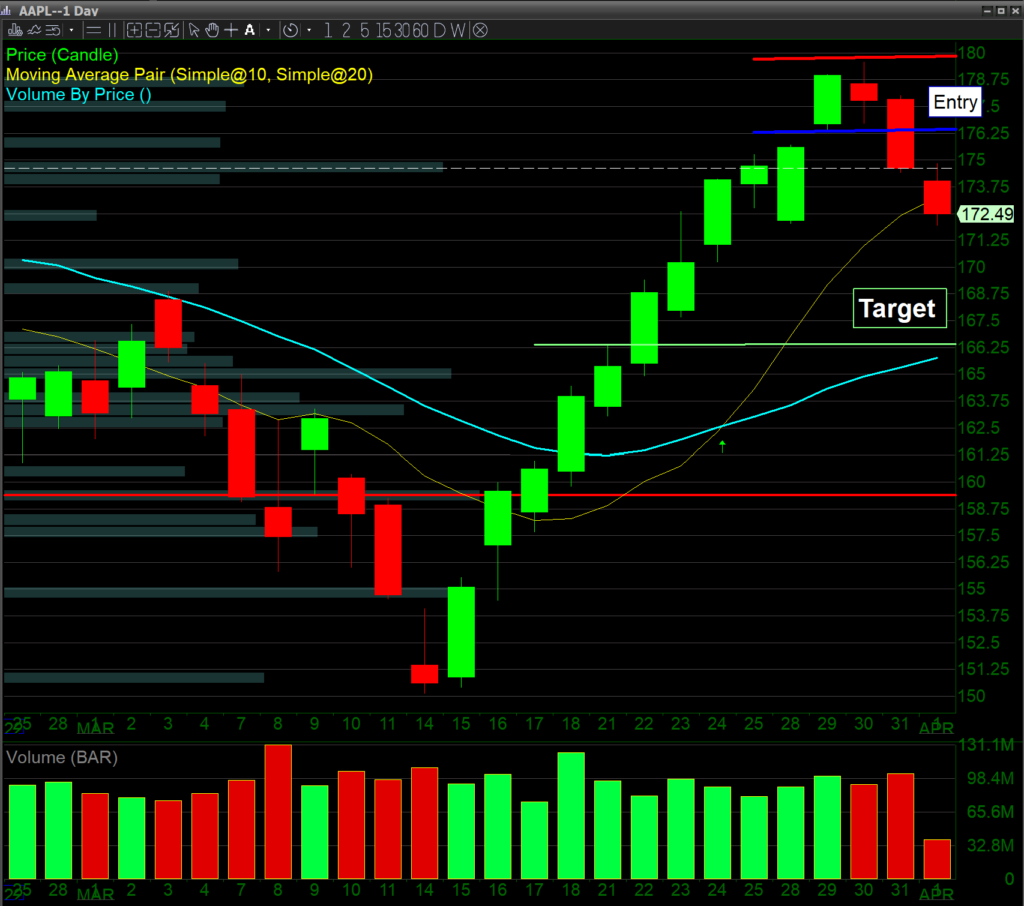 The technical stop should be above the high established from the current move to the upside. Avoid getting stopped out in high volatility markets by making the stop at least .05% above that high. The technical target should be about 30% to 40% of the move down, which will usually be close to one of the moving averages (usually the 20 or 50 MA). 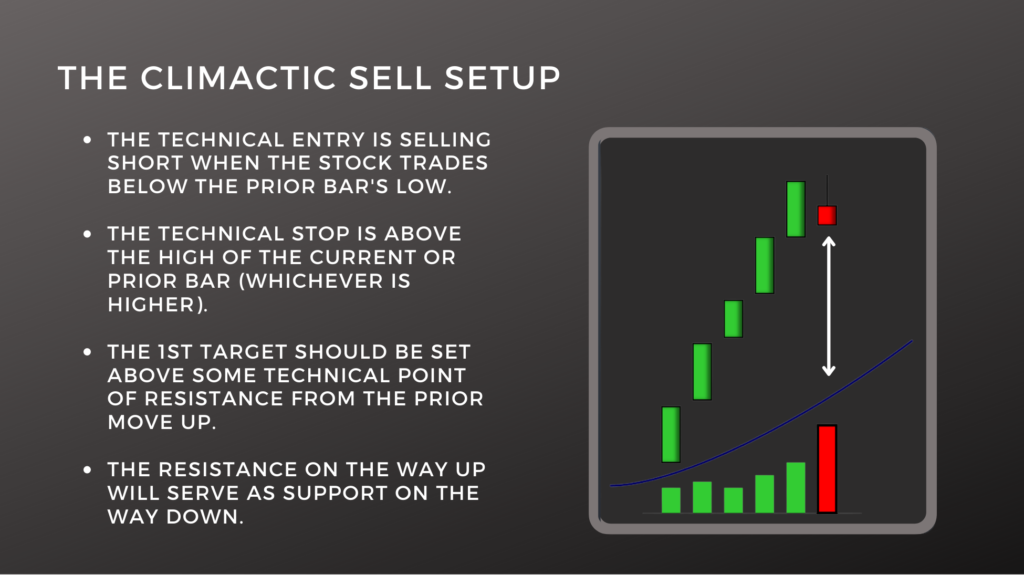 Use this pattern well and trade carefully.