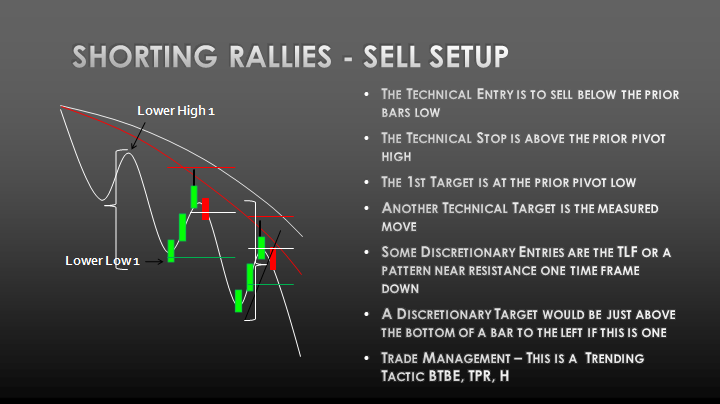 Professional traders need to be able to make money in all market conditions; not just when the market goes up. One of the ways traders profit from the downside is by selling short. Let’s explore what that actually means.

Generally, the phrase “I’m short” means I do not have something. This is how short selling works: A trader sells something they do not own with the expectation that they will replace what they’re short at a later time and at a cheaper price.

When opening a brokerage account, it is common to sign a margin and short agreement. That agreement allows the broker to borrow and re-hypothecate your shares to be short sold to other traders. In exchange for this, you are given margin which, for day traders, is usually 4 to 1 intraday buying power or 2 to 1 overnight buying power as long as your account maintains over $25K daily starting balance.

Imagine the brokerage firm where you have your account has thousands of brokerage accounts. Thousands of those accounts are also holding long stock positions inside their margin accounts. Those long stock positions are available to be lent/borrowed to be short sold to short term traders. This process is called re-hypothecation. The stocks that are in the clearing firms’ accounts are generally the stocks on the “easy to borrow” list. In order for you to short sell the stock, your broker must be able to give you a locate. If the stock is on the “easy to borrow” list, the locate is usually provided for free. If the stock is hard to borrow then the broker may charge you a “hard to borrow” fee for finding the shares for you to locate. Many professional traders prefer to go short over going long because stocks tend down to go faster than they go up.

The ABC company shows as an “easy to borrow” ETB stock. Since the broker pre-loaded the ETB list, the software will automatically re-hypothecate the shares. If the shares are not on the ETB list the trader can do an electronic locate and try to get the locate for a fee. Here, the trader can hit “sell short” at $20. When the stock goes down the trader can hit “buy to cover” when the stock is at $18. The borrowed shares that were sold at $20 were bought and replaced at $18, making a two dollar profit on the downside. 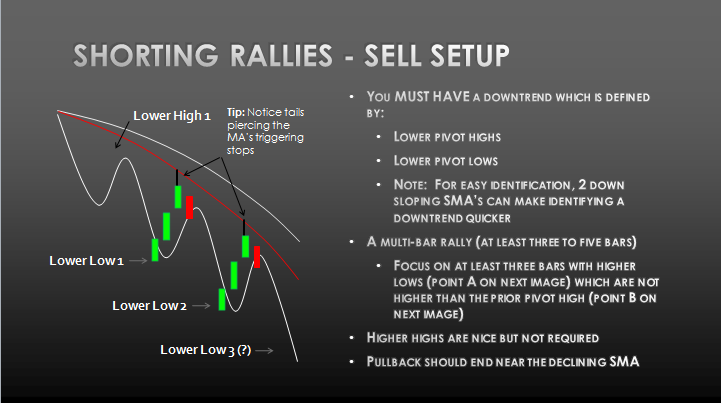 A sell setup needs at least three bars up into the declining moving averages. On the sell setup, focus on the last three bars having higher lows. The trigger bar is when the newest bar crosses below the prior bar’s low which triggers the entry. Selling short is a bit more difficult because you need to have an uptick, so, many traders will offer out their shares at the moving averages. Once in the trade, your stop goes above the prior bar’s high. For a target, try to run the trade to the next major area of support from somewhere on the left of your chart. Some traders use a trailing stop as stocks tend to go down violently as fear is a more powerful emotion than greed.

Until next time, trade well.