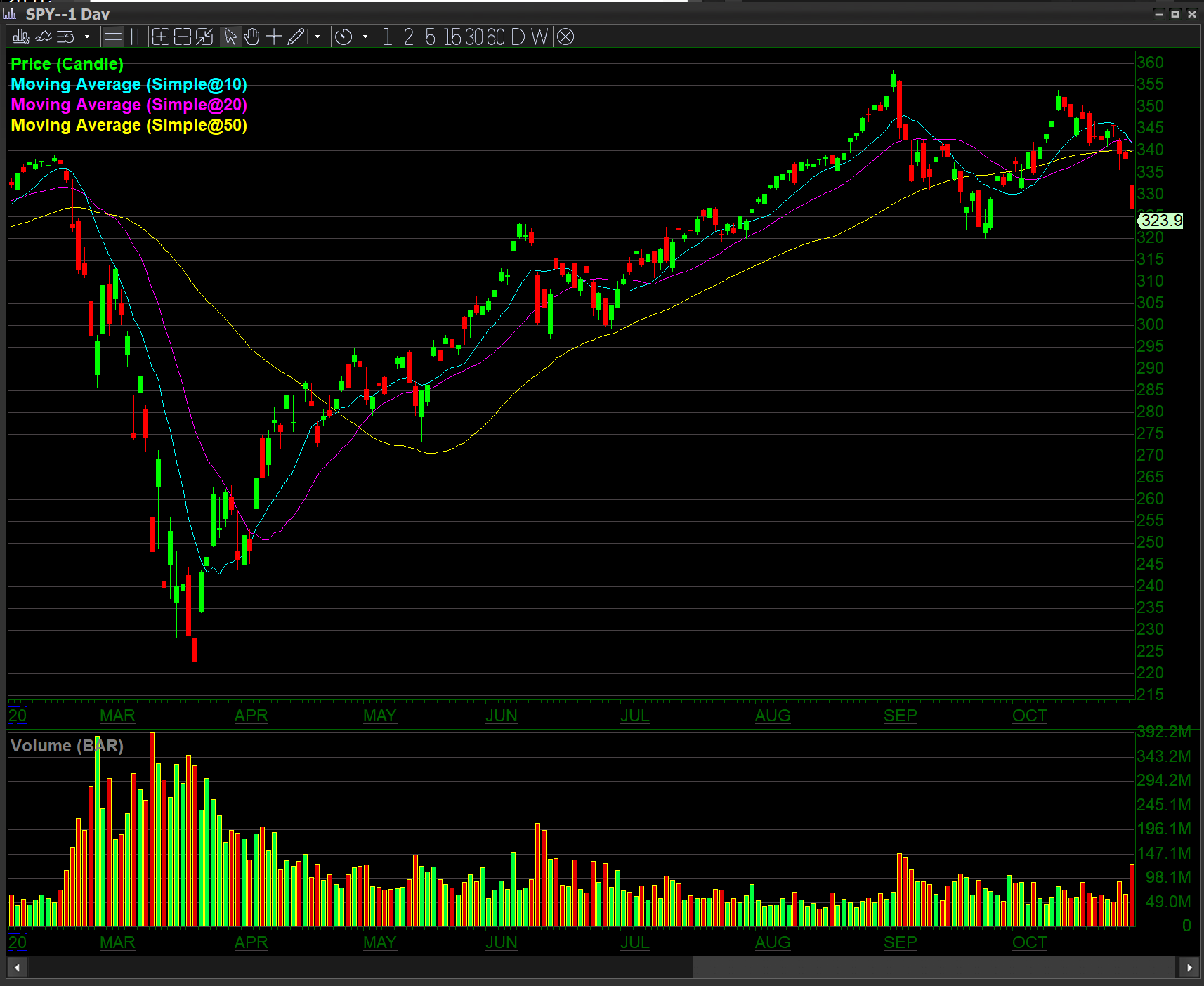 As we move into fall, we finally got our move down off the highs of the markets. This is a healthy correction of about 10% which was started in the tech giants FANG ($FB, $AAPL, $NFLX, $GOOG) and M ($MSFT). (See chart below) The move has lasted for a full 3 and 1/2 weeks making September the most bearish month since the start of the pandemic (February or March). All three major indexes represented by their respective tradable ETFs $DIA, $SPY and $QQQ, drifted lower as hopes for a stimulus bill lagged and dragged through Congress. 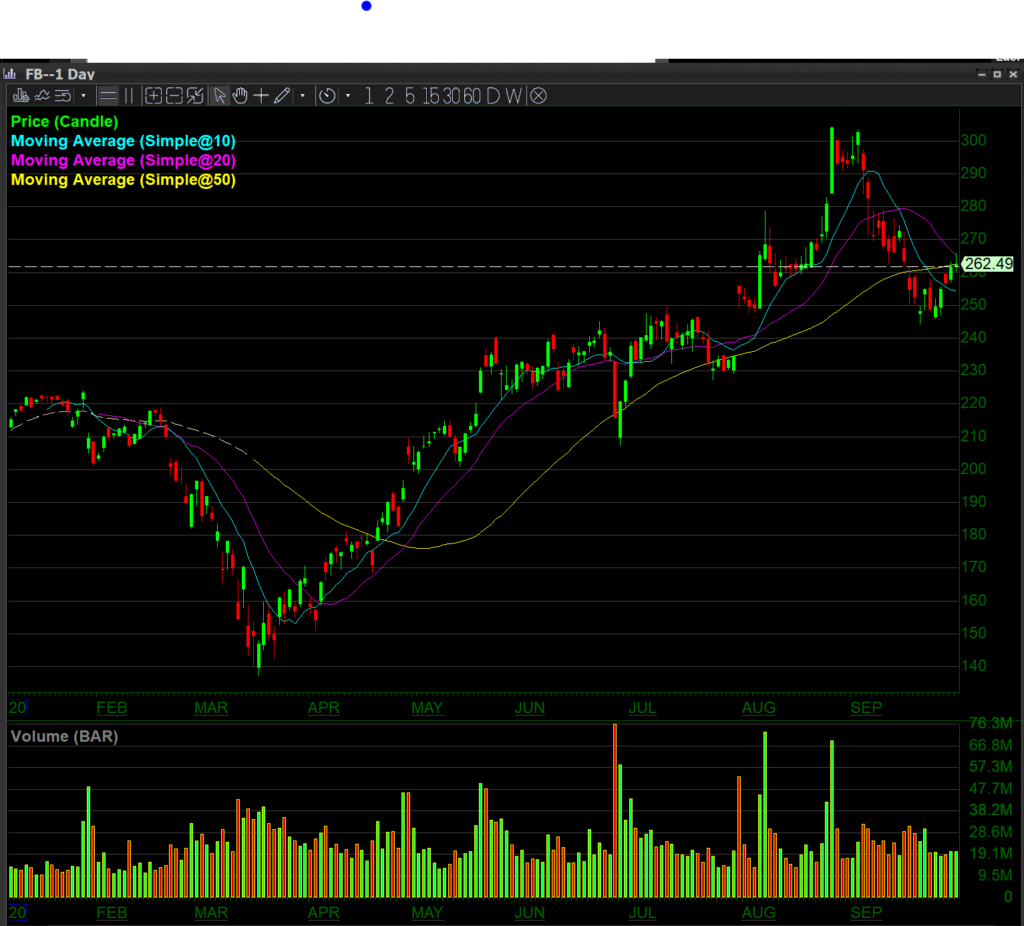 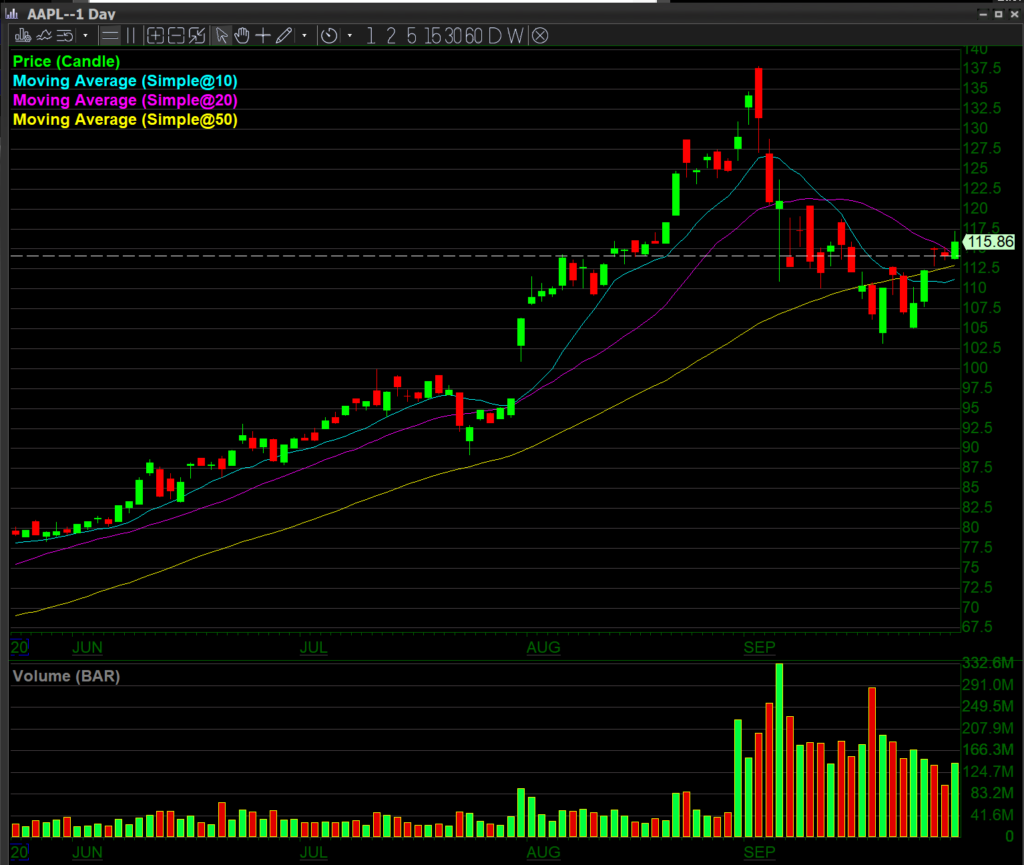 $AAPL is the new prime mover of tech, everyone is waiting to see the new 5G iphone. It could mean boom or bust for the stock.

$NFLX has been the weak man of the tech giants for sometime. It has put in a double top and now everyone is just waiting for the drop. 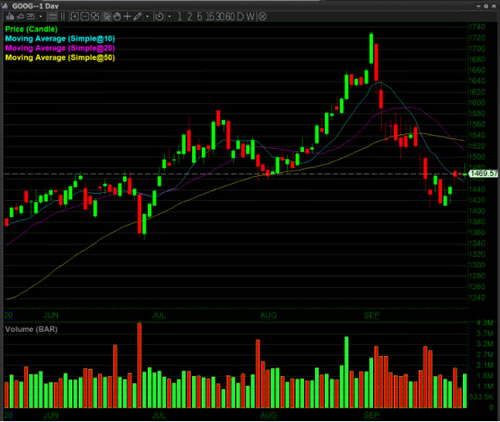 $GOOG is the other weak man of the tech giants, it does dominate its space so it is the most likely target for regulation. 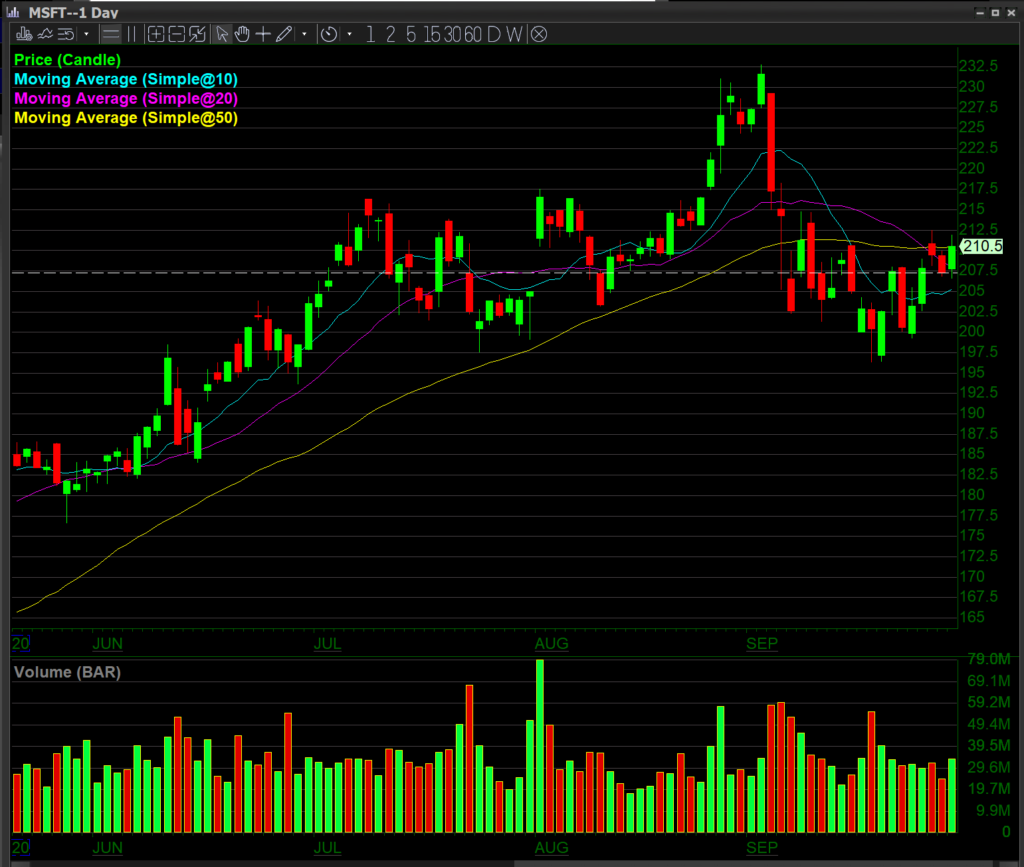 $MSFT the forget target of the government, also always being watched as a monopoly. 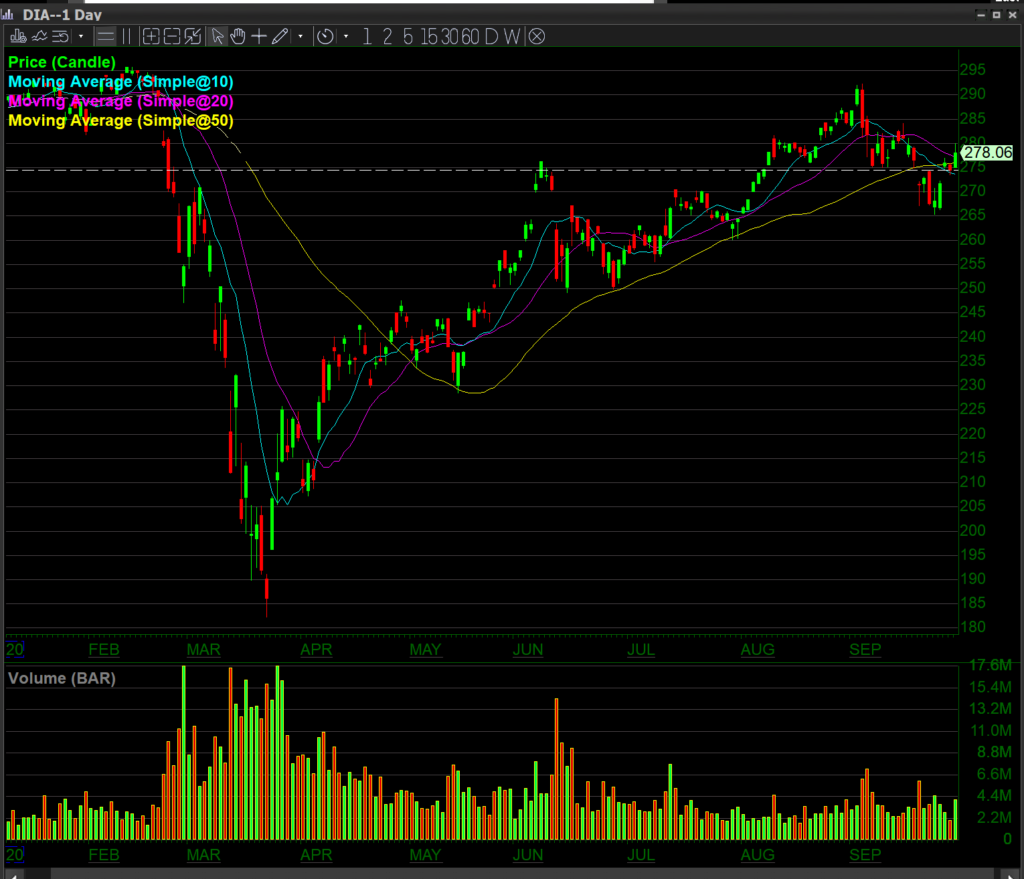 $DIA – A 5 day rally to the 50 MA should lead to another drop. Remember this is a new month and window dressing is now over. Be on the lookout for the next bearish move down. 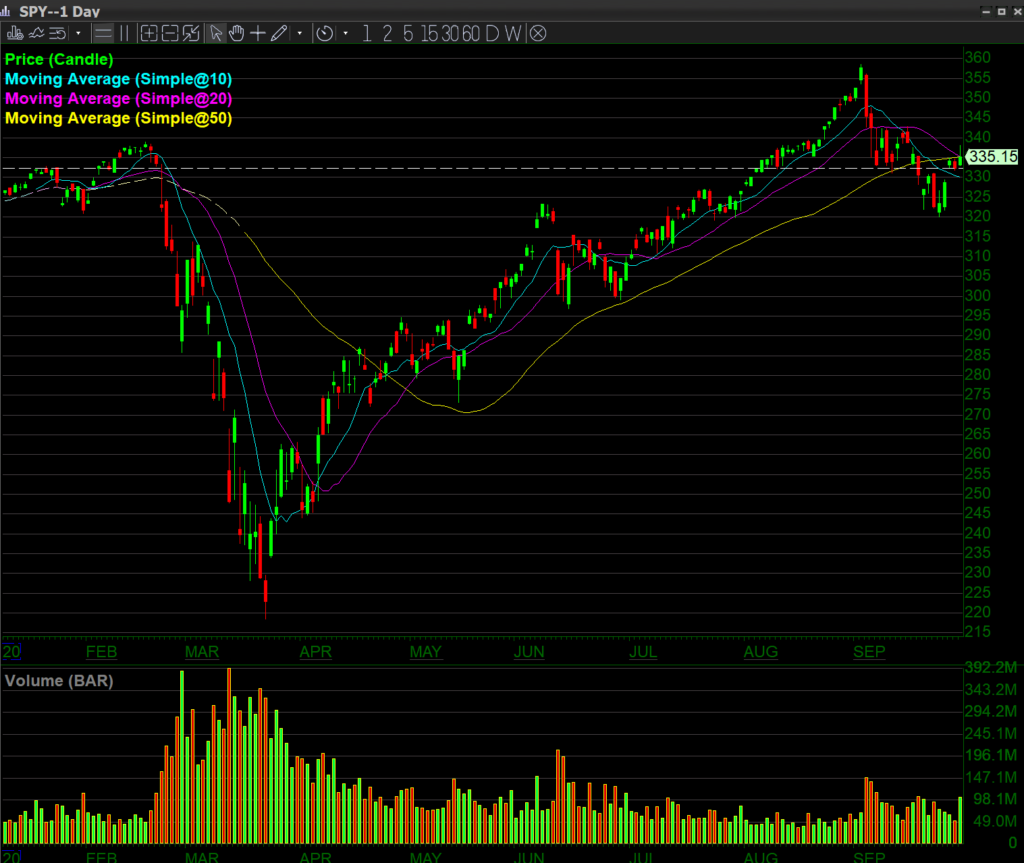 $SPY is pretty much the same as the $DIA. 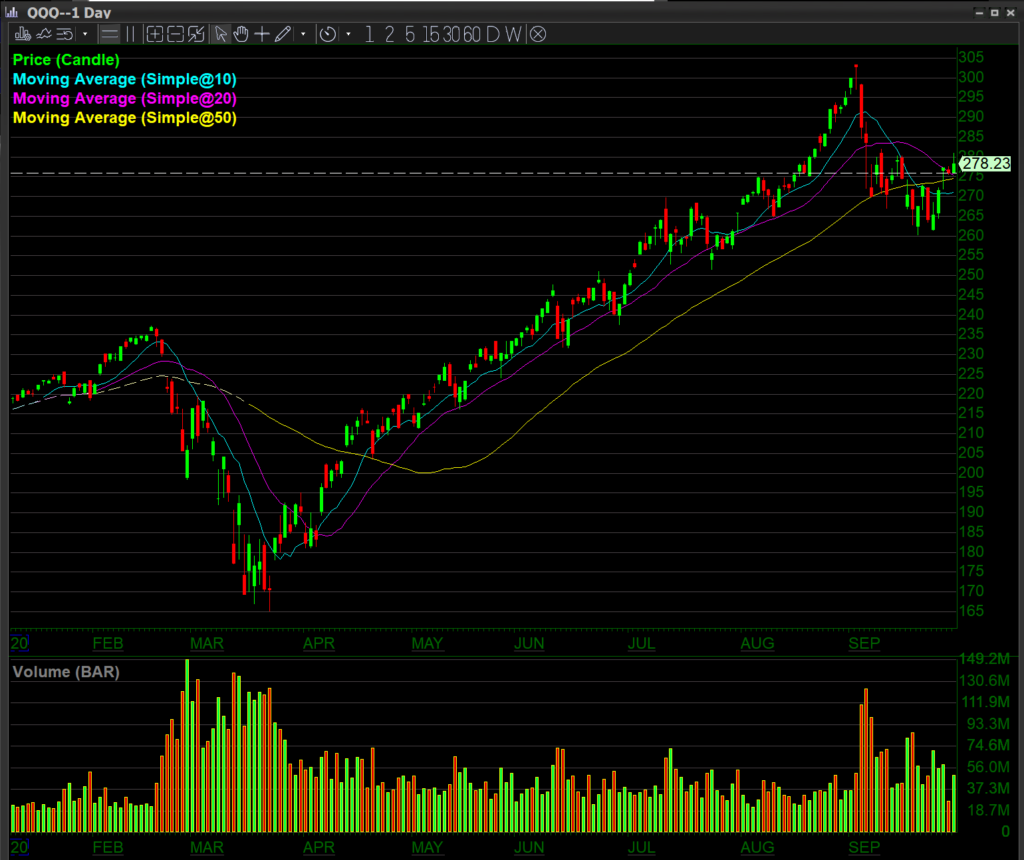 $QQQ: Tech leads the way up and should lead the way down as it did on the first move.

In the post pandemic world, financial markets now respond to free or cheap government money instead of commercial prospects. The tech giants react to fears or threats of regulation as they dominate their receptive industries.

This seems to be the new financial environment that we live in. It is great for traders as well as nimble investors that know when to get out and when to get back in.

The mess that was the first presidential debate seems to be an indication of the kind of uncertainty that we face coming into the month of October. There is also the added uncertainty that the normal smooth transition of power may be in question during an already unpredictable time in the financial markets. The current environment is one where we need to worry about fake news, questionable mail-in-ballots, a contested election, and the approval of a new Supreme Court justice in the final month before a presidential election.

Markets like these, are the best for people who day trade, swing trade or invest with a sense of timing. While navigating these markets, you need powerful trading tools like the DAS Trader software which offers great charts, level II data, fast execution and other momentum indicators like the trade signal scanner.

As we have been saying for the last few months, markets don’t go in just one direction and fundamental analysis does eventually kick in. If tech stocks get too overvalued, they need to eventually correct and that’s exactly what we saw in September. As tech stocks corrected, they dragged down the rest of the index of which they make up a major part.

Price is a good representation of value. It reflects the true cost of what you can buy or sell something at that exact moment. We don’t always know the exact reason for the changing price, but the reason usually comes shortly after.

We now know that weakness in the U.S. dollar has caused tech stocks to become a store of value. Gold and bitcoin have served the same purpose. In this pandemic world, governments are printing money at an alarming rate, adding debt to their currencies. Stocks became the one place, beside gold and bitcoin, that you could get a return on your investment.

We reaffirm that, “Investing long term in the stock market at these high levels after a global pandemic does not seem like a rational thing to do. Sitting and waiting for things to become more clear seems like the most prudent plan.”

This month, we will look at a selection of stocks, like the tech giants and many value stocks such as $XOM, $MO, $BA, $MMM, $FCX, $X and $F that have withstood the test of time and now provide good value. 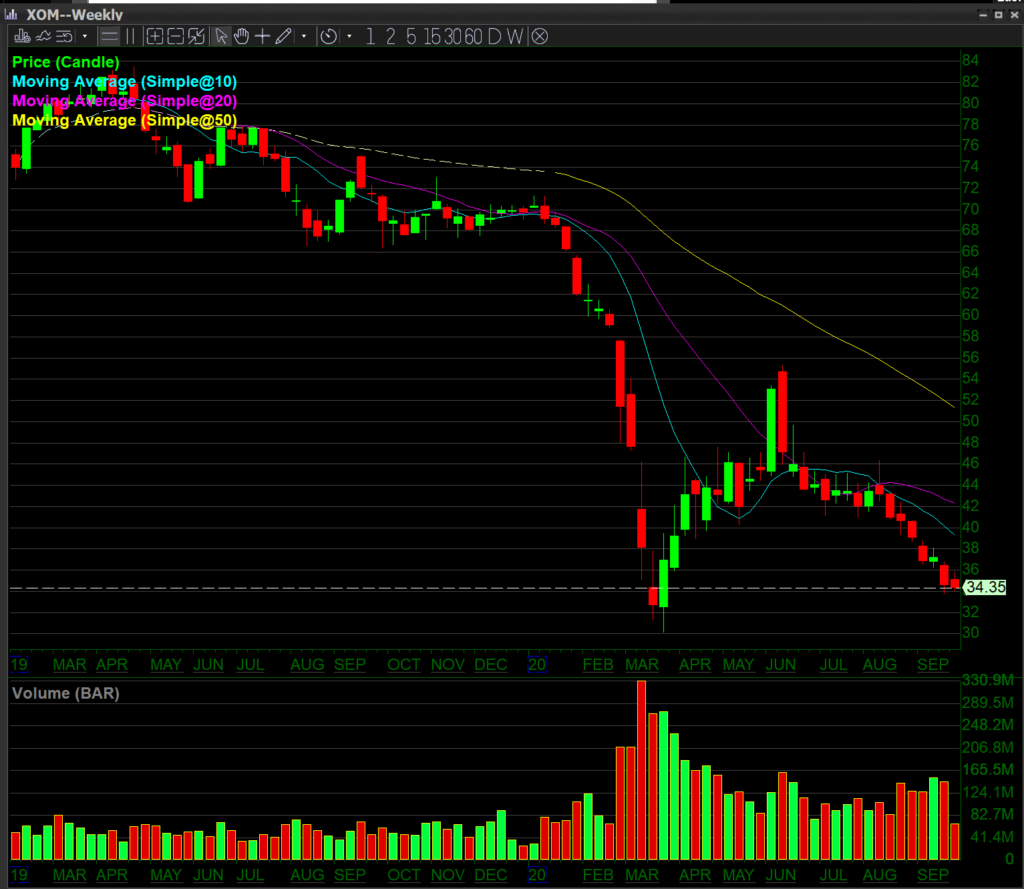 $XOM is very close to double bottom prices. A great company at a great price. A good value stock. 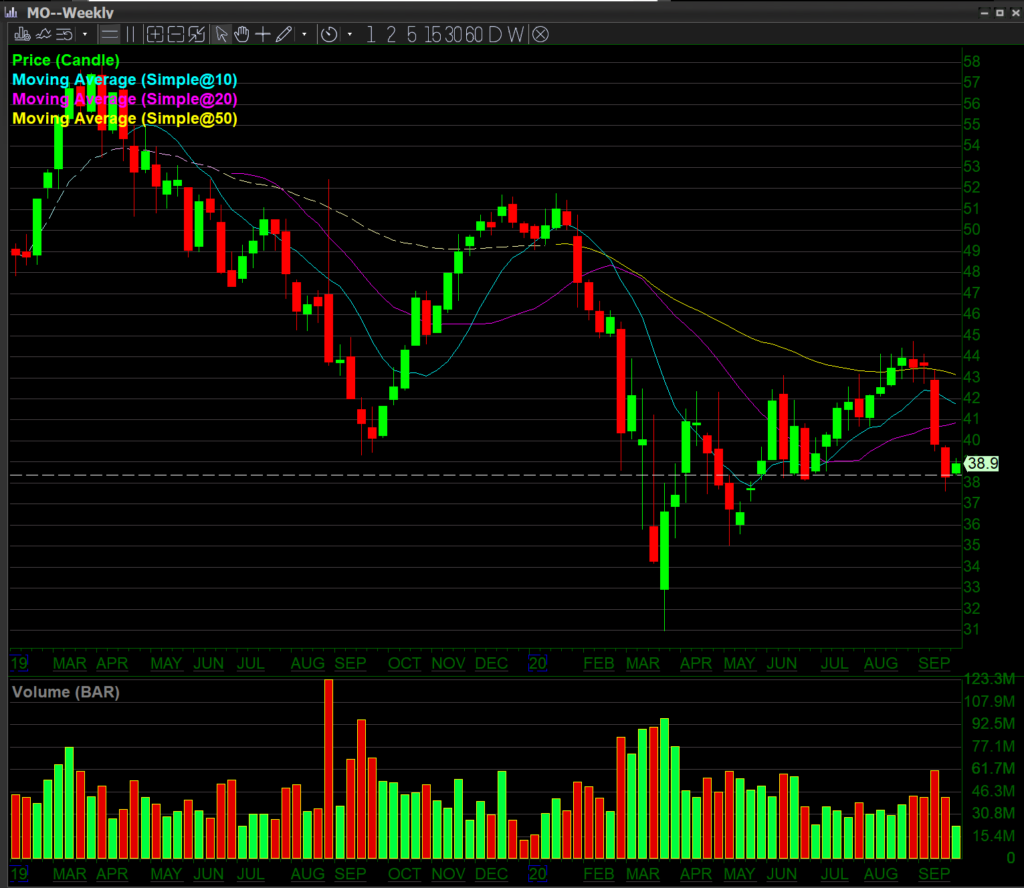 $MO and $PM are both good value companies that are worth watching. 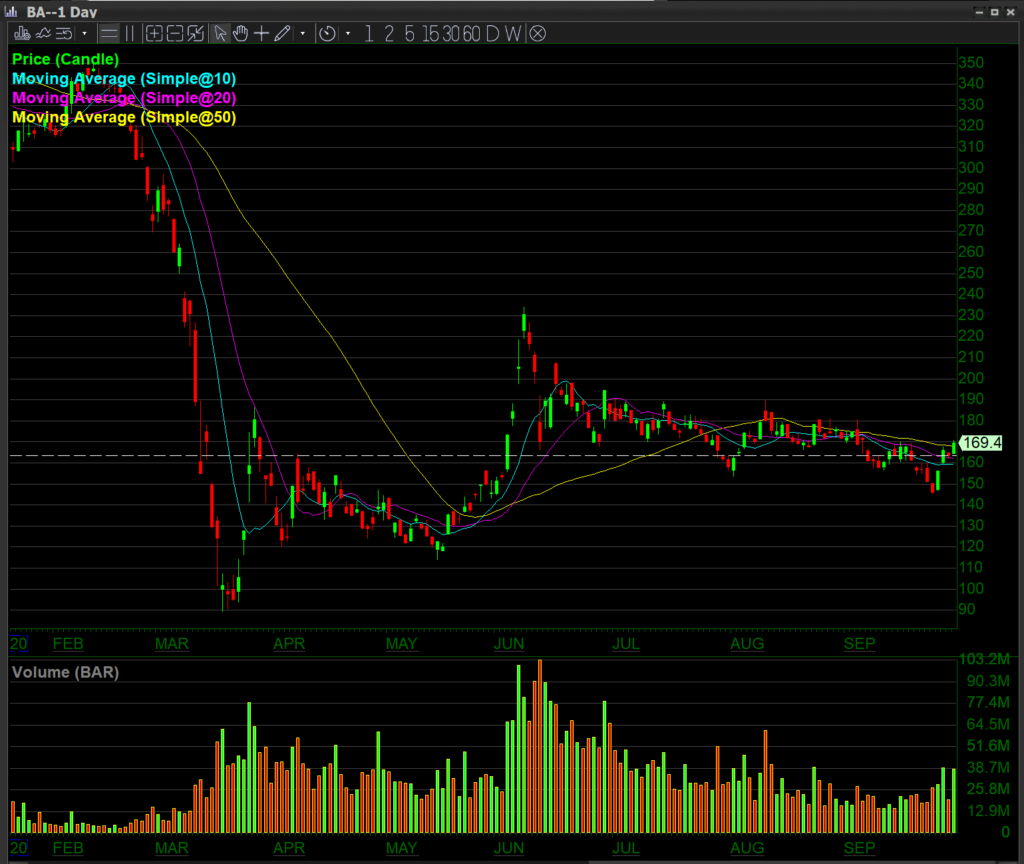 $BA looks like it is starting to rally; war seems more likely in a lot of places. 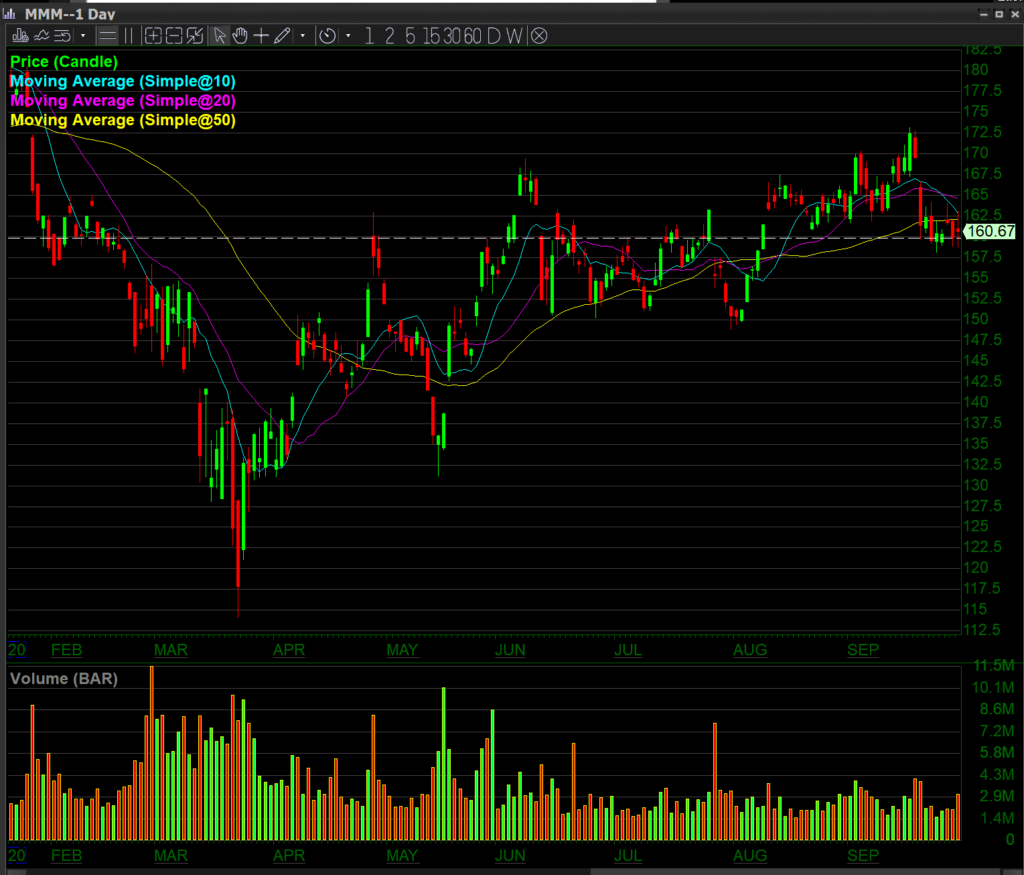 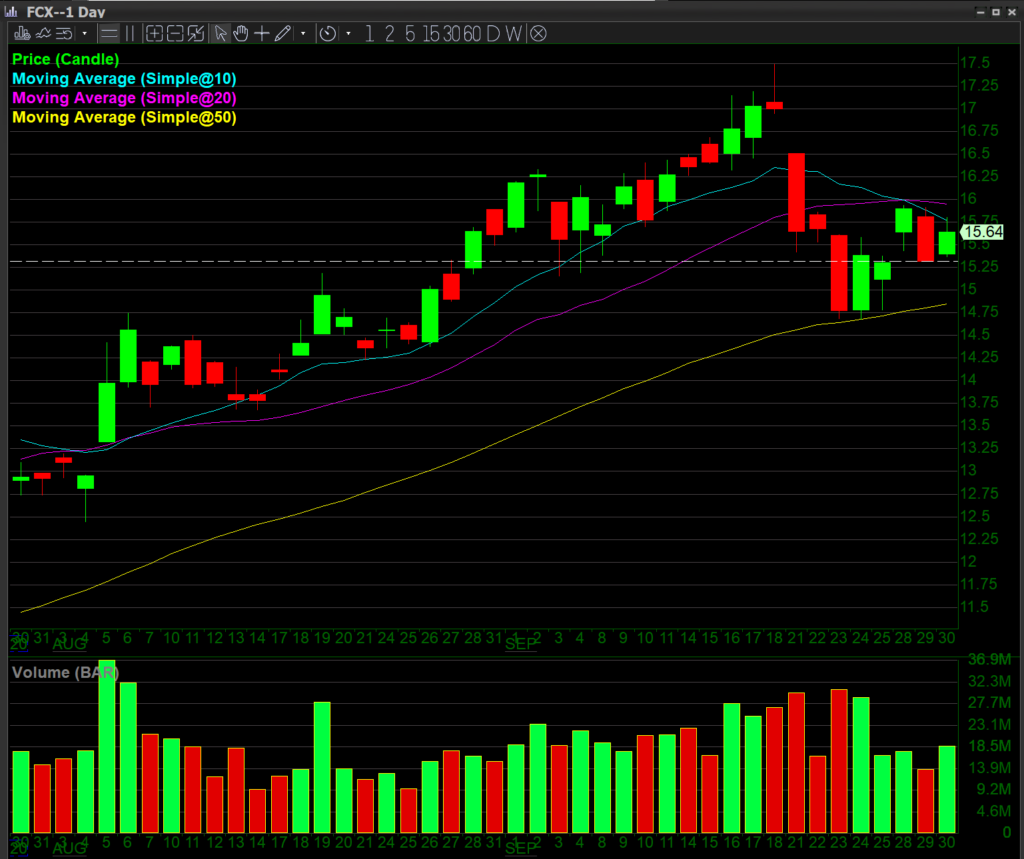 $FCX has benefited from the low interest rates, but also in the price of commodities. 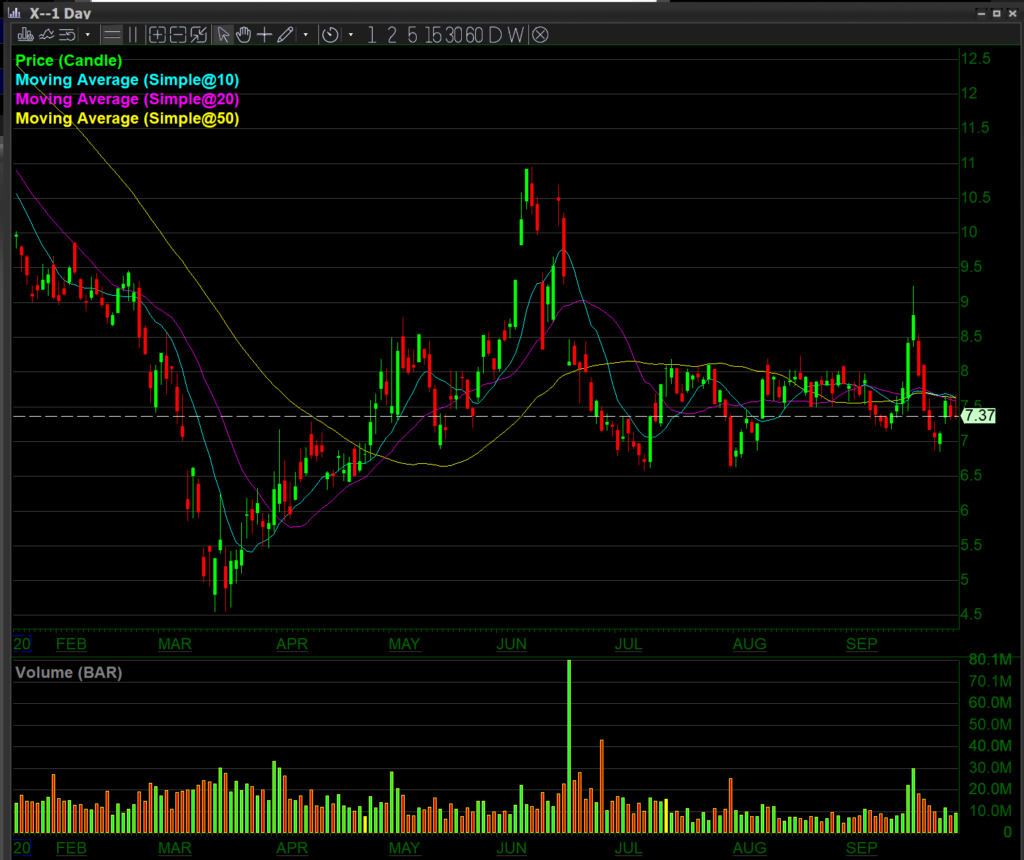 $X – U.S. Steel also seems to be at a great price level here. It may be worth the watch. 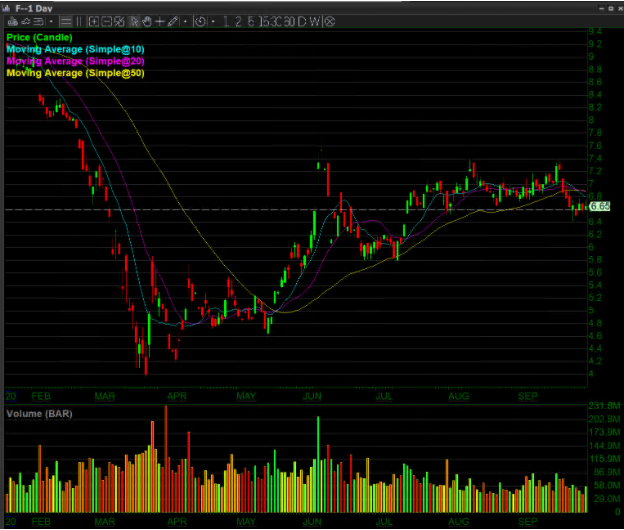 $F the Strongest and most efficient of the US Automakers also worth watching as a great value stock, with a great dividend.

$GLD and BTC have done great as a hedge of dollar weakness but have suffered a bit as the dollar has strengthened. No new money has been printed with a stimulus package which has given the dollar regained strength. As Congress fights over the terms of that stimulus, the Fed has already run out of bullets if the Congress does not act. The dollar will then strengthen as other governments around the world keep the debt printing presses on. This is how the game works and at least now the movers are clear. 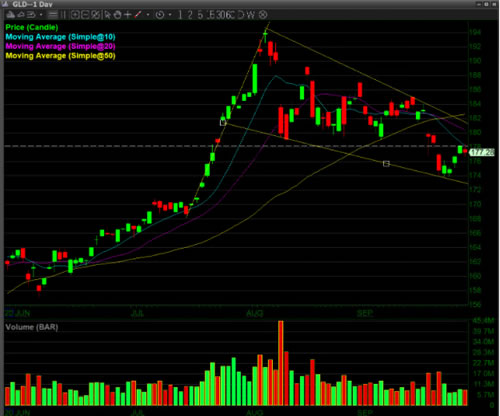 $GLD is forming a bull flag and might be getting ready for another run to the upside.

The month of September proved that our neutral to bearish words of caution were the right call for a market that was very overbought and ready for a sharp correction. That correction is most likely not finished. We still have one month until the election, which is a very strong reason for markets to correct even more. If the election is contested then we expect more downside, but we need a wash out and resolution of this uncertainty for things to resume to the upside.

New York has finally begun to reopen just as the numbers have started to increase in many parts of the city. The never ending COVID-19 scare continues around the world as Europe (Spain, France and the U.K.) are experiencing a full blown second wave. In the U.S., we may not be able say the first wave ever ended, but instead moved around different parts of the country.

Most of the world is now opting for only local lockdowns as it is politically impossible to completely lock down again, although there are exceptions. Israel did a complete lockdown during the high holidays and the U.K. required masks nationwide while all bars and restaurants were to close at 10 PM. All of these measures were met with resistance from small business owners who have been struggling to keep their businesses afloat.

Brazil is now entering summer and cases are decreasing while India is rapidly becoming the new epicenter. Experts say we can expect this trend to continue as the northern hemisphere moves into cooler temperatures.

As we have been saying over the past few months, the market was bound to correct eventually. That correction started in September and should continue until the conclusion of the U.S. election. This year, we don’t know if the conclusion will come on November 4th or sometime later in the month. Markets love certainty and dislike uncertainty. With that being said, this is the best traders market that we’ve had in the last 13 years, so enjoy it while it lasts. Most likely, whatever happens after the election will only lead to more downside action for most stocks as the entire world heads into a long overdue recession that was only started with the beginning of the pandemic. No one has a crystal ball, but the long-term effects of the pandemic will be with us for the next 3 – 5 years. If that means more volatility then that is a good thing for traders.

REMINDER: The Fall Intermediate #1 Best Trader Competition is coming up! Registration is still open through Sunday (10/4). The competition begins Monday (10/5) and runs for 10 trading days.

Best of luck to you all. This is not investment advice by any means, but an outlook of things that might be to come. Trade Well & Stay Safe.