Double top….Drop! As expected, the major indices (represented by the ETF’s: $QQQ, $SPY, and $DIA) have started to correct as we have gotten closer to Election Day. Is this just a correction or is it the start of a major sell off as we saw at the onset of the pandemic? Will it continue after the election is resolved? In either case, this is exactly what we have been warning our readers to expect as we got closer to the election. Markets hate uncertainty and a major presidential election that could have a contested outcome is a massive amount of impending uncertainty. 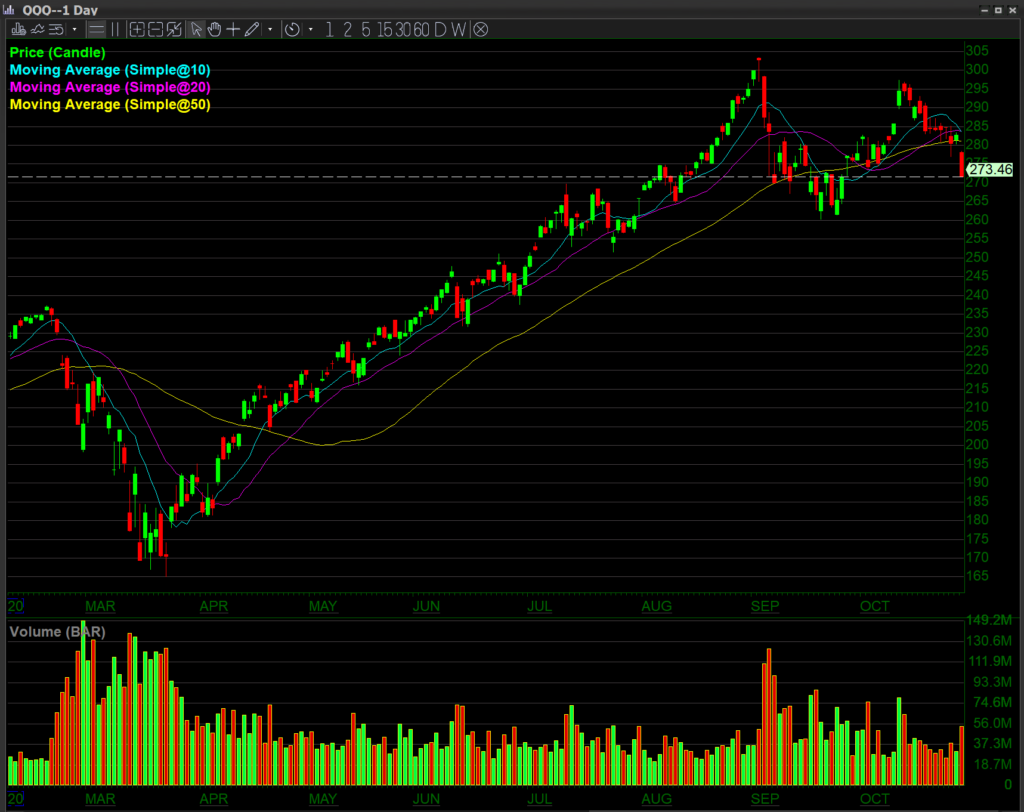 $QQQ has led the way up and and out of the post pandemic selloff, even breaking and making new highs… but now it looks like the party is over. A lower high and now a cross below the 10,20 and 50 MA’s (Moving Average) is very bearish for what was the strongest market index. The tech heavy Nasdaq 100 and it’s tradable ETF tracker the $QQQ. 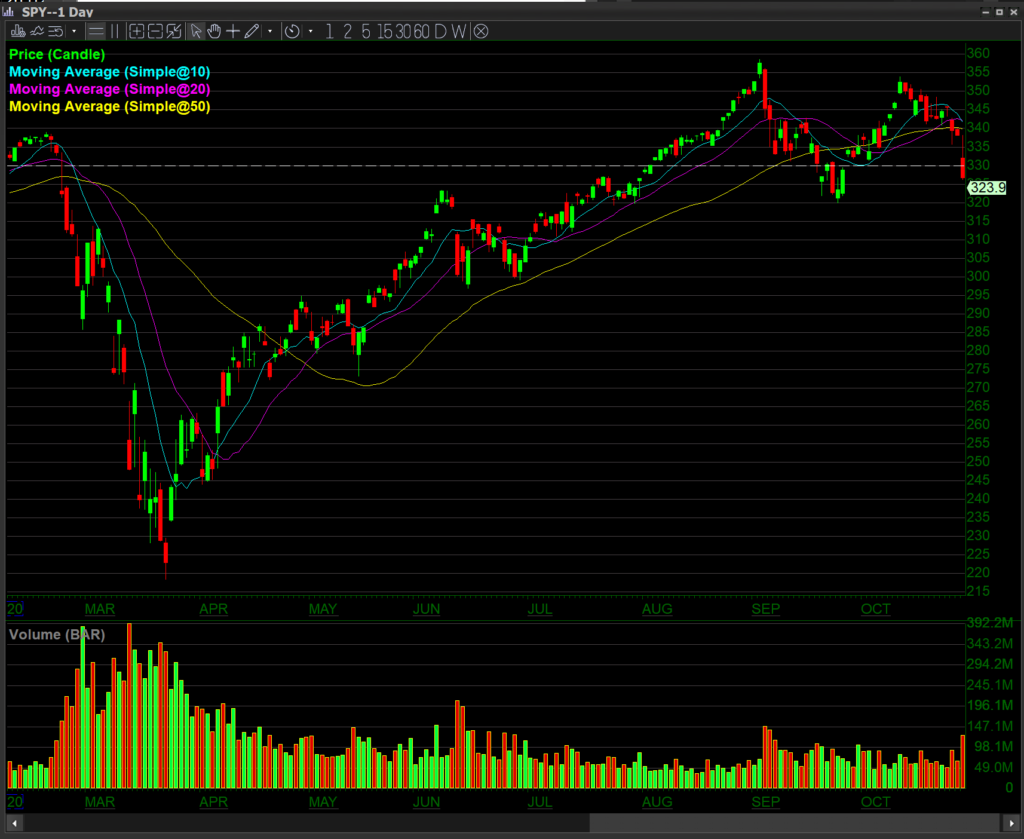 The $SPY looks like it has started to roll over as well after putting in a Double Top. The last market high was lower than the August high indicating that traders and investors were anxious to take their profits at the 350-354 area. The real concern is a break below major support at 320.  If it does break that 320 support level, the next level would be a long way down to 300 even. 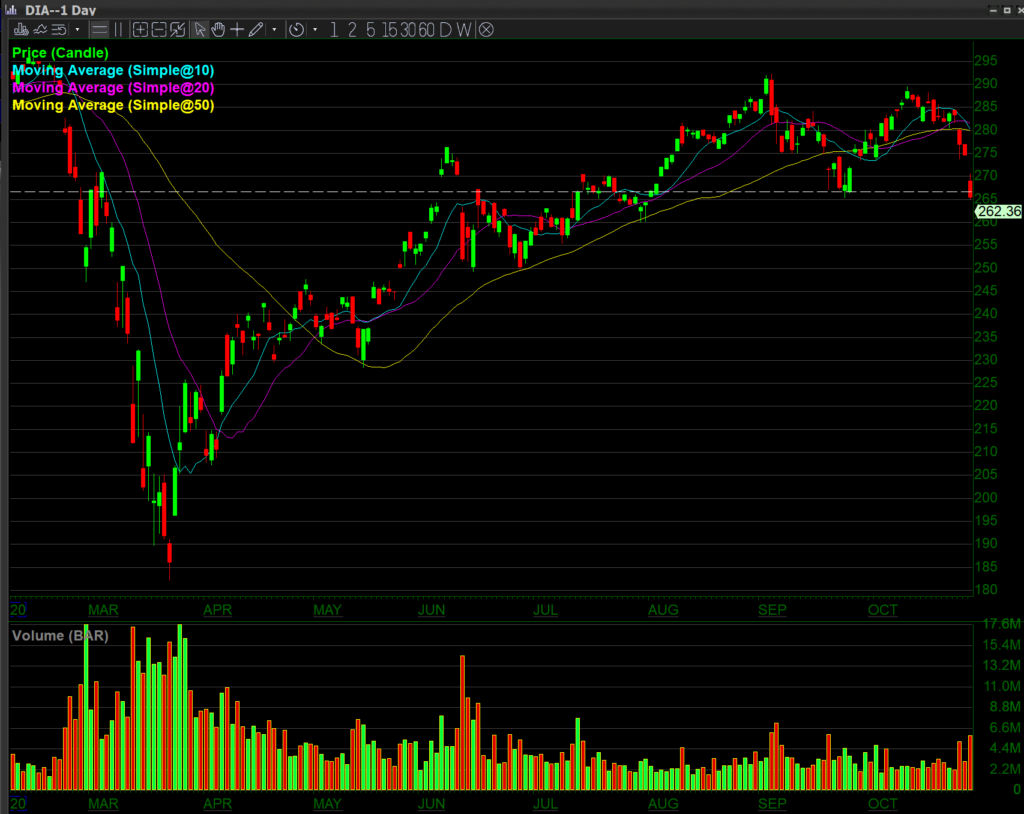 As we have said before, the financial markets seem to be broken and are responding to a different drum these days. The primary mover of the financial markets should be earnings. Instead, it has been a government stimulus, this should not be the case in a capitalist-based economy. We have all watched the drama play out over the past month as Congress and the White House have gone back and forth discussing, but not passing another stimulus package.

We were correct by watching big tech: $AAPL, $FB, $NFLX, $GOOG, $AMZN, and $MSFT as they laid the market up and gave early indications that this market was getting ready to roll over. As you can see from the charts below, all of the up trends of the tech giants are very mature and starting to show signs that they are running out of steam. 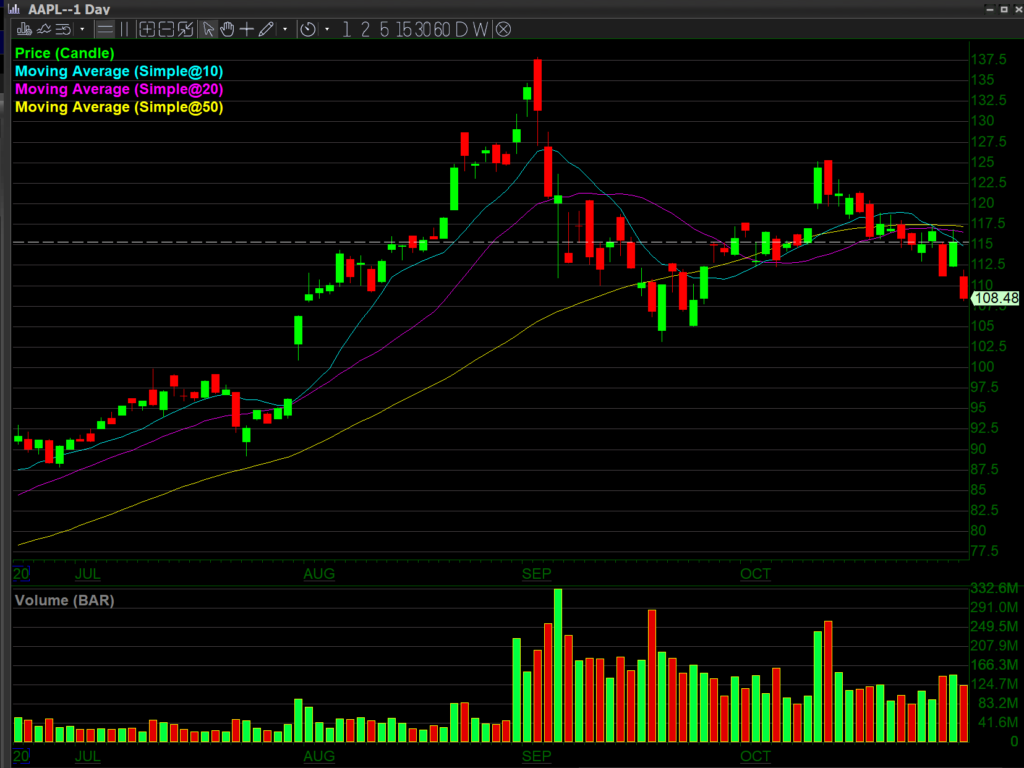 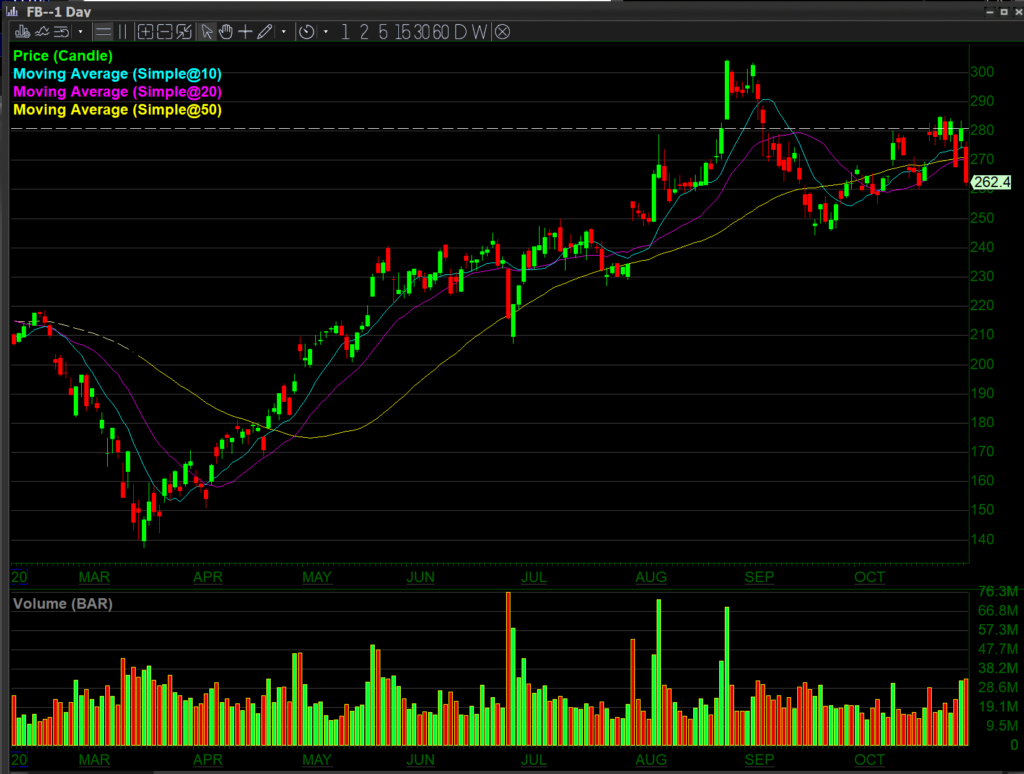 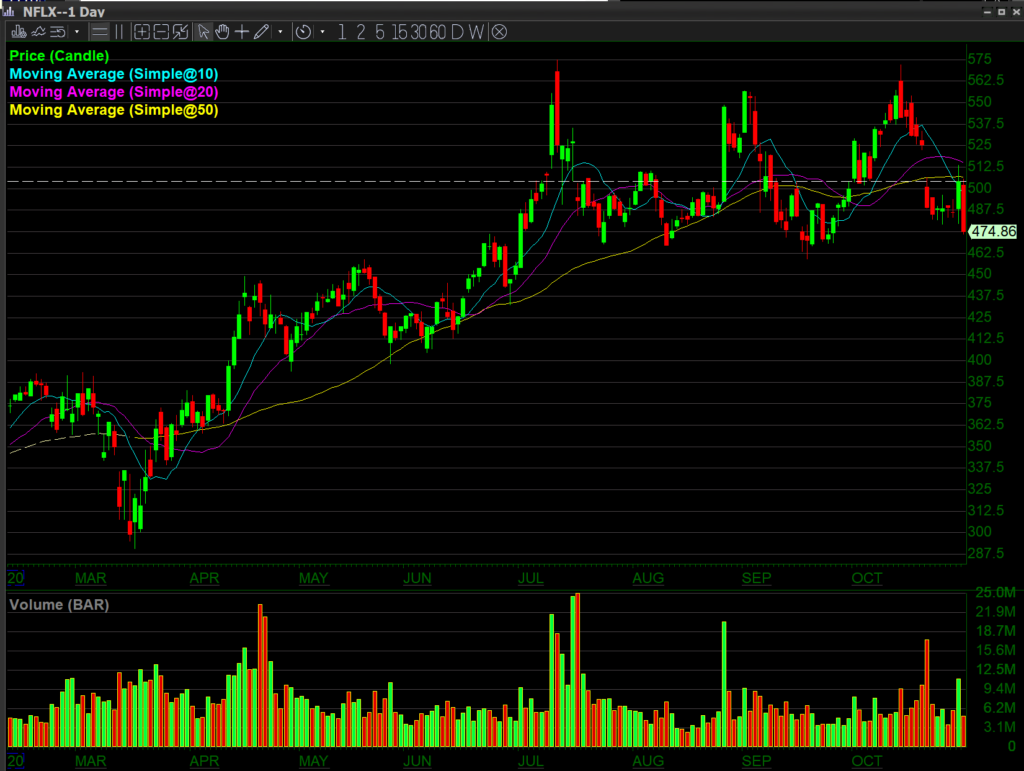 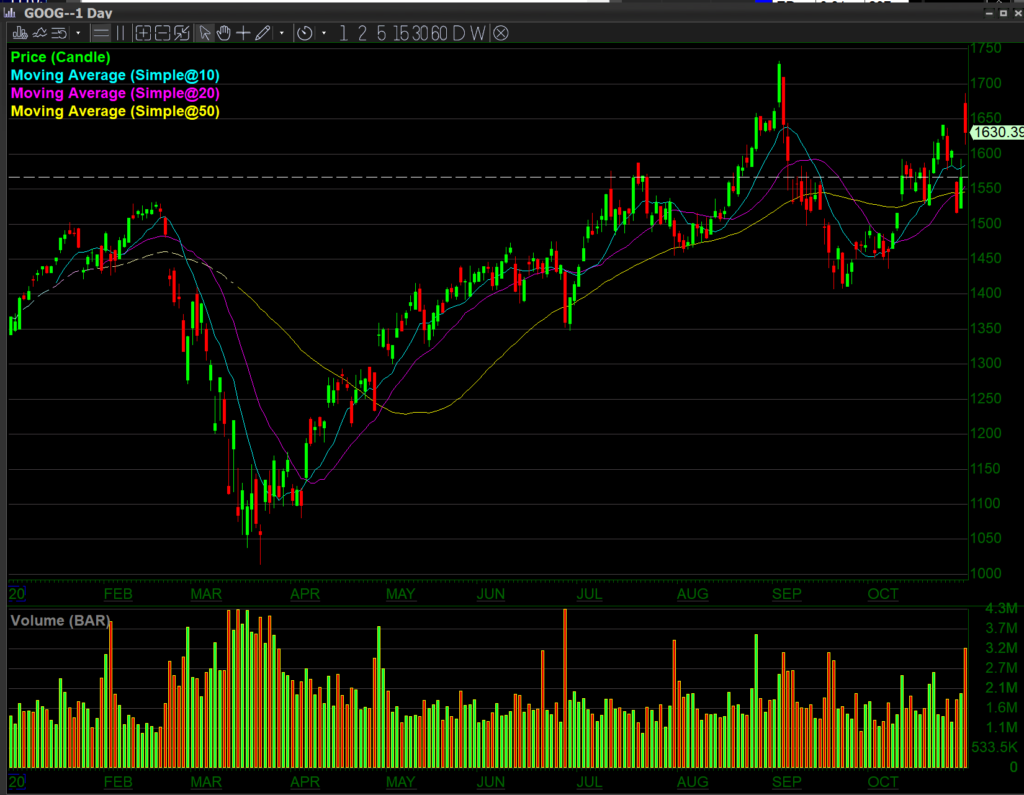 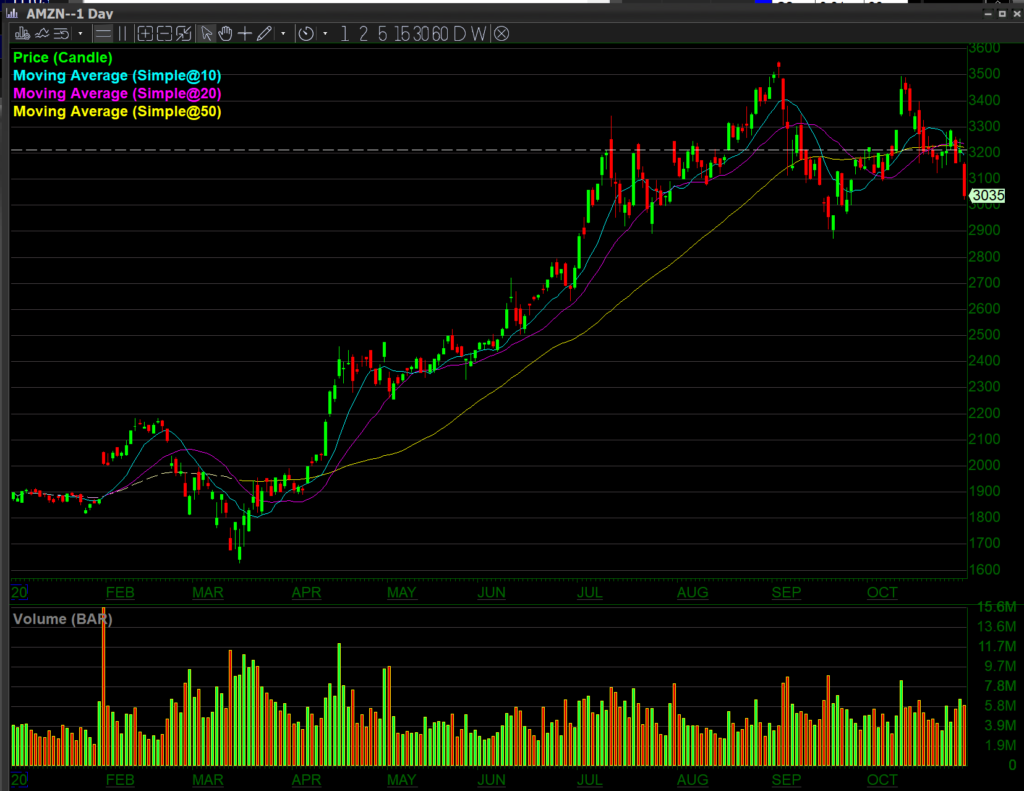 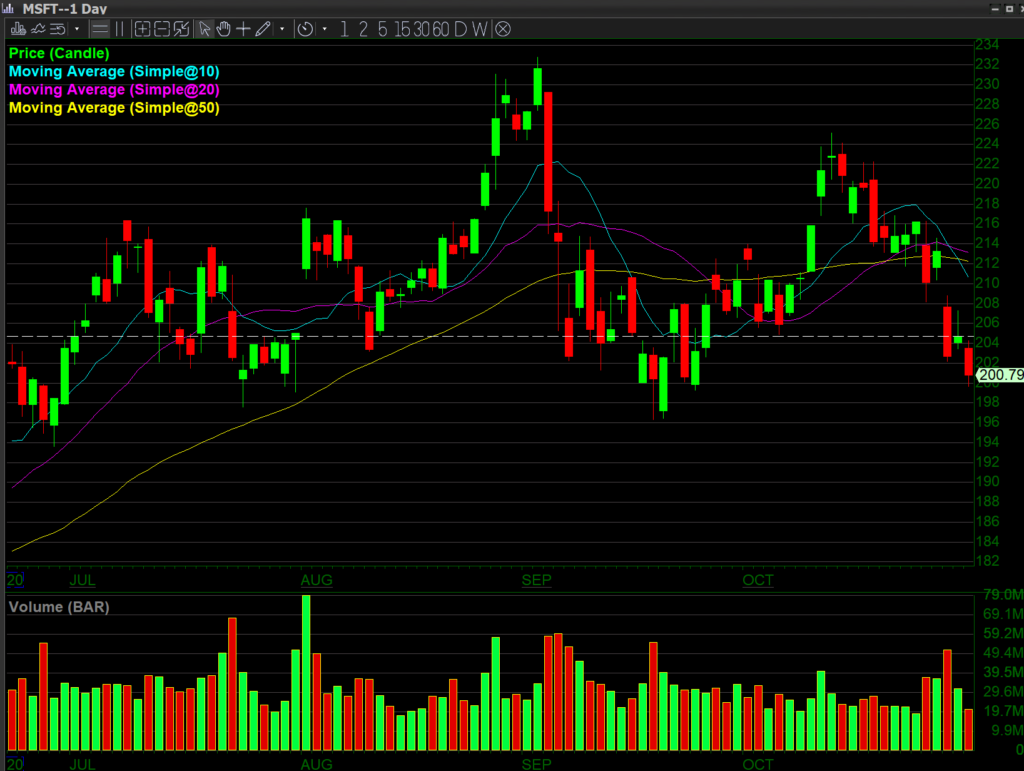 Since the March lows, trading has been the best it has been in years. Many SPAC’s (Special Purpose Acquisition Company) have done well in this frothy market where discounts may soon be abundant. This is usually a very negative sign for the market overall. SPAC’s raise money when times are good, but are expecting value opportunities in the short-term future. This tells us that there are a lot of people on Wall Street expecting things to get far worse as most SPAC’s are still sitting on a pile of cash. Note a few of the most notable SPAC’s and the IPO Date: $FEAC 04/27/2020, $WPF 07/17/2020, $CCIV 09/18/2020, and $PSTH 09/11/2020. 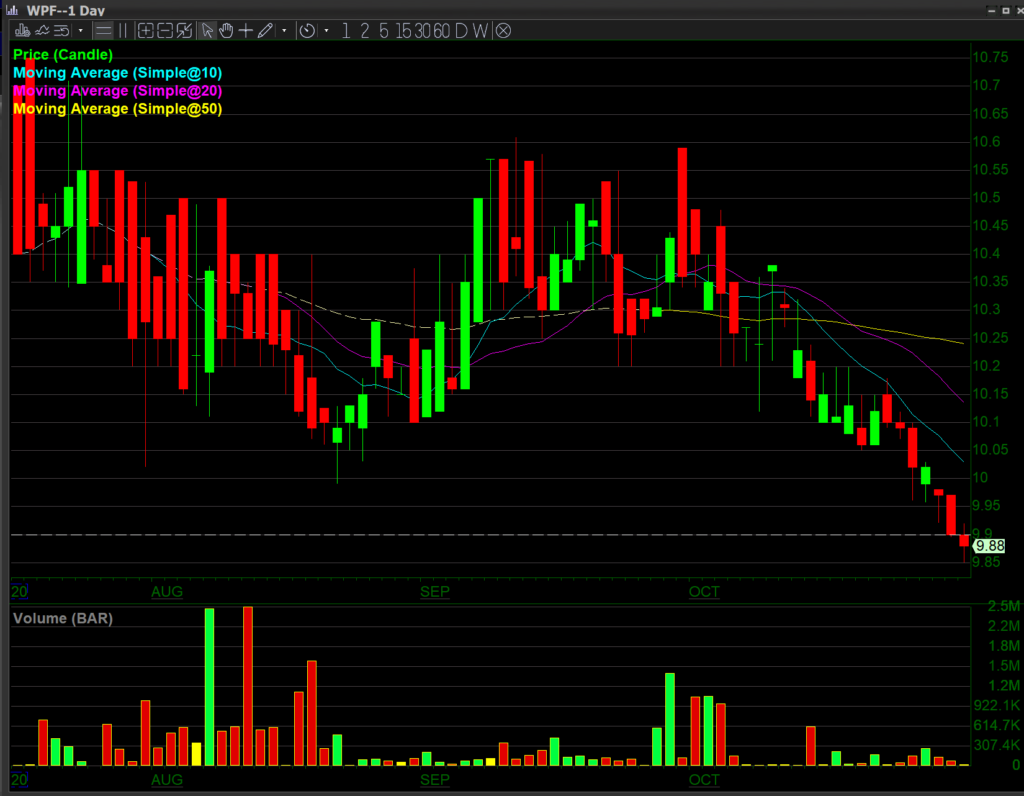 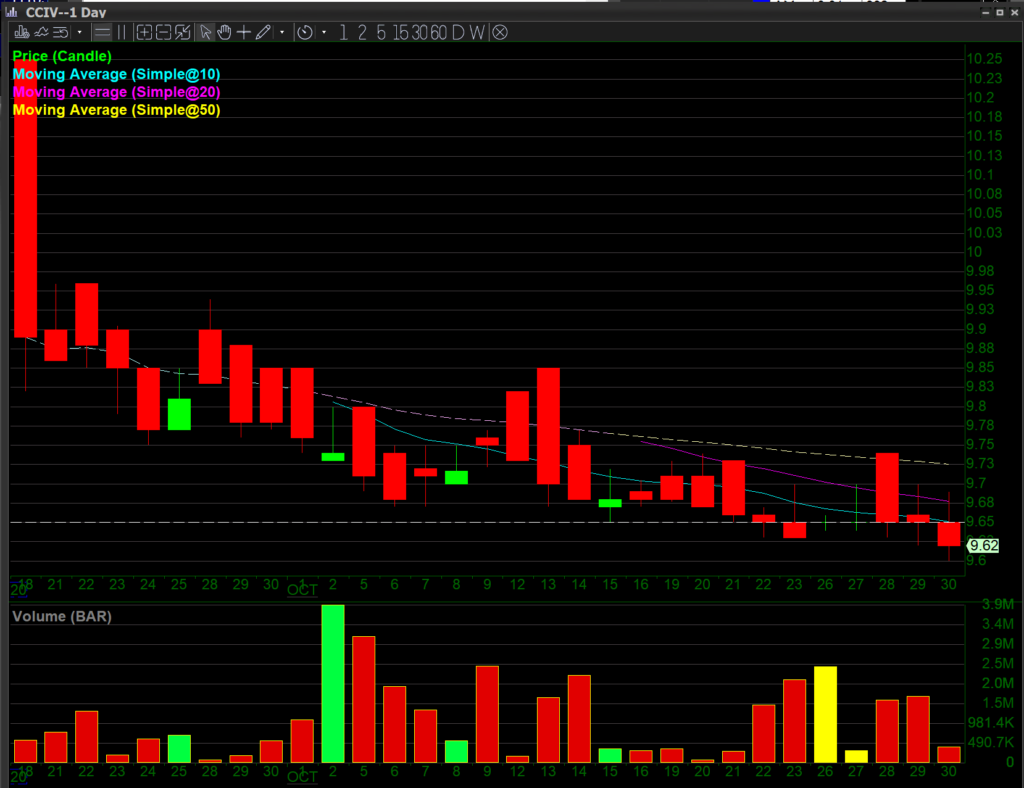 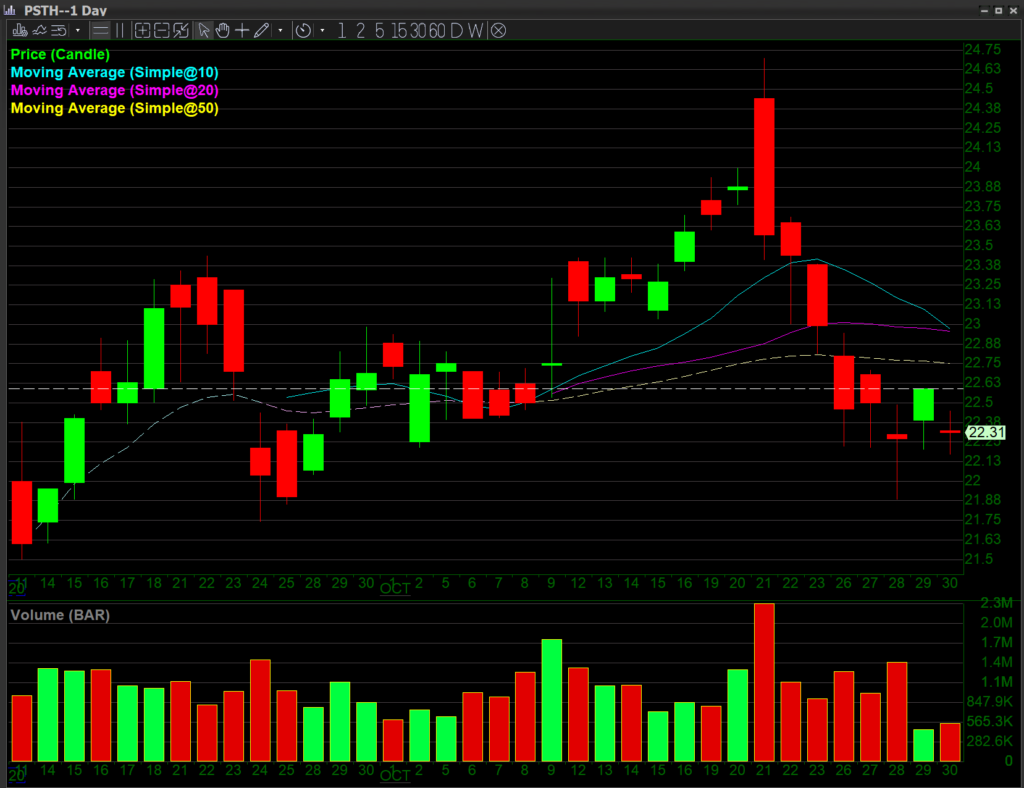 Markets tend to move from bull swings to bear swings. Currently, there is $5 trillion of commercial real estate debt that is starting to show signs of default as small businesses, retail chains and restaurant chains are closing their stores nationwide. Regardless of who wins the U.S. Presidential election, the financial markets seem to be preparing for the worst.

The 3rd quarter GDP numbers were a breath of fresh air. They show signs that the reopened economy had helped the nation bounce back from the economic shut off from the March and April lockdowns. With that being said, the new cases count of COVID-19 are at an all-time high and many indications seem to say that the Fall wave will be worse than the first wave in the Spring. Much is still unknown, but volatility is certainly here to stay which is great for short term and day traders.

We are finally starting to see the market correct. Traditionally, September and October are two of the most bearish months of the year. They precede the Christmas rally (Santa Claus Rally) which starts in November and follows through to January.

It is our belief that the post lock down pandemic stock market rally was largely driven by a loss of value in the U.S. dollar. The amount of stimulus that was given to keep the economy afloat during the first wave of the pandemic was the cause of the weakening of the U.S. dollar. Shutdowns caused by the pandemic forced people to transition from analog to digital means of communication and conducting business.

By comparing the chart of the $QQQ to the $DIA, we can see movement of capital from analog to digital. What we believe is happening now is the reality of the long-term damage to the economy is starting to be realized. People are also coming to the realization that the amount of power and control the tech giants have over the digital realm needs to be better regulated moving forward. We believe that this will have to be addressed by whomever wins the U.S. Presidential election on November 3rd.

Thus far, the big winners have been technology, cloud orientated companies, biotechs, bitcoin and gold. Bitcoin and digital assets have come of age during the pandemic and are now viewed as a viable alternative hedge to the U.S. dollar. We can see this in the chart below. 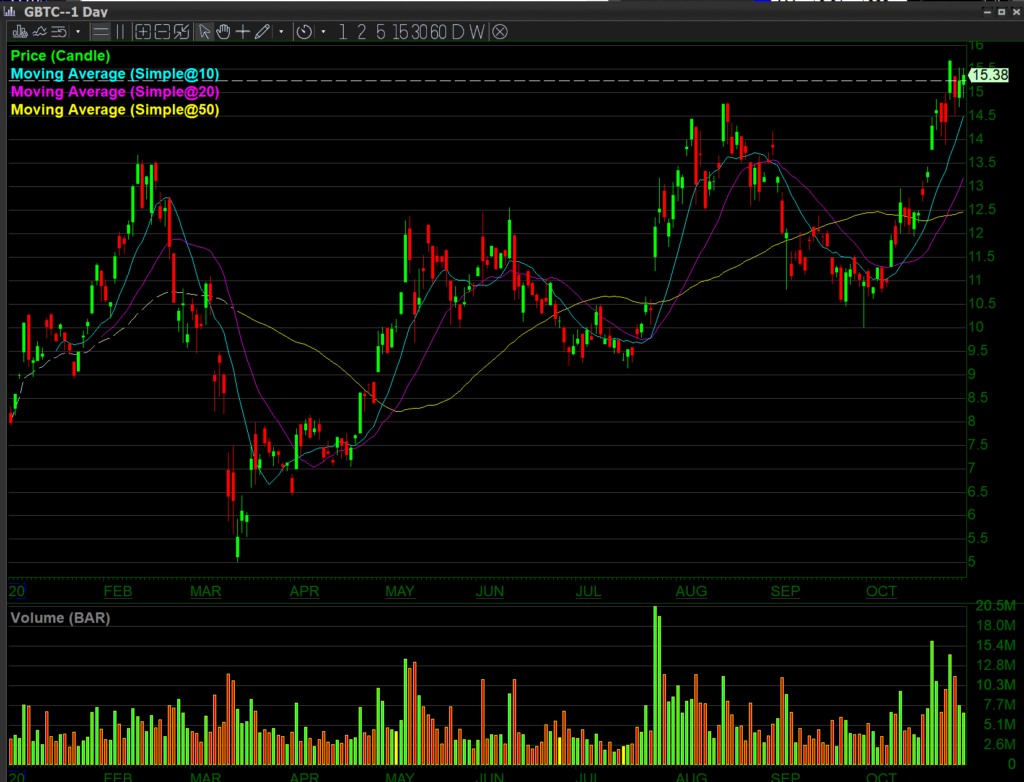 $GBTC is near its highs, and looking to break even higher as dollar weakness, and general acceptance of BTC (Bitrcoin) and other Digital Assets continues to grow. 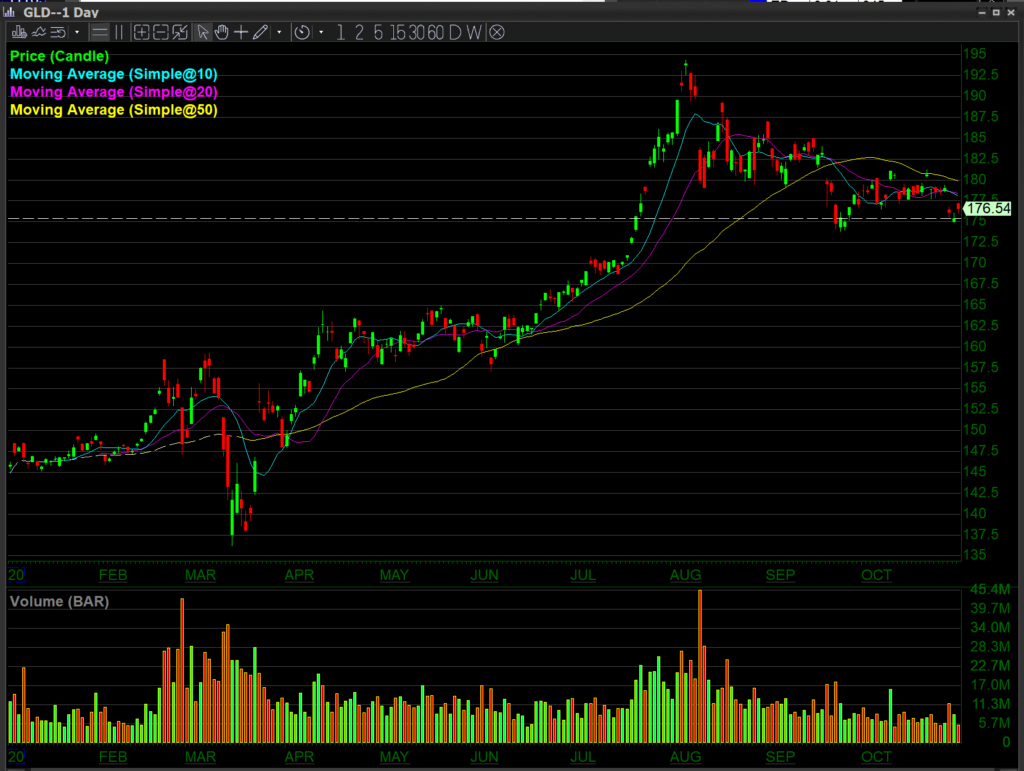 $GLD has also held up well and might break out to the upside even further if the dollar continues to weaken or if there is a contested US election.

This month, we are going to focus on two groups of stocks; companies that will do well if Joe Biden wins the Presidential election and companies that should continue to do well if Donald Trump stays in the White House.

You can expect that if Joe Biden wins the election, he will end the China trade war that will benefit companies like Apple ($AAPL), Nike ($NKE) and others that have large interest in China. You can also expect him to make a move towards renewable energy, so you can see that stocks likes fan and tan which are the ETF tracking stocks for solar $TAN and wind power $FAN have already made a very strong run up.

So if Donald Trump stays in the White House, you can expect defense contractors like Lockheed Martin $LMT and Northrop Grumman $NOC to do well as he continues to strengthen the military for various reasons. Also expect stocks from the gun manufacturers to do well as he supports Americans’ Second Amendment right to bear arms. One noticeable similarity is both $DE (John Deere) and $CAT (Caterpillar) will do well regardless of who wins, as both candidates have promised to help farmers and re-invest in the country’s infrastructure to create jobs.

Not surprisingly, October has proven to be a volatile and brash month. September marked the top of a five month post pandemic rally as the stimulus finally ran out. Without a new stimulus package being passed, the markets effectively ran out of fuel. The surge from the reopening of the economy seems to have brought us back from the brink of collapse, but the realities of the long-term damage to the economy seem to be setting in.

Whomever wins the White House will have their work cut out for them. The outcome that could be worse for the stock markets and for the long-term health of the U.S. economy would be a contested election that lacked a smooth transition of power.

Coronavirus cases seem to be increasing around the country as we get into the Fall and Winter in the northeast and northwest. Schools have begun to reopen and people are forced inside due to inclement weather. The death rate seems to be much lower than in prior months. There are two main reasons for this: 1.) We now have better medical treatment for the virus.  2.) Many new cases are from younger people who often recover without the need of medical attention. There is still no cure or vaccine but treatment seems to have improved greatly. Recently, Mark Meadows, the White House Chief of Staff, stated that we have to learn to live with and manage living with the virus as opposed to controlling it. This seems to be the sentiment of many people in America these days, as many seem to be going about their business while taking precautions and dealing with the virus if they catch it. 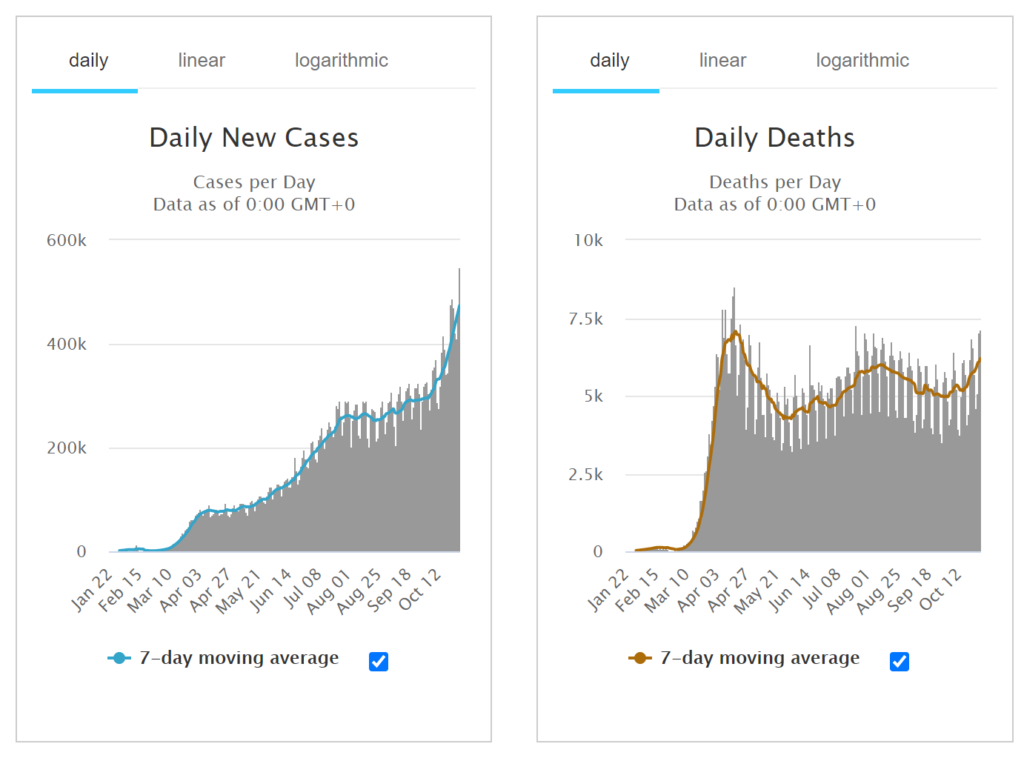 Meanwhile, Ireland was the first country to reintroduce a nationwide lockdown this month. Followed by France and Germany, the United Kingdom has locked down many parts of the country locally as has Spain. Europe was largely praised for its effective control of the virus which, once again, appears to be out of control. These recent lockdowns would lead one to believe that living with the virus while continuing to go about your business seems to be a more logical course of action.

From the perspective of technical analysis, we can see that the markets seem to be rolling over. The major indices that represent the market put in a high and a slightly lower high. Now, many stocks have put in a double top. Those stocks were leading the indices, now their prices are  moving under the moving averages which they have moved from bullish to bearish. From a fundamental perspective, we have finally gotten our long awaited correction. Now, the question on the table is whether we will sink into a recession or worse. Much of this will largely be determined by how smoothly the transition of power goes in the U.S. Presidential election. A smooth transition of power will be the best for the nation and for the economy.

Best of luck to you all. This is not investment advice by any means, but an outlook of things that might be to come. Trade Well and Stay Safe.

Prepare yourselves for our final #1 Best Trader Competition of 2020! Mark your calendars because registration will run from November 22-December 6. The competition will begin December 7th and run through December 18th. You don’t want to miss your opportunity to win some incredible prizes! Visit 1besttrader.com to learn more!