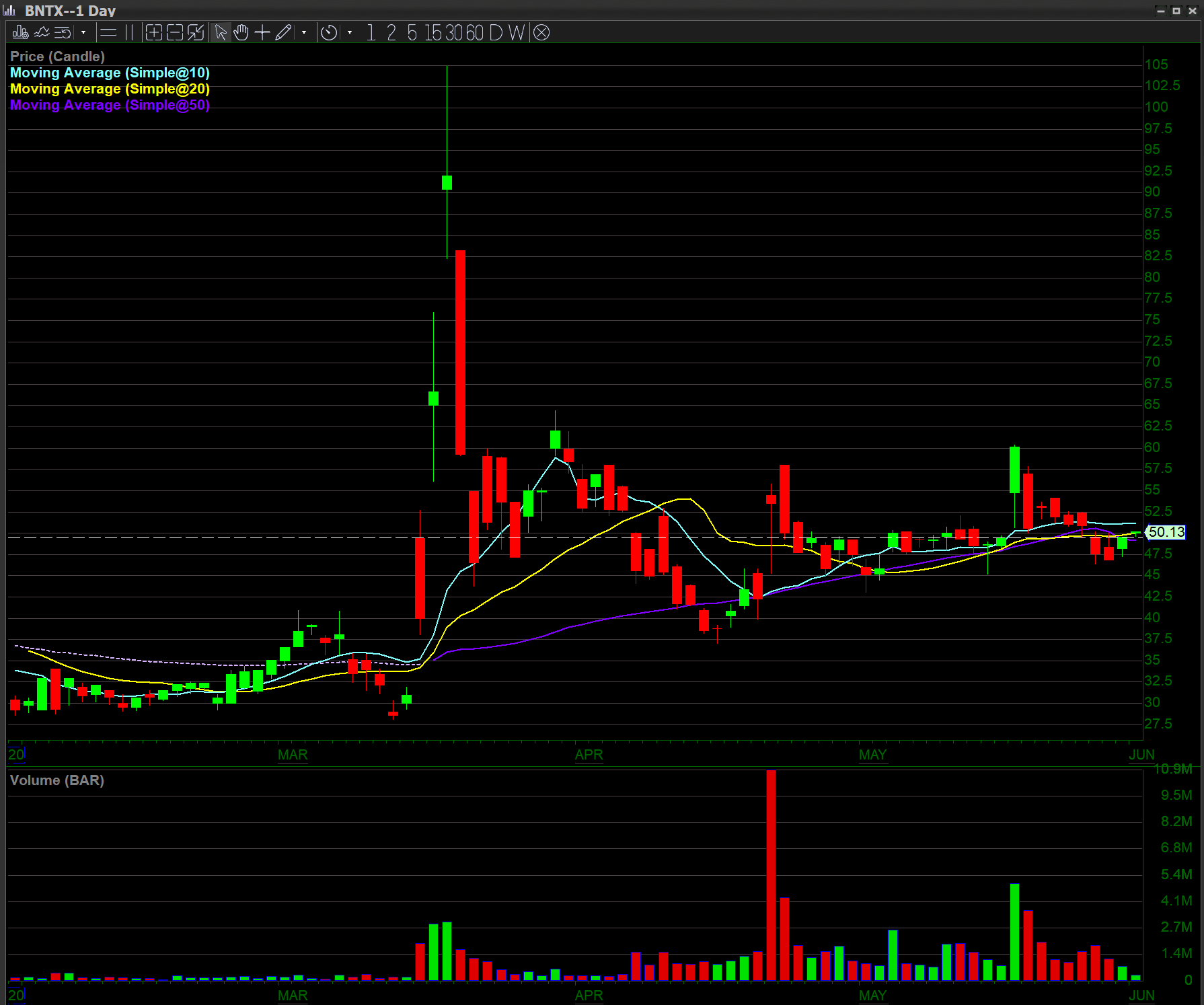 Happy Summer to All,

June Market Outlook
So far, we haven’t seen the “Sell in May and go away” idea come to fruition. Over the last four weeks the market continues to be in a Bullish uptrend despite a choppy, low volume move up into the area of prior highs on the $QQQ.

$QQQ on the weekly chart: 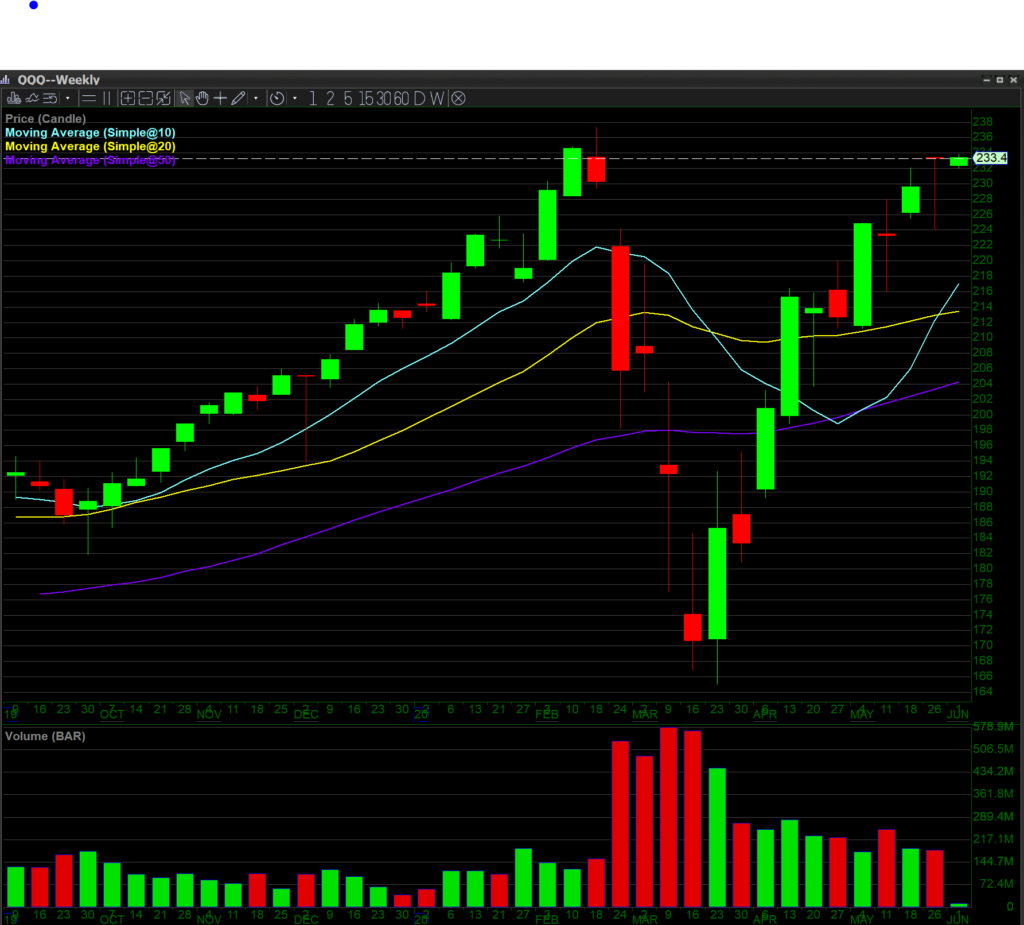 On this chart, we are using the Commodity Channel Index (CCI) which is indicating that the $QQQ might be overbought.

While the $SPY and $DIA have not been as strong, they have retraced over 50% of the move down. Fundamental analysis often takes a long time to catch up with the technicals and the news,but the hard reality of the fundamentals usually catches up to the markets bringing it back to its senses. This has clearly not happened yet, as unemployment has reached all time highs of 40 million Americans are out of work or 25% unemployment. 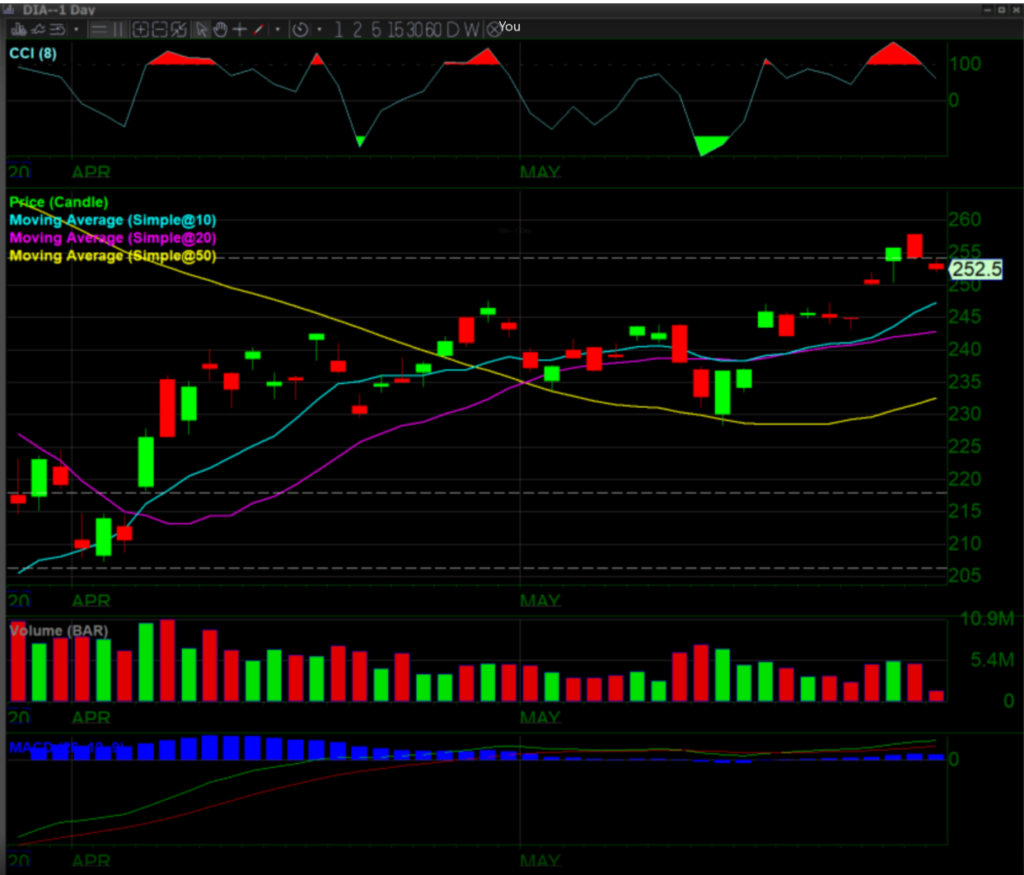 $DIA is also showing that the CCI might be deeply overbought.

Important Note – The charts shown here are from the DAS TraderPro Platform and displays three Moving Averages(10, 20 and 50 period SMA), the CCI (Commodity Channel Index) which displays overbought and oversold readings and the MACD (Moving Average Convergence and Divergence). You can find a video on how to configure your DAS Trader Pro Charts at https://www.youtube.com/watch?v=R-DgWfqUpyE. 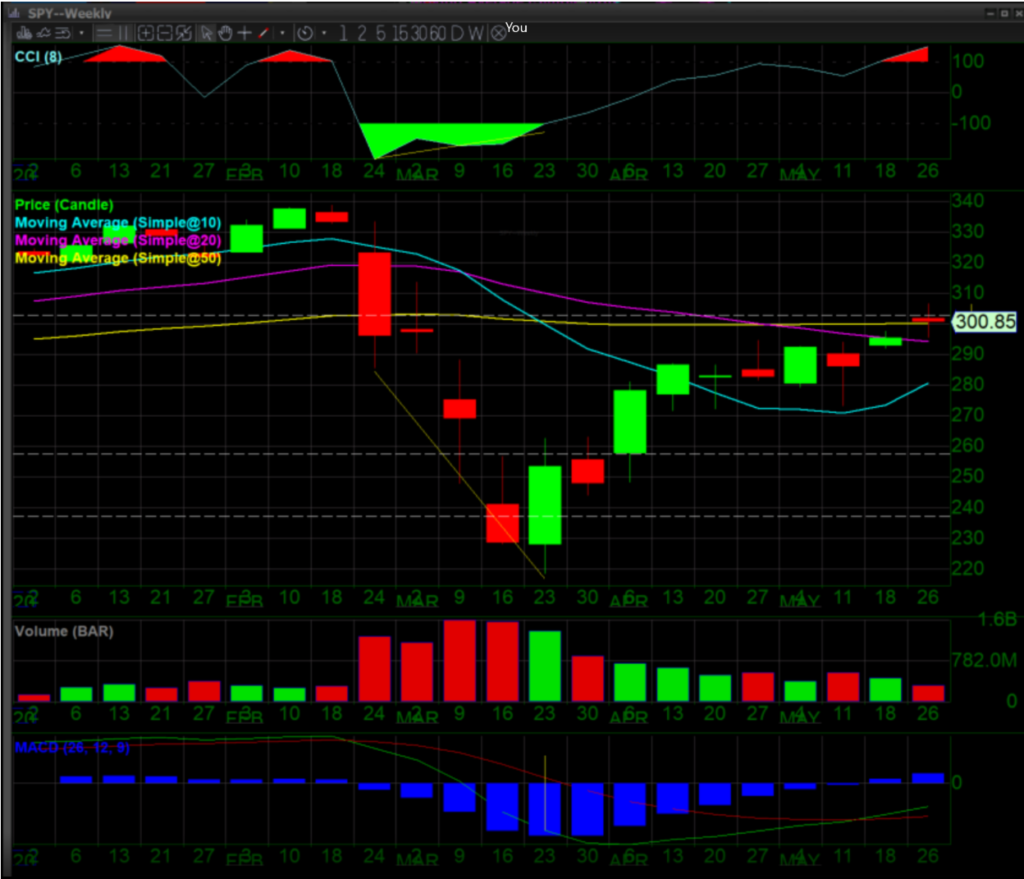 After an almost 30-36% move down from the highs, the $SPY has bounced 75% off the lows. The $QQQ has retouched the highs and the $DIA briefly popped over the 25,000 level. The bear flag formation that seemed to be forming, retraced to a new high and looks more like a double top on the $QQQ or a lower high on the $SPY (the S&P even went above the 3,000 again) and $DIA. Currently, we are on the upper end of this low volume swing up, and we are potentially setting up for another rotation to the downside.

Gold continues to move higher as a flight to safety continues. The US, Federal Reserve and the European Central Bank (ECB) continue to print money by way of new debt with wanton abandon. Thus, another ETF to keep an eye on is $GLD which is a gold ETF (Electronic Traded Fund). $BTC has had its halving which has caused it to drop slightly.

$GLD about to break out to the upside, in a strong weekly uptrend with every signal indicating moving higher. 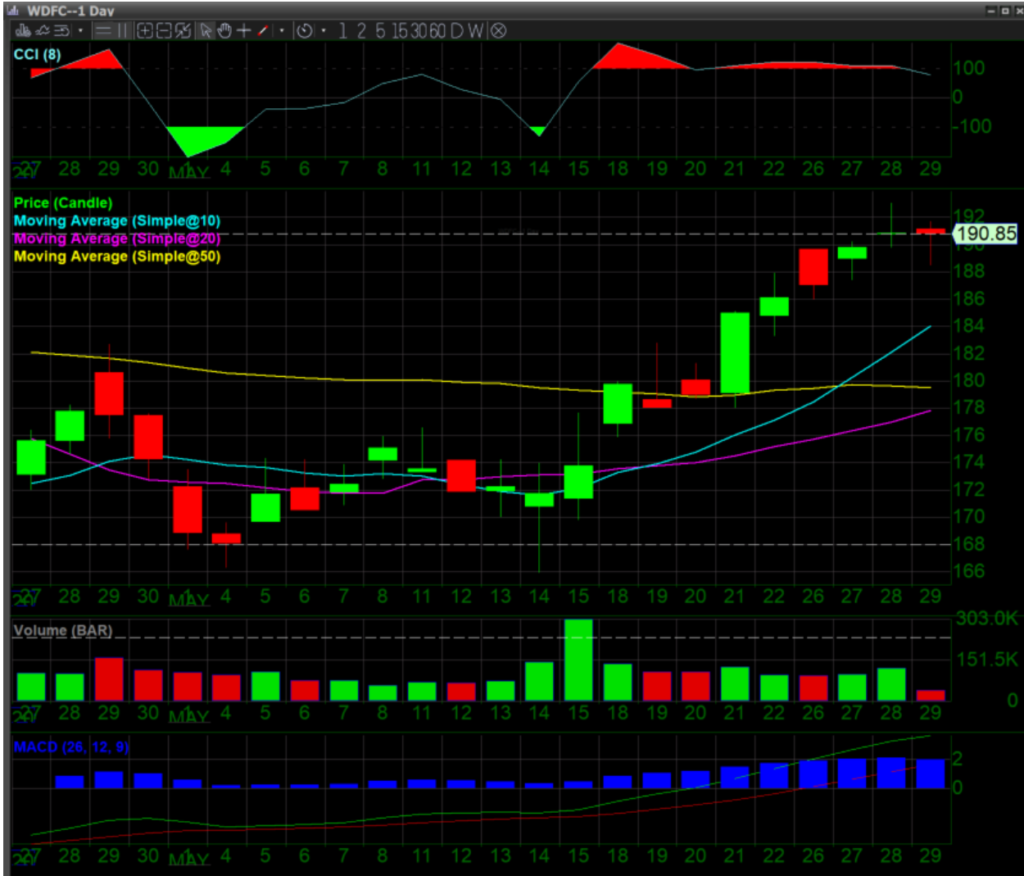 $FLO (Flowers Food, Inc) also made a nice move higher, but relative to the markets, it was not a big mover.However, this play may still have an upside as it has not yet broken out and it is still a defensive play. That could breakout if the reopening does not go well or if the virus numbers start to surge again. 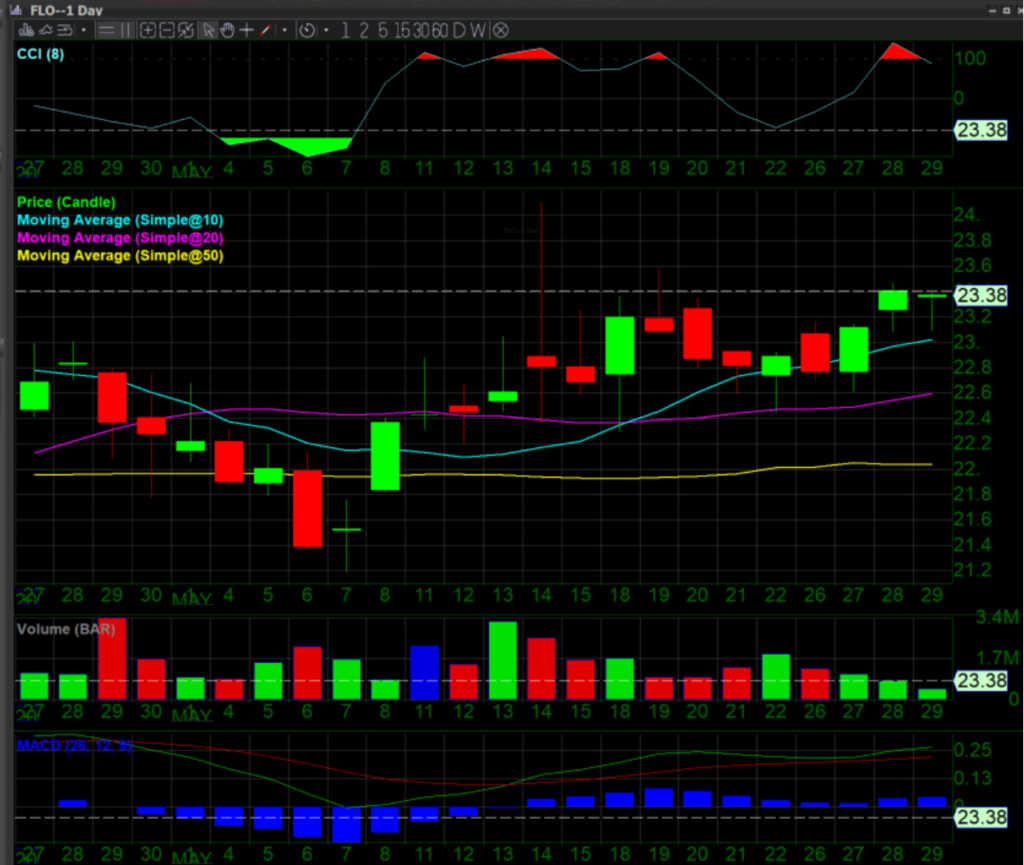 $VIRT (Virtu Financials Inc) still shows upside, currently at $23.36 it still has upside potential to $25.85. It is still a defense play that will do well as market volatility increases. 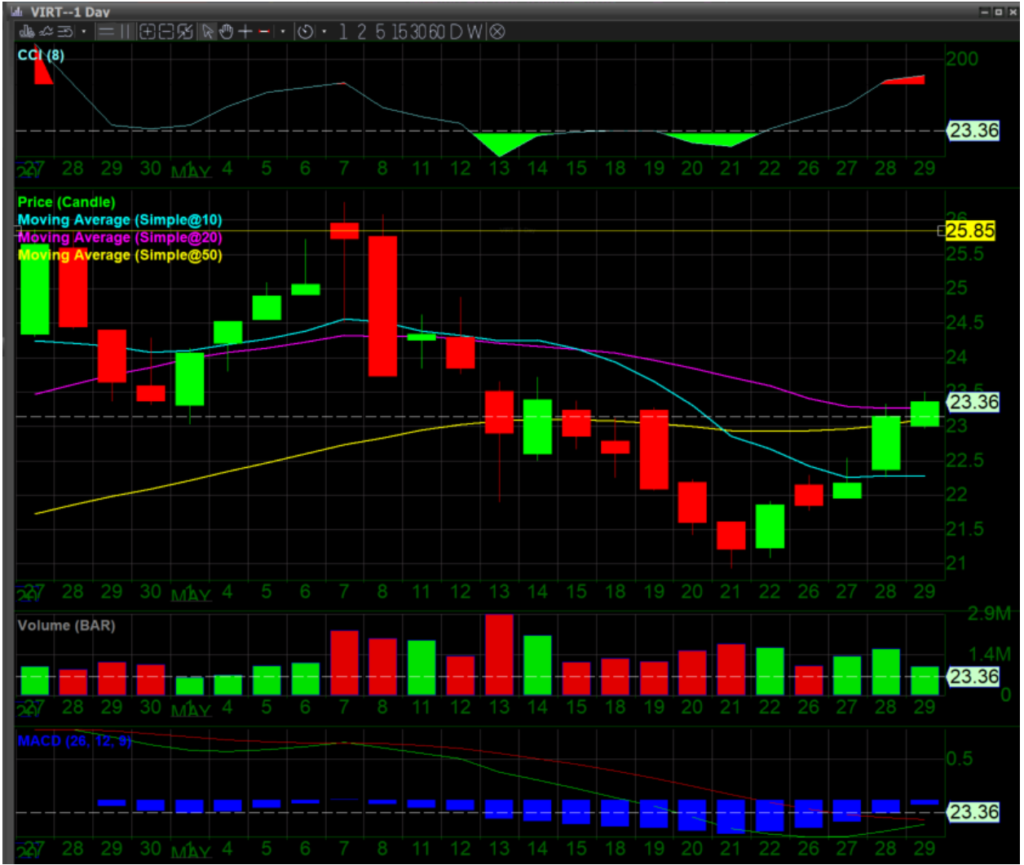 Some Stocks that might see a move to the upside are $VSTO (Vista Outdoor) and $RGR (Sturm, Ruger & Company, Inc); consider keeping an eye on those.

We will continue to lean in the direction of caution; you should sit on your hands when things do not make sense. In times of uncertainty, watch the $VXX which measures volatility in the markets.

Remember, markets very rarely bottom; they often double top and base before a true reversal or resumption of a trend.

As expected, the country has started to reopen regardless of numbers and statistics. People seem to have made their decision to live their lives and get back to a more normal way of life. As the reopening has just started to happen in many places this past week, we have yet to see the real result of the reopening on the numbers of new cases. We will see, considering the virus often takes 1 or 2 weeks to start to take hold in the form of new cases.

Europe has largely reopened, with the exceptions of bars, nightclubs, and gatherings over 50 people. Social distancing is the order of the day.

$BNTX is a less known BioTech company that might beat out $MRNA (Moderna, Inc) at its own game in developing a vaccine. 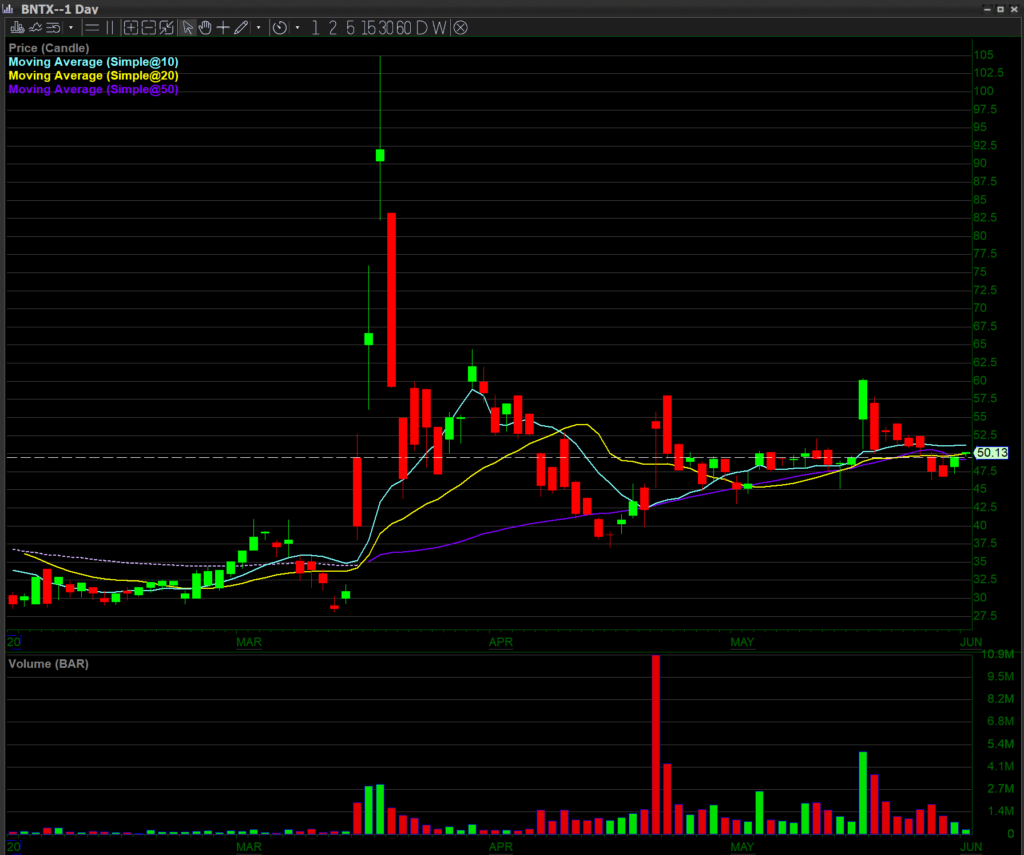 We should all monitor these two stocks and watch how the vaccine development process continues.

From a more global perspective, we have seen Brazil, Mexico, and India start to see a drastic increase in new cases. Brazil has locked down its borders for a month as it is now the center of the pandemic worldwide (only trailing the USA in projected death figures). The stark reality is that Brazil’s numbers are more like 10x the numbers being reported, as the medical system is near collapse and testing has been very limited while the graveyards are quickly filling up.

Things rarely happen the way you expect them to. The world markets sold off rapidly at the onset of this pandemic, and seem to have recovered just as quickly since then. The reality is that even though no selloff has come, we are clearly not out of the woods. The first quarter was not terrible and the second quarter seems to have already been written off. The structural damage to the economy has truly not been calculated yet. The next waiver is to see what happens as the temporary protection from emergency measures start to wear out.

Best of luck to you all. This is not investment advice by any means, just an outlook of things that might be to come. Trade Well, Stay Safe.

Due to COVID-19, we had to make a slight change to our prize offerings. You can review them here: https://1besttrader.com/#Prizes however, we are going to offer a unique ‘Virtual Luncheon’ prize where the winners will get to eat lunch and speak directly with a renowned trader through Zoom as well as a rain check on the Wall Street Tour. We are really excited about this competition, and we hope to see you there!

Happy Summer from your friends at DASTrader.com!