Gauging how a political event like the U.S. midterm elections can affect the U.S. equity markets can be unpredictable. One thing is for certain, volatility is caused by uncertainty. As the midterm election grows nearer, in many places early voting has already started, you will begin to see the financial markets start to factor in what the expected outcome will be. The full impact will not be felt until the results are confirmed, but this blog is intended to provide some insight as to how things are developing. Currently most polls are indicating that Republican and Conservative candidates are favored to win the U.S. House of Representatives and Senate

The controversial issues that have favored the Republicans this election season have been fighting back against crime (especially in places like New York, LA, Chicago, Portland, and San Francisco) and immigration policies (in places like Texas and Arizona). Some issues have been nationwide such as fiscal overspending by the government and continued inflation. Other issues that have favored the Democrats have been abortion rights and gun control.

The pendulum of politics swings back and forth after two years of excessive public spending due to the pandemic that seems to have caused unprecedented inflation. The political environment seems to have turned against loose fiscal policy and the Federal Reserve Committee is tightening up monetary policy. Traders and investors must determine how this will affect the financial markets and investments so that they can trade these turbulent markets profitably. If the Republicans win the House and the Senate you can most assuredly expect less government spending. Less government spending will further strengthen the U.S. dollar as the government will cut back on spending. As the dollar strengthens U.S. stocks listed on (US) markets which are denominated in dollars will have to go down in price. As the dollar appreciates, the listing value of the companies will likely stay the same or, iif their revenue is international, they will be worth less. 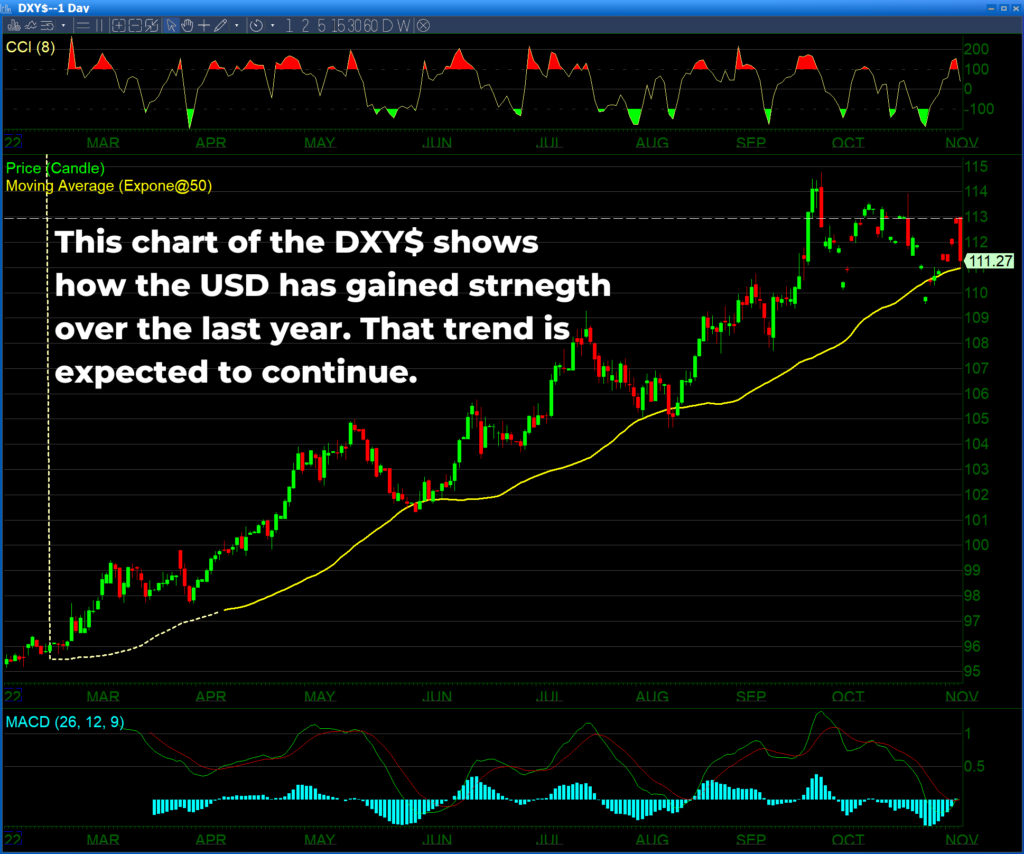 An added factor to this is the strength of the U.S. dollar versus the British pound. The British pound has been beaten up more than most currencies because of the individual problems related to Britain’s own financial crisis. This is a crisis of confidence caused first by Britain leaving the European Union, and made worse by bad fiscal decisions by the previous British Prime Minister. More specifically giving a large tax cut when the country was already deficit spending. There is also an energy crisis in the UK mostly caused by the war in Ukraine.

The U.S. dollar also stands to benefit from the precarious energy situation faced by Germany, which is the anchor state and financial powerhouse of the European Union. This has allowed the USD to strengthen versus the Euro. Japan’s Yen has also dropped to a multi-decade low versus the USD. Japan has an export driven economy and when the world’s economy starts to slow it has a dramatic effect on the value of the Japanese yen.

If the U.S. Republican party wins the majority in both the House of Representatives and the Senate you can most assuredly expect more protectionist policies out of the United States, as well as more fiscal conservatism. This will only add fuel to the already skyrocketing USD (see the chart of the $DXY above). 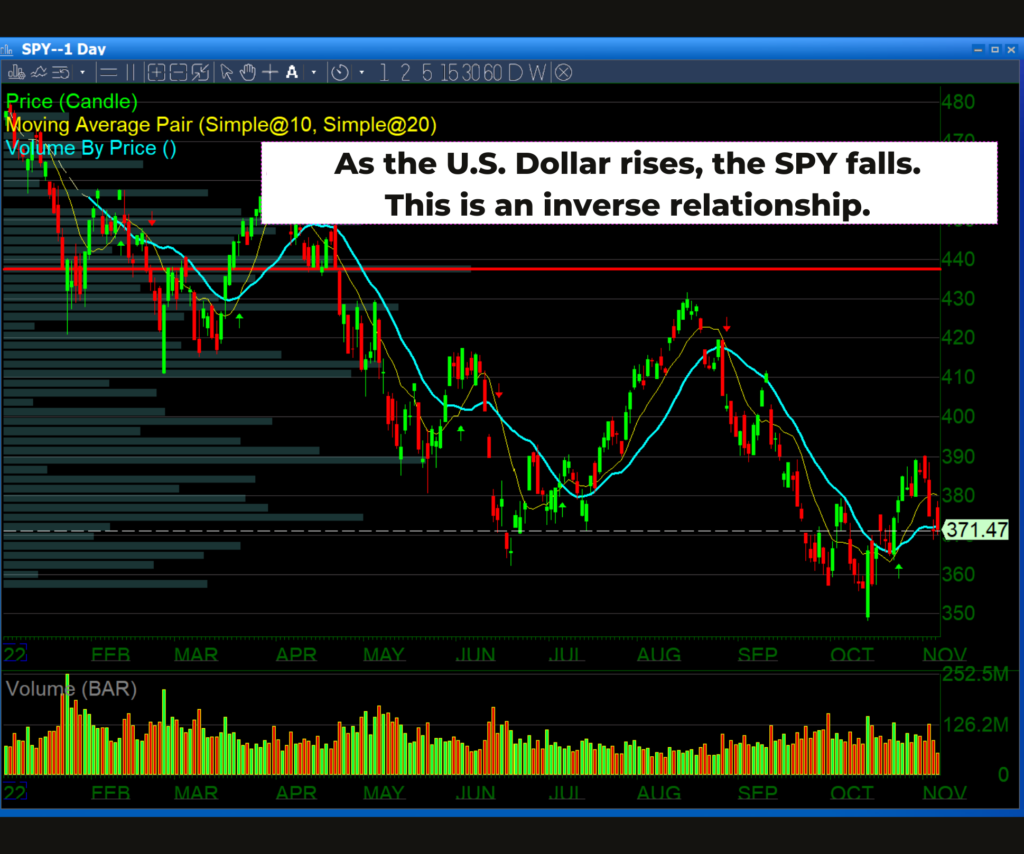 Other asset classes such as oil and other hard commodities are denominated in the USD. As the USD continues to rise these commodities will generally drop in price for two reasons. 1)  a drop in demand worldwide and 2) the USD value is increasing and they are priced in dollars yet their value is most likely staying the same or going down slightly due to the drop in demand.

The one thing that often does not drop during an inflationary period as a result of an increase in the value of the USD is the price of food. The reason for this is simple: demand does not drop for food consumption. In fact we are still dealing with a massive drop in supply caused by the Russian/Ukraine war alongside the interruption in the supply of fertilizer for this year‘s growing season. Unfortunately, regardless of what the government intends to do against inflation for the short term, the price of food and other perishable commodities will likely continue to increase even as the dollar’s value increases. Maybe this increase will be felt less in the United States where we use the dollar, but the increase in inflation for food prices will be felt twice as strong in countries that are also seeing their currency depreciate.

Gold, silver, and precious commodities were the currency prior to the USD standard. They are going into the holiday seasonal trend as they are often given as gifts in the form of gold and silver. This is not just a Christmas and Passover holiday in the U.S. and Europe, but it is also the Chinese New Year and the Spring festivals in India. It’s likely we will not see a significant drop in the value of gold and silver at this time. We will probably see them appreciate slightly versus the USD, but when the dollar does start to drop the value of gold and silver should drastically increase. From a long-term perspective, gold and silver tend to be an area of safety during a period of dollar appreciation.

A Republican victory in the midterm elections would lead to a boom in the oil and gas industry, as well as any company that was part of the old economy listed on the Dow Jones industrial average. Technology, which relies heavily on low interest rates, would probably be most negatively affected and the new media has been perceived as supporting the Democrats. Over 9000 permits have been held up in the United States for environmental policy. It is likely these permits will be approved if Republicans once again take control of the House and Senate. Dependency on fire and oil has been a controversial issue over the last two years. It would likely further reduce the price of oil and gas by two factors, 1) fiscal conservatism would strengthen the value of the USD and 2) oil and gas would have an increase in supply or a perceived future increase in supply as more refineries and permits are resumed.

These are all speculative thoughts based on the assumption that the polls are correct and the Republicans take back both the House and the Senate. The facts are that the Senate race will be very close and either side could pull off a victory. The most prudent thing traders and investors can do when a large volatility event is looming in the near future is to stick to short-term trading and to be exceptionally cautious. Trade well!