In this blog, we’re going to discuss the chances as well as the depth of the expected recession in 2023, but before we go too far we need to first revisit the definition of a recession.

What is a Recession?

– In 1974, economist Julius Shiskin came up with a few rules of thumb to define a recession: The most popular was two consecutive quarters of declining GDP. A healthy economy expands over time, so two quarters in a row of contracting output suggests there are serious underlying problems, according to Shiskin. This definition of a recession became a common standard over the years.

– The National Bureau of Economic Research (NBER) is generally recognized as the authority that defines the starting and ending dates of U.S. recessions. NBER has its own definition of what constitutes a recession, namely “a significant decline in economic activity spread across the economy, lasting more than a few months, normally visible in real GDP, real income, employment, industrial production, and wholesale-retail sales.”

Why are these definitions important?

Are we currently in a Recession?

According to these definitions, we have been in a recession since the second quarter of 2022. But this is not a single occurrence, this would be called a double dip recession as we also entered into a recession during 2021 and briefly into a recession in 2020 (depending on which definition of recession you go by).

As you can see here in the chart provided above, the U.S. GDP was growing quarter after quarter up until the start of the pandemic in Q1 2020. Once the pandemic started, U.S. GDP growth started to decline rapidly and actually did decline for three out of four quarters in 2021. After a brief spike at the start of 2022, U.S. GDP has declined pretty much every quarter in 2022 putting us back into recession by the third quarter of 2022.

There was some discussion in the middle of this year that the definition for recession had changed. The main reason for this perceived change in the definition of recession was a post made by the White House, which is provided below. The two-out-of-four-quarters of economic decline did not by itself constitute a recession, and that a decline in overall economic activity which is not quite so specific also needed to reinforce the decline in gross domestic product of the nation. 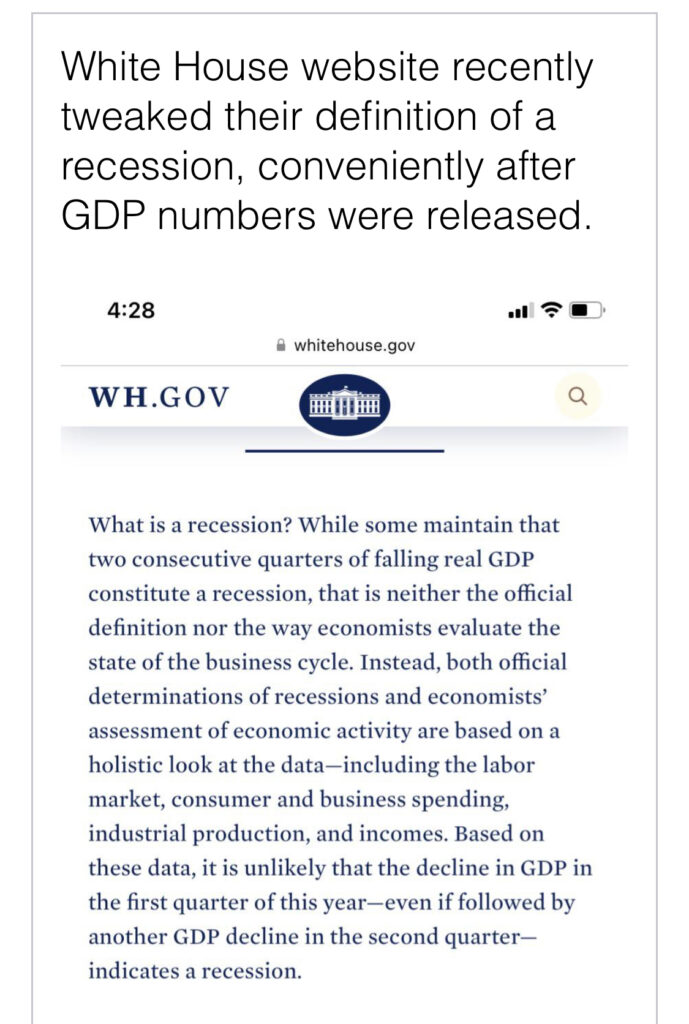 At this point, as 2022 comes to an end, very few would argue that we are not seeing a reduction in economic activity across the board. As interest rates continue to rise and inflation continues to rage higher, we are entering into a period of stagflation. The likes of which this nation has not experienced since the 1970s. And now a host of other economic leaders are adding to the chorus who say that a recession is coming, while some continue to say we are already in a recession.

At this point it really is a moot question as to whether we are in a recession already or if there is one just beyond the horizon. For many, it already feels like a recession, as we have seen the start of layoffs and we have seen companies tightening their belts as revenues decrease.

The chart above is of economic growth that was expected for 2021 and 2022. The shaded bars indicate prospective growth. Certainly, the rebound that was expected did not come as real GDP growth never materialized.

The chart above also shows that the first 2 quarters of 2022 had negative GDP growth. Although the jury is still out for 2022 overall, early estimates will show that the economy most likely contracted in 2022. Consensus no longer argues over whether or not there will be a recession. The following Yahoo Finance article states “there will be a 70% chance of recession in 2023”. However, I would argue that according to the original definition, we already entered into recessionary times midway through 2022. Most data lags a little bit, so it is not uncommon for the officials to come out after the fact in proclaiming when the actual recession started. Just like it was obvious to most that inflation would not be transitory, even when many of the officials continue to insist that it would be. It appears as though we are most likely in a recession. The question now seems to be how deep and long that recession will last.

Why is there a disconnect between reality and what the officials are telling us?

Data does lag, that is a fact. So often it takes time to collect data, compile the data and then publish the data for these official sources. Meaning that the Federal Reserve needs to go off of officially bonafide data sources. But with that being said, there are many sources of real-time data already indicating that we are well into a recession. That brings us to the next issue which is the political motivations behind labeling something a recession, as well as possible political motivations pushing the Federal Reserve to act contrary to its charter which calls for it to be independent of politics.

How deep will the Recession be?

Based on all that we’ve analyzed so far, it appears that we may be in a recession already, or there is a 70% chance or greater that there will be a recession starting in 2023. Determining the depth of that recession is then based on how the Federal Reserve reacts to it, and how prepared the U.S. federal government is to react to worsening conditions as the recession starts to grow deeper and more prolonged. Let history be our guide. This analysis is based on Paul Volcker‘s experiences in the 1980s in battling high inflation. If the Federal Reserve continues to raise interest rates and quickly get inflation under control, the recession will probably be short-lived. Meaning that if the economy is allowed to correct once inflation has been brought under control, then the economic pullback should be no longer than a few quarters if not one year at most. If the Federal Reserve continues to act in a Dovish manner, as frankly it has done in the past, and bows to political forces, and it tries to soften the recession by not raising interest rates sharply in order to get inflation under control, the recession will not be quite as deep but it will be more drawn out. Think of it like putting a Band-Aid on the economy; once the wound is healed you can either pull the Band-Aid off sharply or you could peel it off slowly. The Federal Reserve is already applying the Band-Aid; the economy has yet to heal but in time, it will heal as long as the monetary and fiscal policy remedy is applied. The depth of the recession will be based on how strictly the Federal Reserve sticks to applying the remedy of monetary policy, which is to increase interest rates until the economy and inflation is cooled off (i.e. the recession). The U.S. federal government must also cut back on spending in order to apply the fiscal policy remedy. Politically, this is very difficult medicine to apply, but if done properly, the recession will pass within 12 to 18 months. If either the U.S. federal government, or the Federal Reserve deviate from this course, the recession will grow deeper and more pronounced. If history is to be our guide, then we have already learned “You cannot spend or price fix  your way out of a recession and inflation.” Fixing prices does not help fight inflation; Nixon and Carter tried this and Failed. Recently the European Union applied a price fix to the cost of natural gas, so clearly some policy makers have not learned this lesson yet. It was only the combination of Ronald Reagan and Former Fed President Paul Volker that ended the Stagflation of the 1970s and put the U.S. economy back on course of economic growth during the 1980s.

In the next blog we will return to our previously promised lesson on doubling down in trading. Happy holidays and Happy New Years to all.