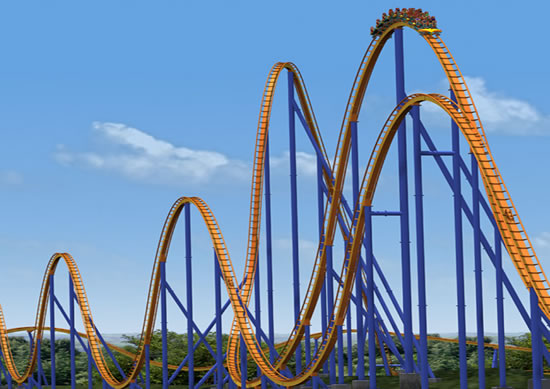 November has been a rollercoaster of a month. It has gone from being about to break the lows just before the election, to blasting off to fresh new highs. The $DJI (Dow Jones Industrial Average) has broken the major psychological level of 30,000. This is largely due to a locked Congress, regardless of the uncertain election results. There seems to be good news out of the three pharma giants in that all of their vaccines range between 90%-94% effective; $PFE (Pfizer), $MRNA (Moderna) and $AZN (AstraZeneca). Even though COVID-19 continues to rage around the world, it is expected that with the three, at least 2 will be highly effective vaccines. And this light at the end of the tunnel is certainly a much needed positive for the end of the year. There is hope that by the third quarter of 2021, most of the world will have access to the vaccine.

As we have said before, the financial markets seem to be immune to what is happening around the world and are playing to a different drum beat. The prime mover of the financial markets should be earnings, or future earnings, but instead it is the news of a stalemate Congress and vaccines that seem to be moving the markets. Since this is our current reality, let’s take a look at the reason why Wall Street has rallied on a stalemated Congress. The more radical parts of the Democratic Party will not be able to push through less business friendly policies if the Republicans still control the Senate. This gives the more moderate Democrats leverage to continue to work with the Republicans. 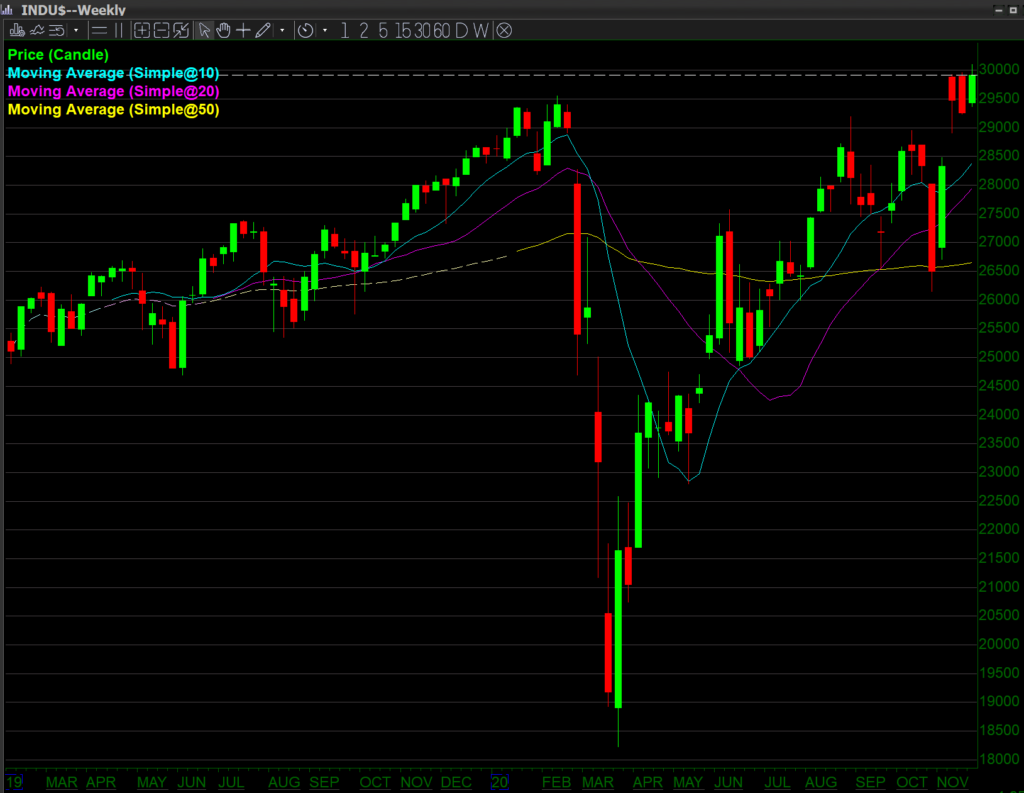 The DOW JONES INDUSTRIALS broke the pre-pandemic high as well as the huge psychological milestone of 30,000. 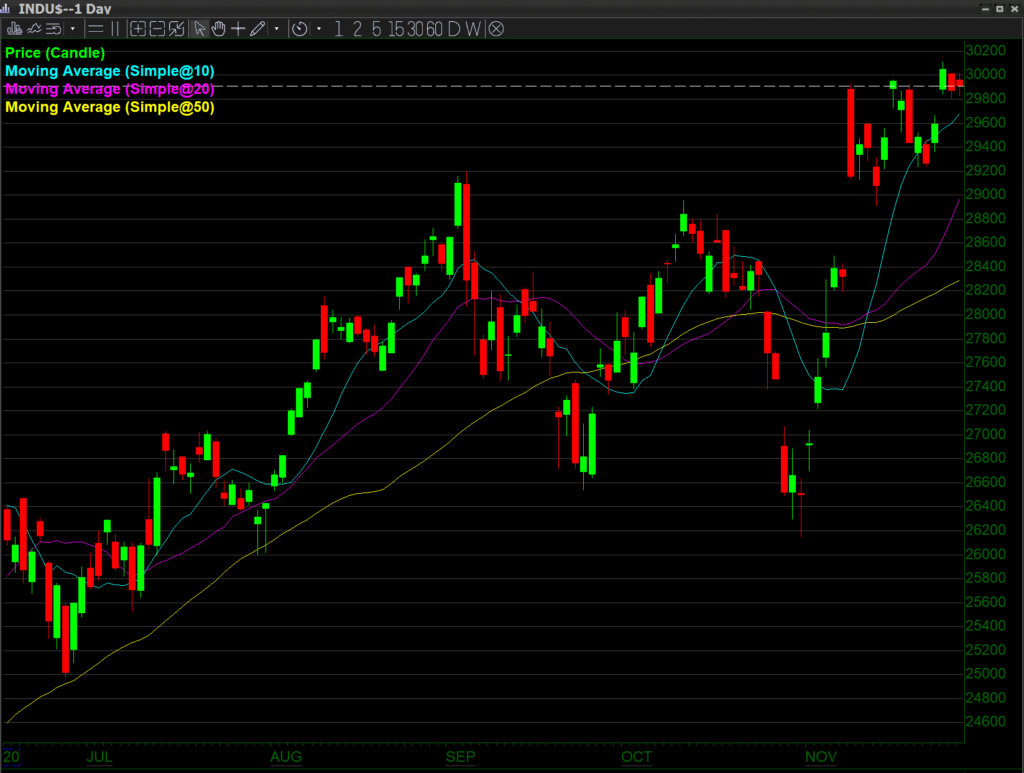 The question is, do we keep climbing higher like the beginning of a roller coaster or are we ready for the new thrilling move to the down side? 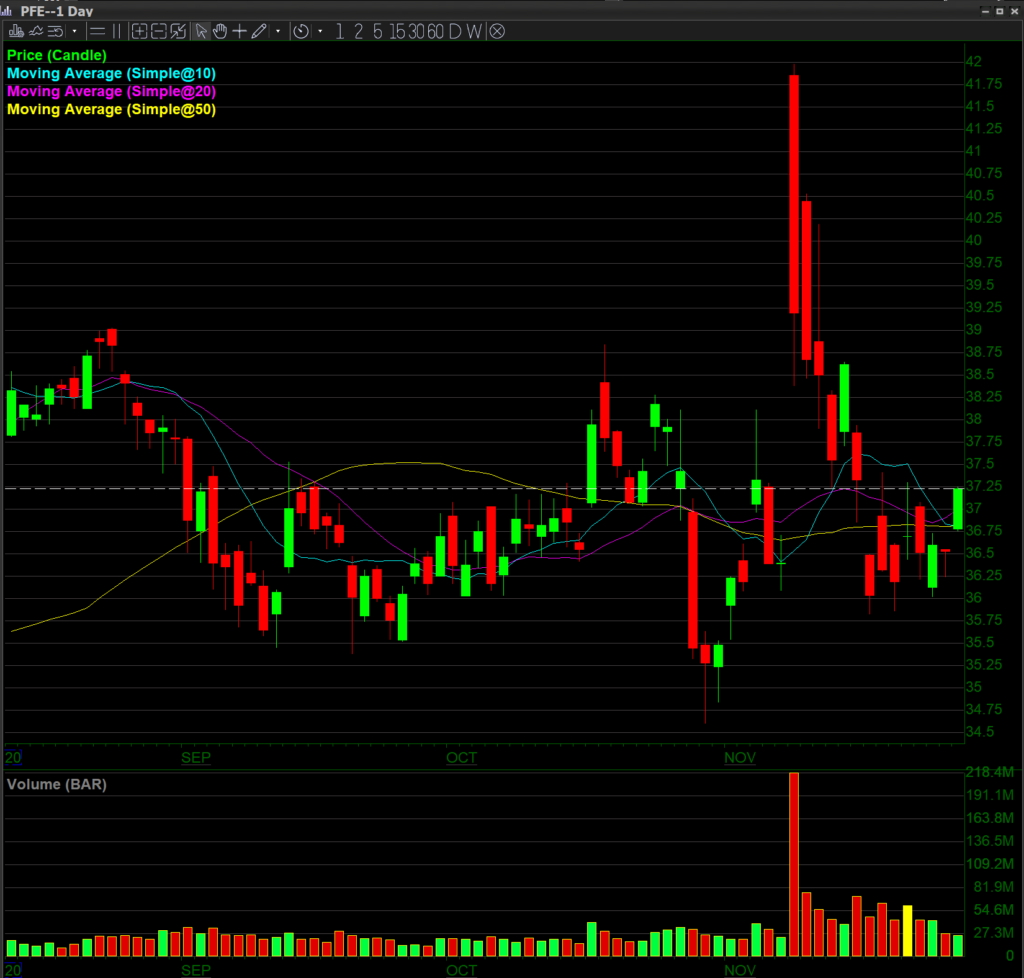 $PFE (Pfizer) looks to be ready for a move back off of support. 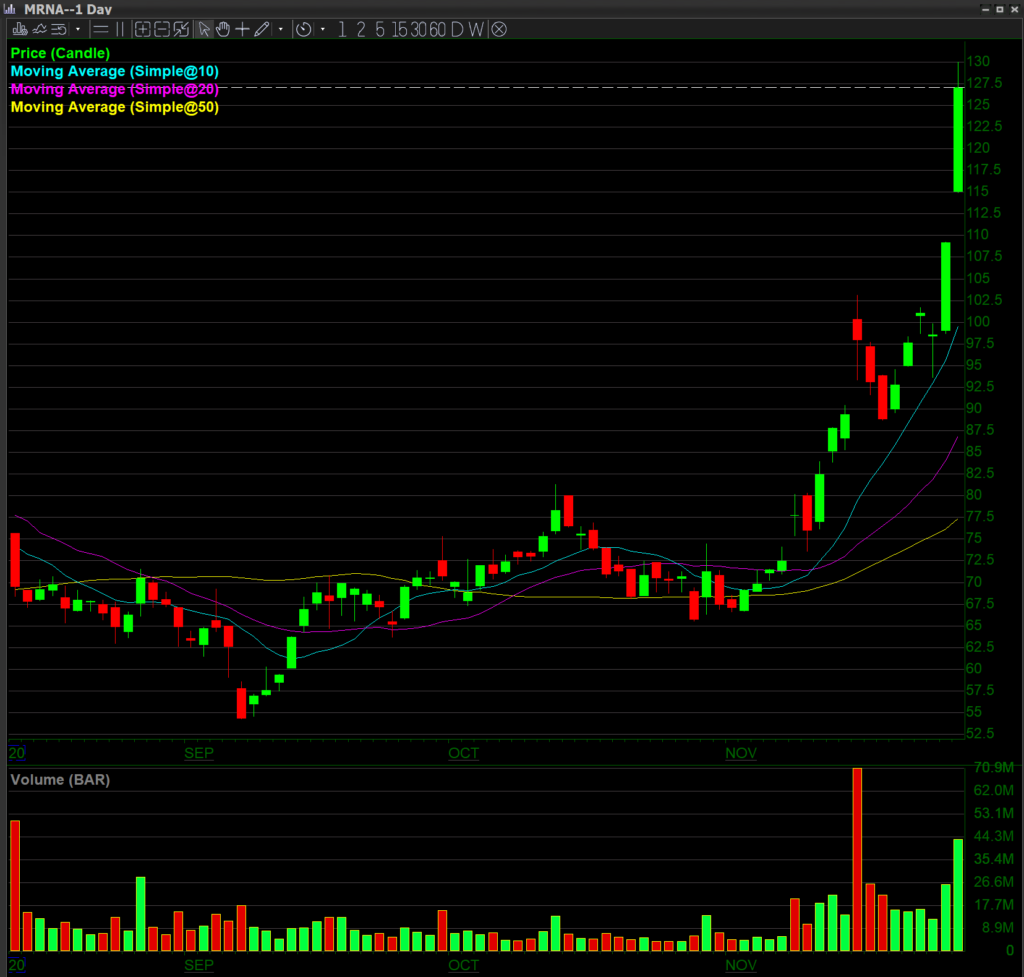 $MRNA (Moderna) has blasted off to the upside into blue sky territory, skyrocketing past $100 per share to as high as $130.

Big tech seems to have lost some of its luster, as money has been flowing back into the industrials. $AAPL, $FB, $NFLX, $GOOG, $AMZN and $MSFT all had amazing runs during the March-November rally. The tech giants made more than a few enemies along the way as they raked in record profits; politicians will be under pressure to do something in the coming year after numerous Congressional hearings. Lots of censorship questions as well as antitrust questions ($GOOG) now seem to be looming over big tech. 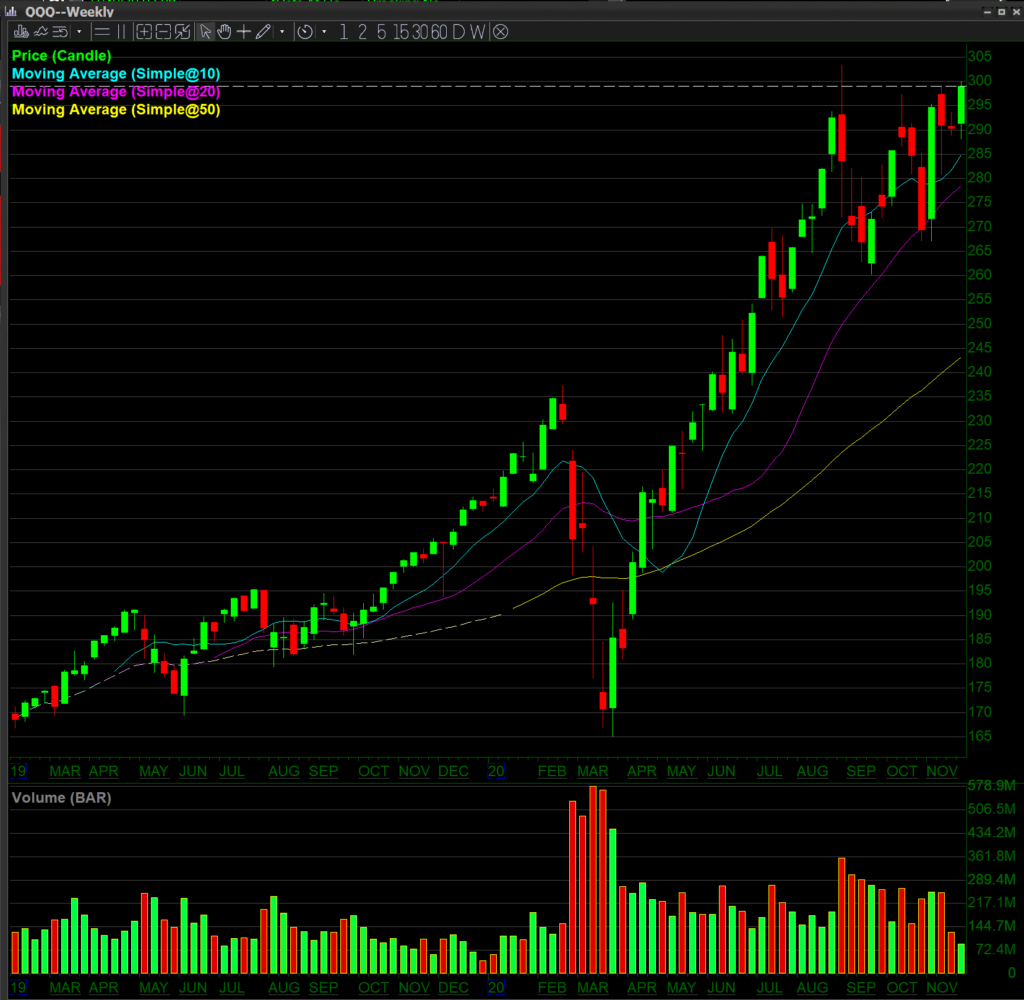 The $QQQ on the weekly would look great, if it were not for the volume bars which are very weak. 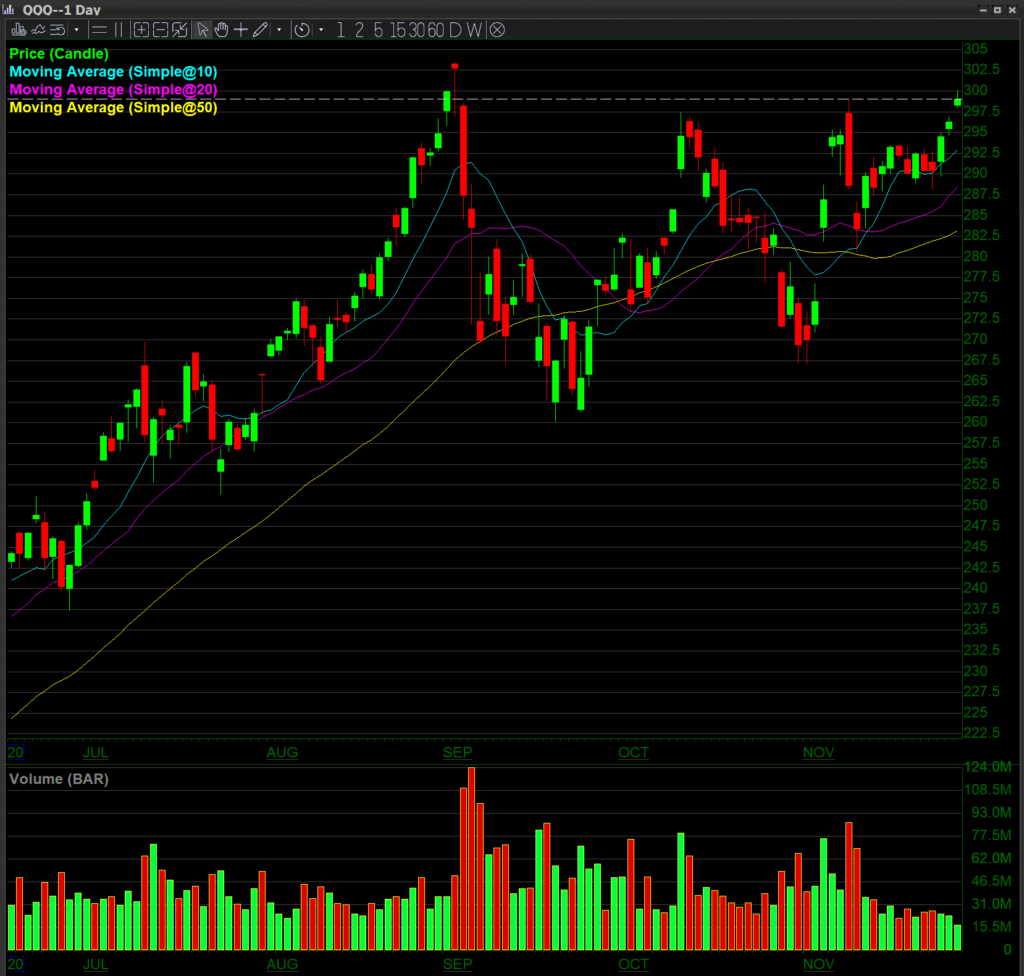 When in doubt, it is alway best to be extra cautious. Focus on day and swing trading theses until they escape their trading range. 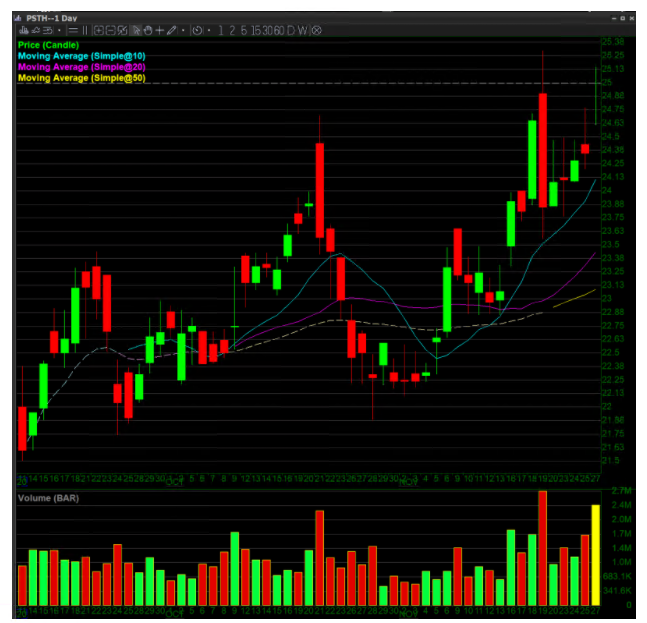 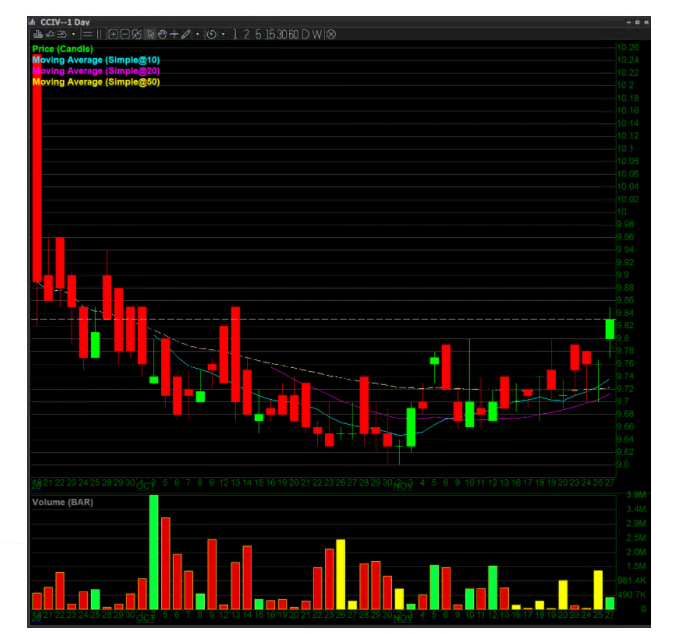 Volatility $VXX is hitting all time lows going into the holiday season, after a short run up prior to the U.S. Presidential election. Traders and investors prepared for the worst going into the elections, but it seems the worst has passed. 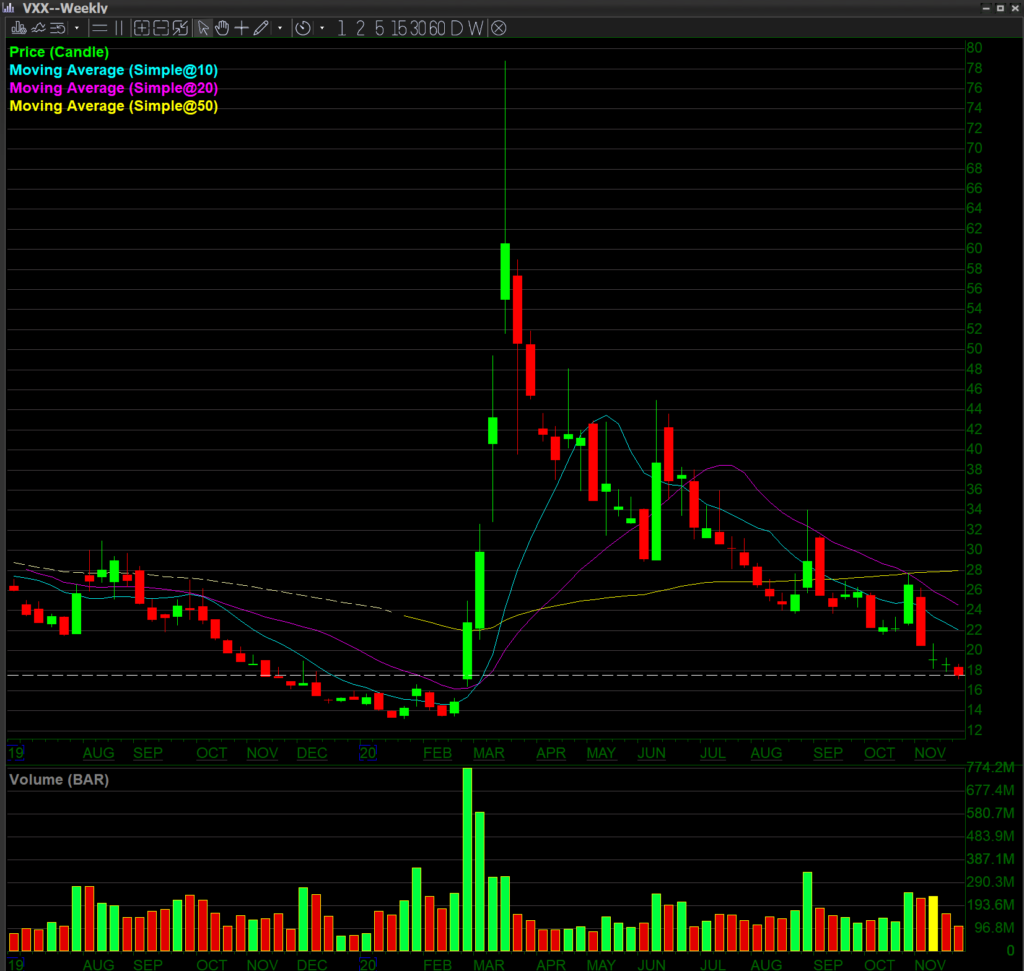 We saw the market correct, as it usually does in September and October, which are normally the two most bearish months of the year. They proceed with the Christmas rally (Santa Claus Rally) that starts in November and follows through January. What comes next? We have been going up for the past 9-10 months as the world has faced lockdowns, closures, riots, civil unrest, and political uncertainty; now where do the markets go? We believe the markets are near a short term resistance; a correction of 10% or a pause will be the most healthy. An even more bearish scenario of a 20% move down off the high would also be very normal and healthy after a run up like we’ve already had. Be prepared for the worst case, such as a recession or depression like a sell-off in 2021 after the first quarter, as long term damage to the economy is revealed. 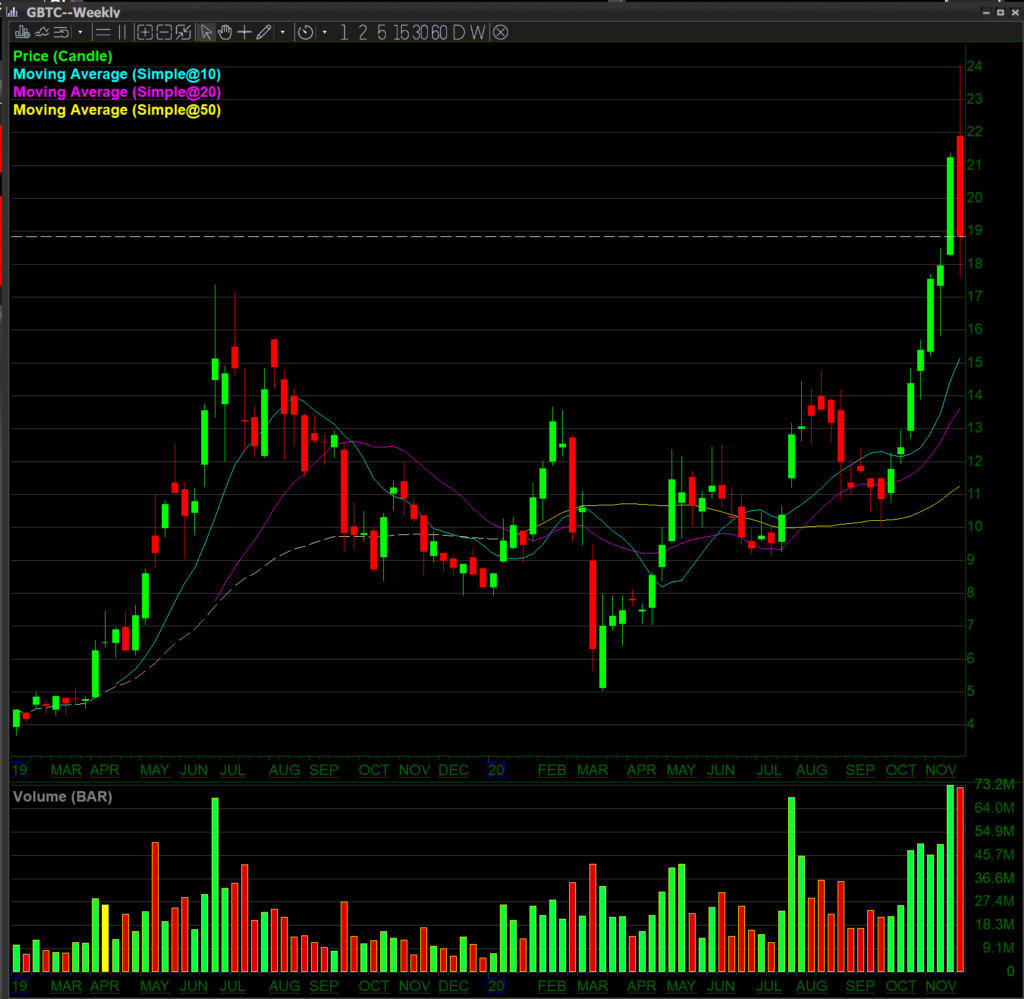 We have been spot on with $BTC and $GBTC, as that initial move broke out and pushed off to new highs, or prior highs on $BTC. 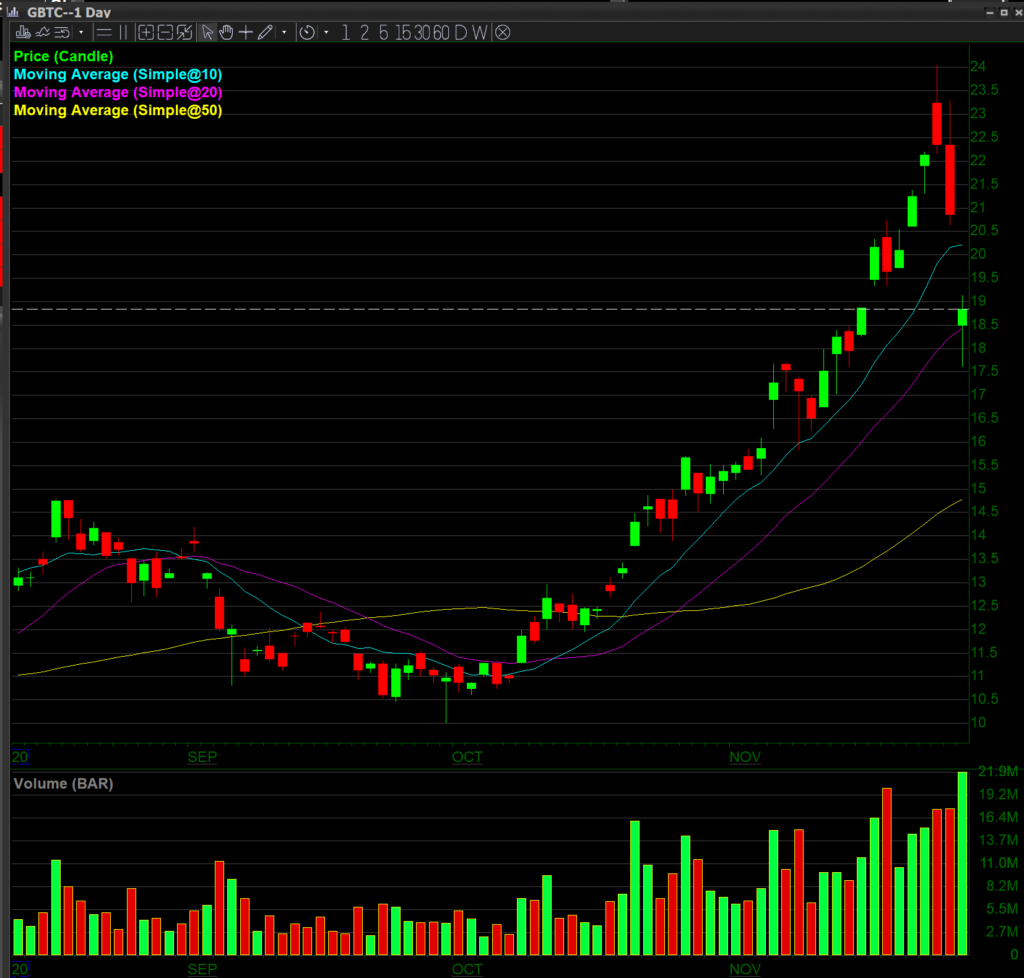 $GBTC seems to have come back to Earth a little bit. The 20MA appears to indicate some support here. 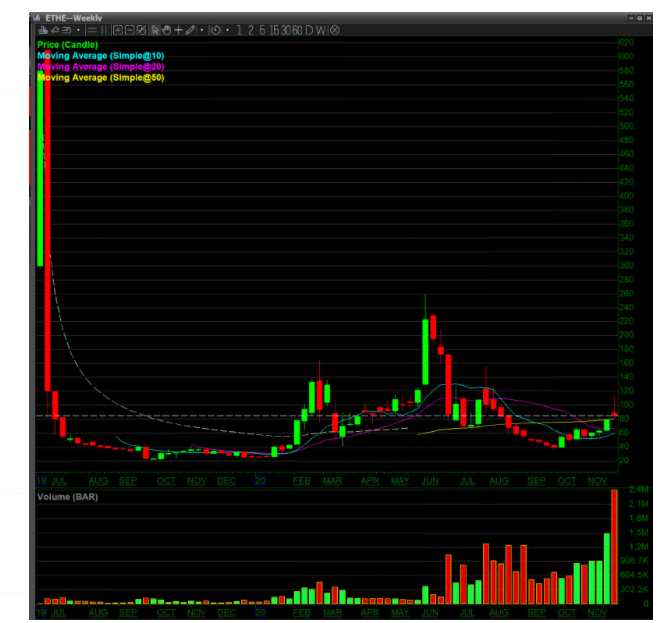 $ETHE was boring in the first big bull run of digital assets, but notice the volume this time around. The volume speaks volumes. 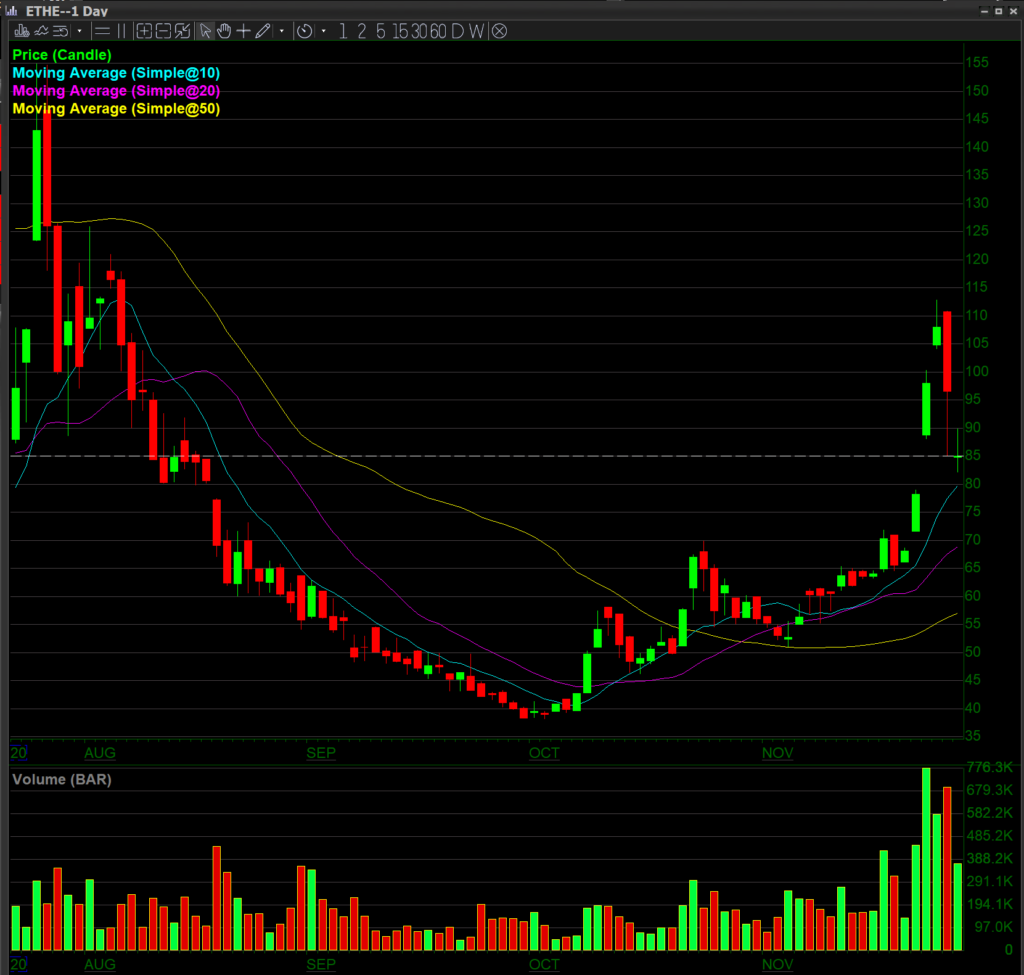 Keep $ETHE on your radar screen as it gets bought up and held. It can really continue to rise if this Digital Asset Rally continues as we expect it to.

These digital assets have broken out and are retesting some old resistance levels. This is due to broad-based acceptance of digital assets by major banks and corporations. One such notable company being PayPal ($PYPL), which has recently entered the digial asset space. Gold ($GLD) has underperformed thus far, but may be due to catch up going into January and February which are traditionally times of increased demand for gold globally. Usually $GLD rallies going into the Chinese New Year as well as some holidays in India which are in February. 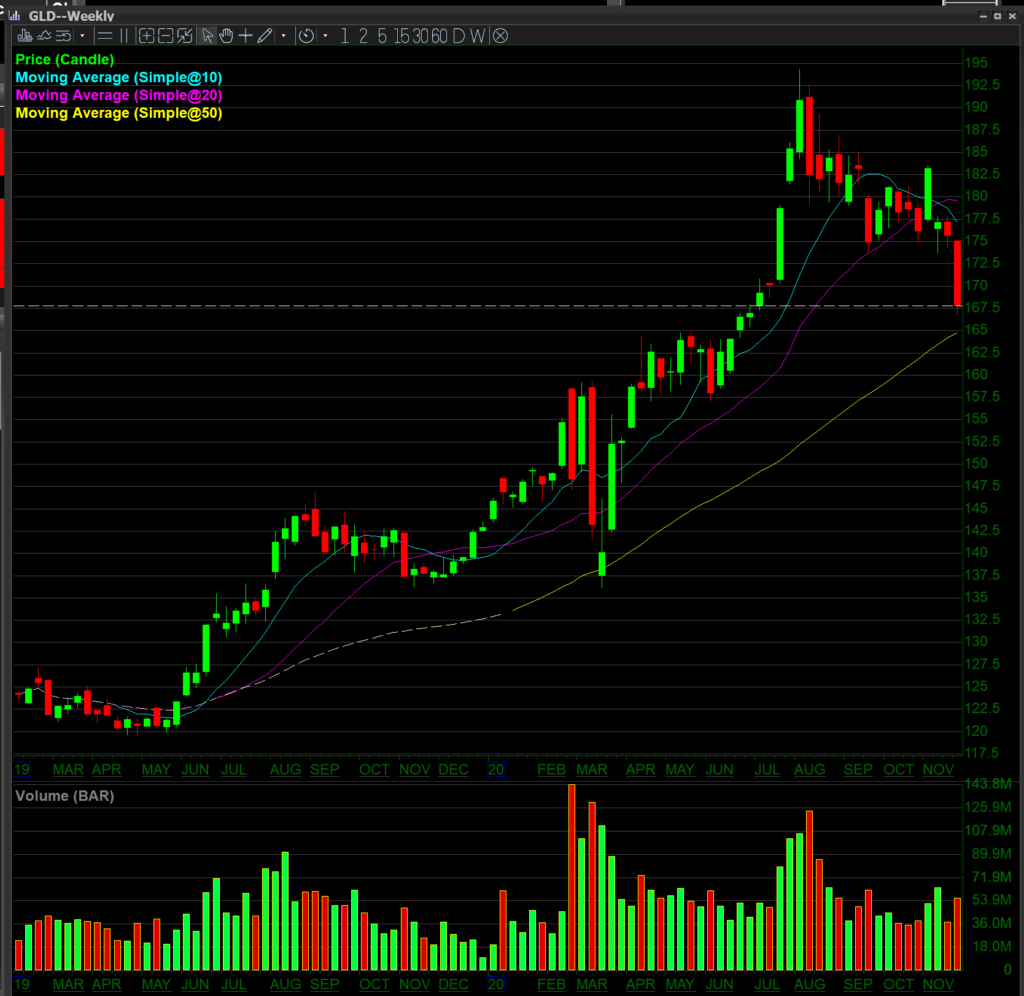 $GLD (Gold) should find support at these levels. The combination of the time of year, Gold Digital Alternatives hitting resistance, and good old fashion technical analysis all agree that this $167.50 area is a good level for gold to find support. Gold is most likely a good hold for the next 2-3 months, and may even rally back up to its highs near $195.

We are at the end of an 8-9 month mature uptrend, going into the most bullish time of the year. However, the markets are showing major signs of exhaustion. We would expect decreased volatility going into the holiday season regardless of what occurs with the pandemic as all attention is focused on the distribution of the latest round of vaccines. Unless a news event occurs as a catalyst to trigger a sell-off, we expect a quiet holiday run up. Unfortunately, come January the political transitionary fears will return, along with end of year results, and 2021 earnings forecasts. Almost everyone has written 2020 off, but in 2021 the reality of the deep economic damage might start to finally set in, so we need to stay on our toes and continue to stay nimble.

The good news about the development of an effective vaccine has shown us that there is a light at the end of this dark tunnel, although the current situation is still rather bleak. We are just starting the winter season in most of the northern hemisphere and COVID-19 cases are ticking up at near exponential levels. Vaccine production is really only at its beginning and if you consider the timeframe for production and distribution, we cannot expect this to be over before the second or third quarters of 2021. Vaccine production and distribution is a much larger effort than testing. Testing issues have plagued the pandemic control effort from the very beginning. In order for this vaccine to be effective, world healthcare systems must be prepared to deliver two doses of the vaccination to a large percentage of the population. Realistically, that will not be done until the third quarter at the earliest.

Traditional technical analysis says that at the end of a mature up trend, we will get sharp moves to the upside as well as sharp drops to the downside until all of the moving averages roll over and price gets pushed down below the moving averages. This is where our roller coaster analogy comes in. At the end of an 11 year rally, very volatile swings in the market often indicate the end of a trend. Trends, especially one that lasted for 8-9 months or even 11 years, do not die quickly. We are saying to stay nimble by swing trading and day trading. If you do not know the detailed rules of swing and day trading, stay tuned as we will outline and provide detailed trading lessons on the styles of trading over the coming weeks and months on out YouTube channel: https://www.youtube.com/c/DASTraderPRO/videos and our Blog: https://learningdaytrading.com/newsletters/

Best of luck to you all. This is not investment advice  by any means, but an outlook of things that might be to come. Trade Well & Stay Safe.

The Winter Expert #1 Best Trader Competition is coming up! Registration is still open through Sunday (12/6). The competition begins Monday (12/7) and runs for 10 trading days.