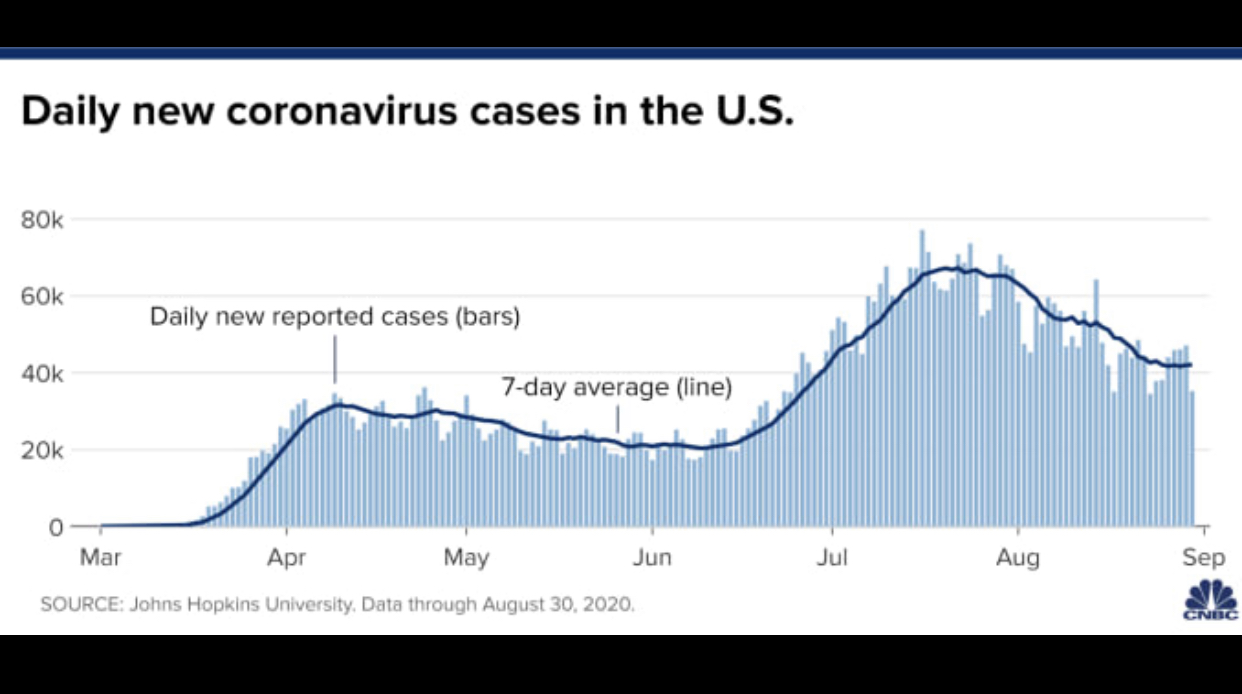 As we move into August and are facing the end of the summer, we also face mounting uncertainty. The US presidential election is less than 100 days away. Most of the country has re-opened, but the COVID-19 “wave 1.5” continues in many states. Several businesses have thrived during the pandemic while others have completely failed and will never reopen again. Congress continues to argue over another round of stimulus which, in effect, keeps the country’s economy on life-support.


In trading and investing, hindsight is off in 2020; pun intended. A pandemic of this magnitude  has unique dynamics as it is occurring at a time when the world is switching from analog business to digital business. The Federal Reserve and Congress created a sharp recovery in the US financial markets by injecting a huge amount of stimulus in the way of cheap money and free money. The intention was to get us through the initial closures at the beginning of the pandemic. This inflation of the market was done at the expense of the US dollar, which has now started to fall. The US dollar, at the moment, has a mounting debt crisis, and it is paying virtually no interest for people to keep it in the bank. This creates a situation where Gold ($GLD) and even digital assets such as bitcoin $BTC and $GBBT become more attractive as they do not have any debt.


A Steep -32.9% decrease in USD GDP is unmatched in Post WWII US History. 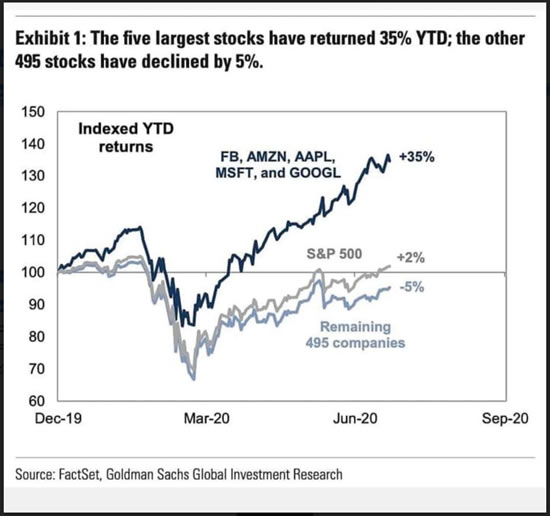 National Debt as a % of Nominal Gross Domestic Product also at unparalleled levels. 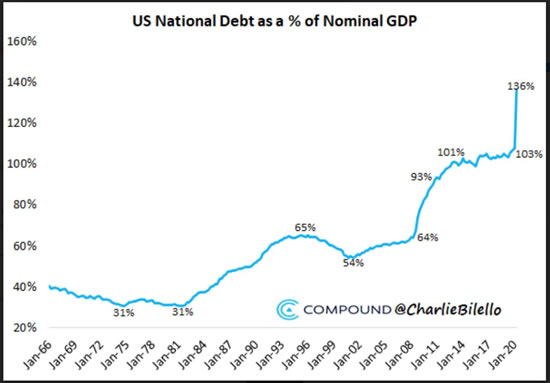 Important Reminder (from last month): Fundamental analysis often takes a long time to catch up with the technicals and the news, but the hard reality of the fundamentals usually catches up to the markets, bringing it back to its senses.


$GBTC a $BTC Bitcoin Tracking Stock is surging to new highs due to US dollar weakness. 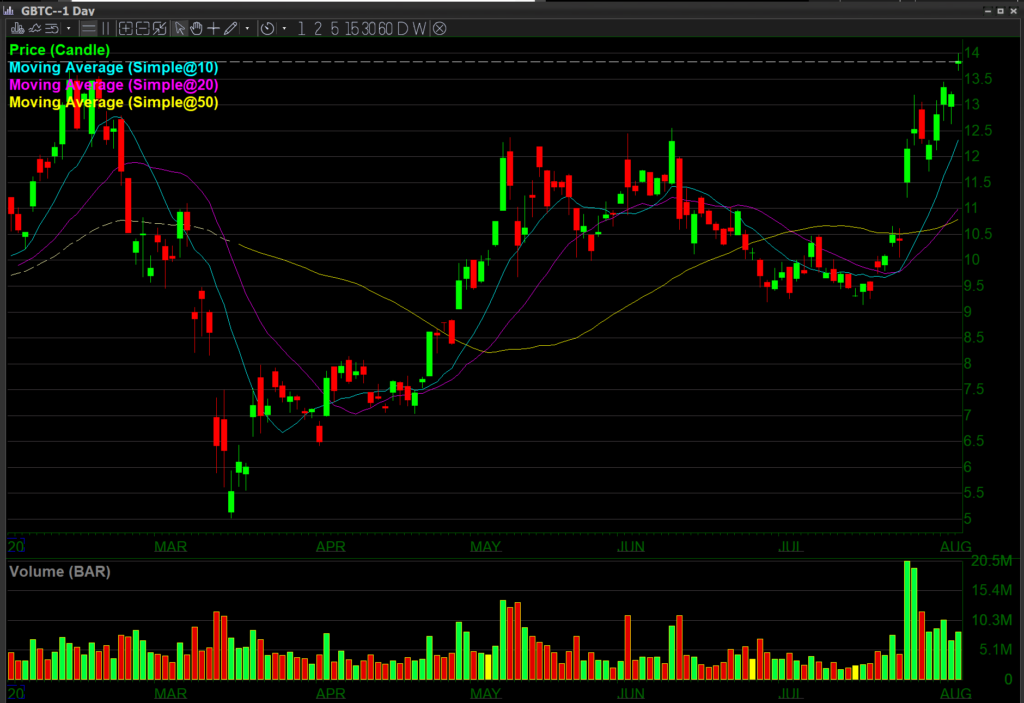 $GLD the Gold ETF (Exchange Traded Fund) is also breaking out on US dollar weakness. 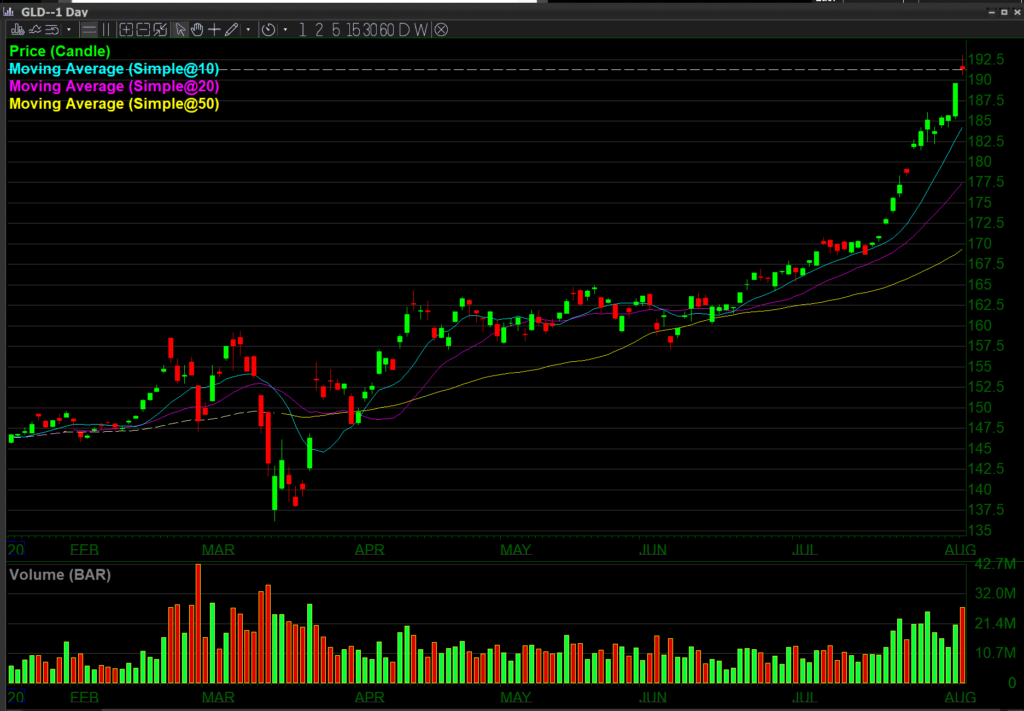 We repeat this reminder because it is important for us to understand that we must remain solvent while waiting for markets to become rational once again. We have seen a large amount of traditional analogue businesses, such as retailers and restaurant chains going out of business and/or filing for bankruptcy. At the very least, some are closing stores for them to never reopen again. The tech giants such as $FB (Facebook), $AAPL (Apple), $MSFT (Microsoft), $NFLX (Netflix), $AMZN (Amazon) and $TSLA (Tesla) have surged to new heights. Oil companies, energy producers and banks are facing an uncertain future as competition from new directions and diminished demand for their services have cost them greatly.


$FB had an amazing quarter. The big question is how the stock will react as we near the presidential election. $FB played a big part in the last election 4 years ago. 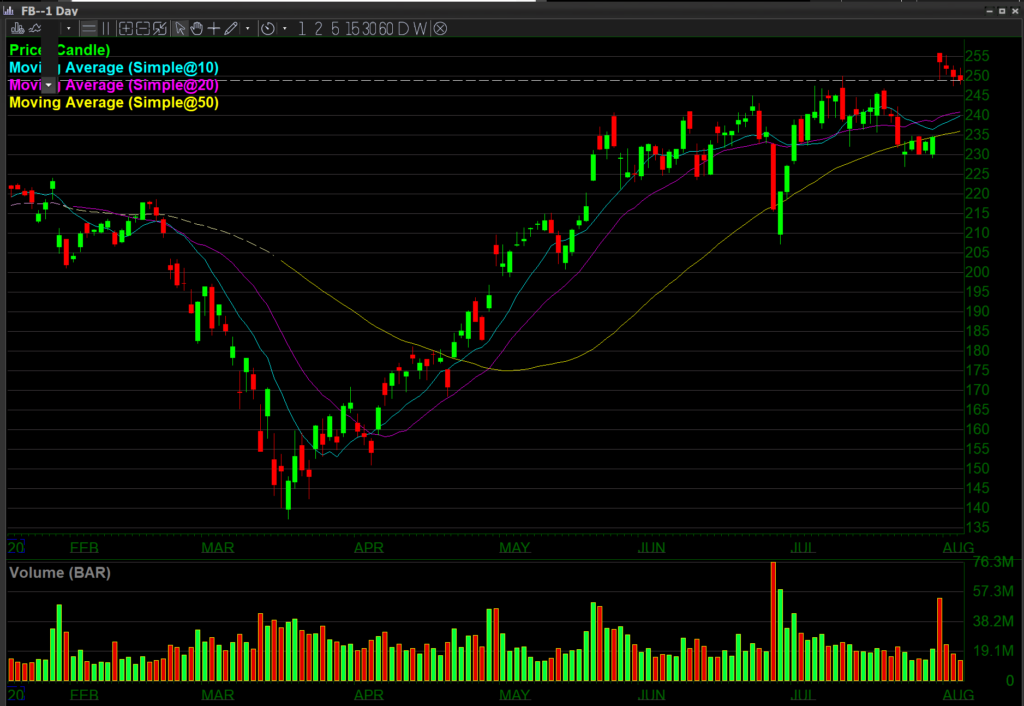 $AAPL had blowout earnings and announced a 4 to 1 stock split; a rare occurrence for a tech growth company. 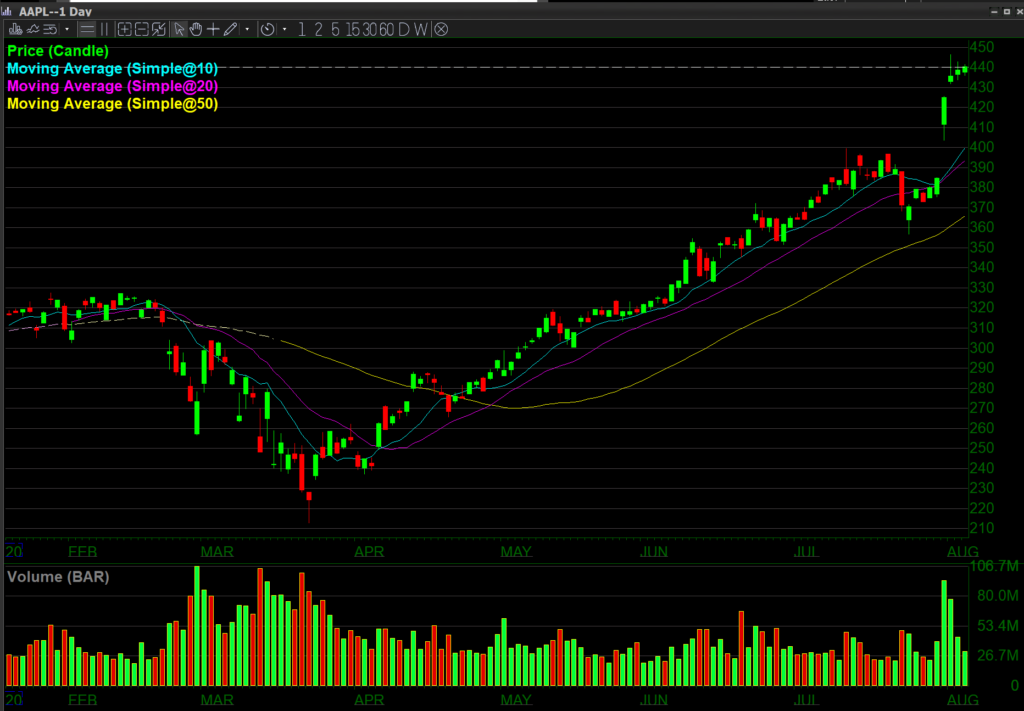 $NFLX, an early frontrunner at the start of the pandemic, seems to be running out of steam. Users that would have joined, have all joined by now. Due to this, the growth benefits may have already been realized. The chart of $NFLX seems to be leaning in a more bearish direction. Caution is the safest play when it comes to $NFLX. 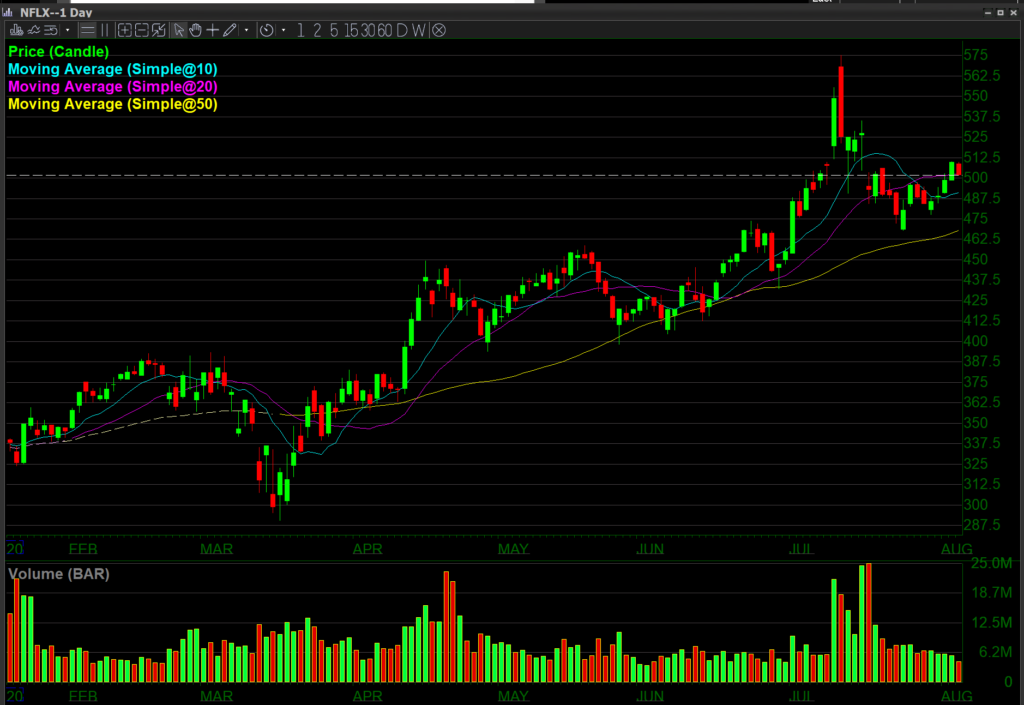 $MSFT had great earnings as they are a Cloud computing leader. The stock made its biggest move with their exploration of the acquisition of TikTok. Their chart looks like it might be coiling for a further move to new heights. 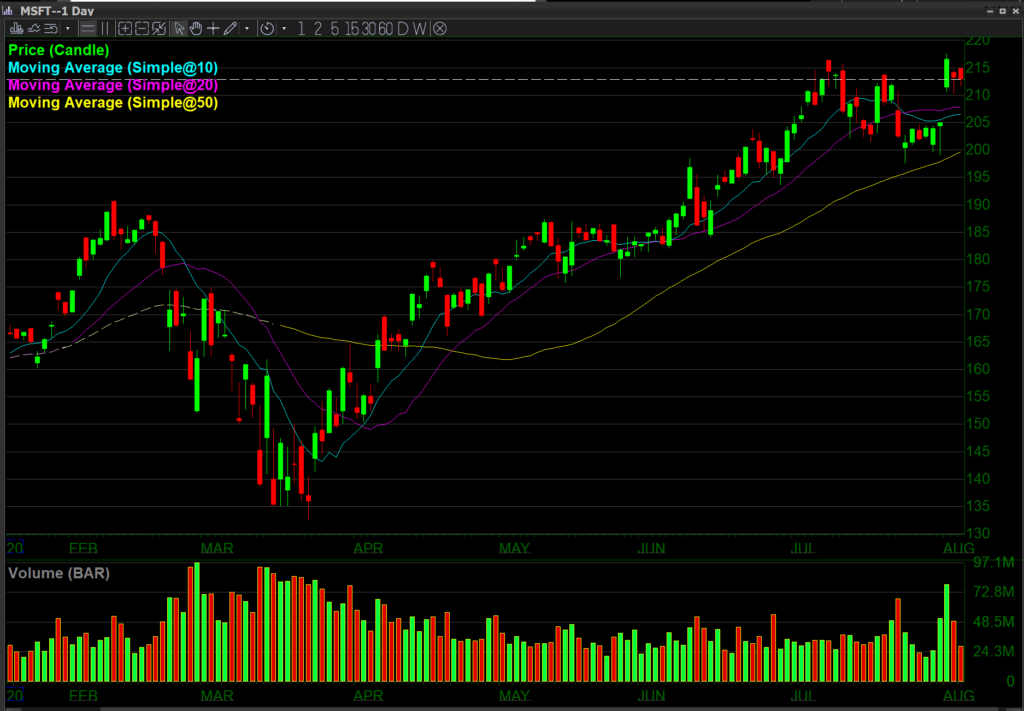 $AMZN earnings expectations were high, but the results were even higher. The stock looks to be coiling for a further break out into blue skies. 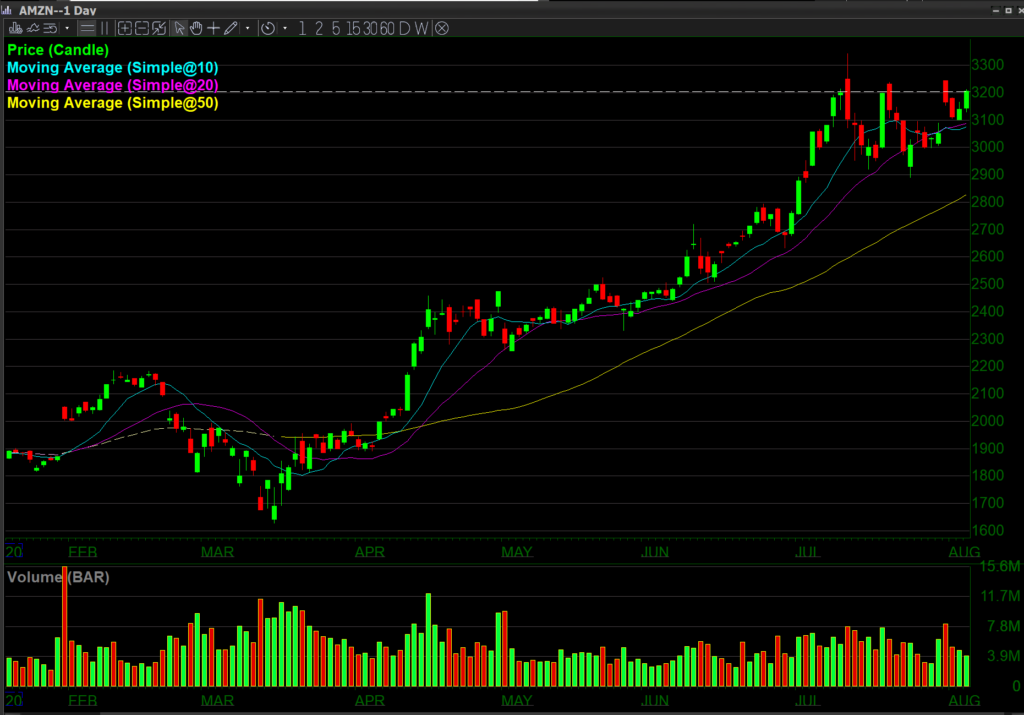 $TSLA has already made an incredible move this year. It can go even higher as it added to all the major indices, forcing index funds to acquire shares. They even managed to make a profit. 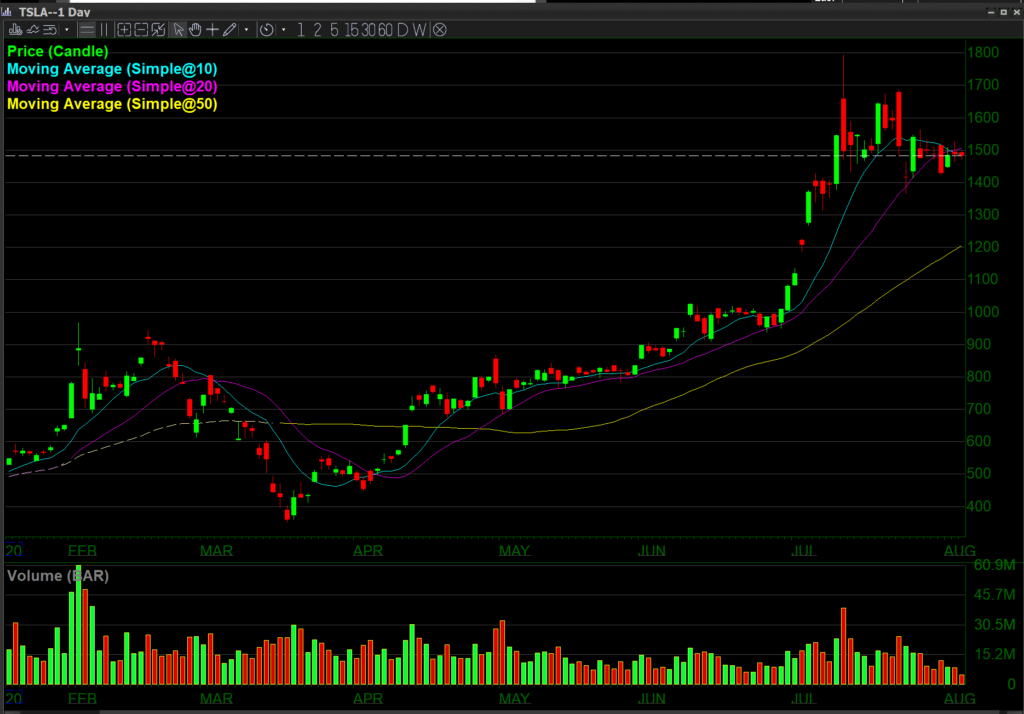 $GOOG is the one tech giant that did not beat expectations for earnings. The chart is starting to show weakness. Could $GOOG be a sign of things to come for the entire group of tech giants? $GOOG and $NFLX both seem to have run out of steam. 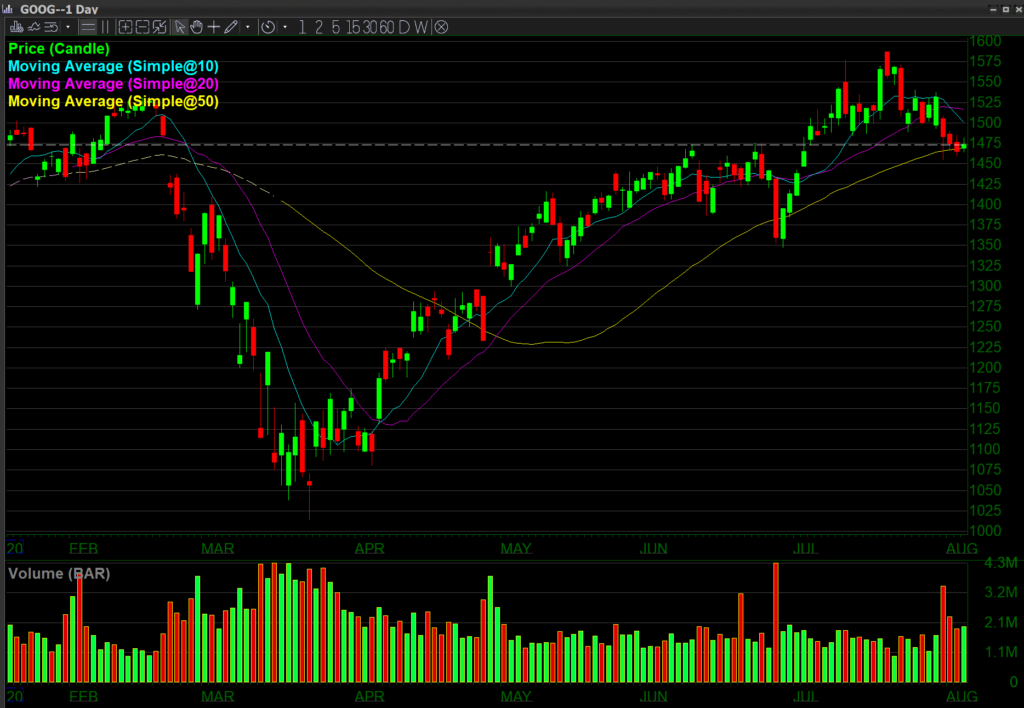 Most of the growth in value in the US indices have come from these 5 tech companies, while the other 495 have lagged far behind. If they start to fall, they crash the entire market from an index percentage as their value makes up a large portion of all three major indices. 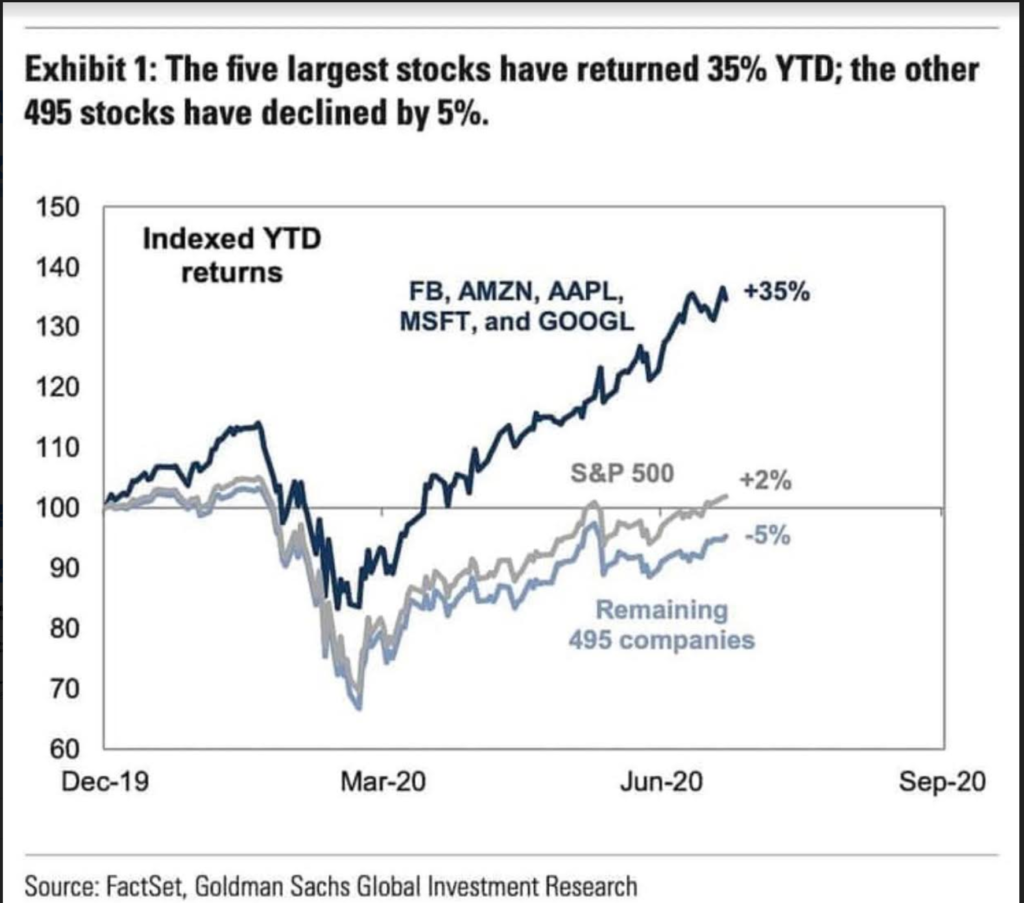 We repeat, “Investing long term in the stock market at these high levels after a global pandemic does not seem like a rational thing to do. Sitting and waiting for things to become more clear seems like the most prudent plan.”


If you remove the FANGAM stocks ($FB, $AMZN, $NFLX, $GOOG, $AAPL and $MSFT) from the major indexes, you would see financial markets have already started to level off. We would already be in a deep decline if it weren’t for an ever increasingly weak dollar, ongoing handouts from the government, and cheap money from the Federal Reserve. The reality is that these conditions are not sustainable. In our opinion they are not investable but they are tradable.

If our technology orientated giants start to have any issues, (such as antitrust or any other issues) they will be the stocks to bring the market down, as they are currently the only thing holding them up. 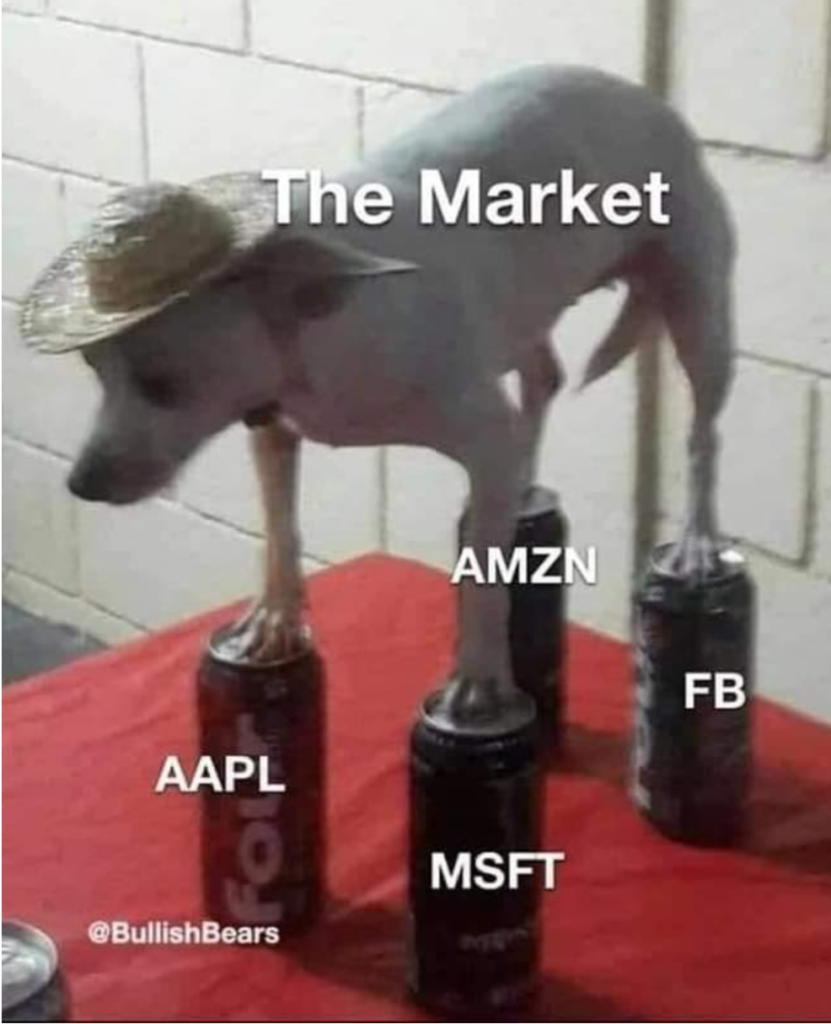 $GLD (gold) has been a huge beneficiary as the United States, Europe and England all passed huge stimulus packages. Since these governments piled that onto their currencies and cut their interest rates, gold becomes more attractive as it is appreciating in value. Money will always flow in the direction of a higher rate of return. If your money is not earning interest in the bank, it is best to put it into gold which is currently going higher. $SLV (silver) is also going up. The general rule is that silver will underperform gold most of the time, but it may outperform gold at times of interest in precious metals.


$SLV is out performing $GLD, but both are doing amazingly well as the flight to safety trade continues. The weak US dollar and expected near-0 interest rate make holding $SLV and $GLD more attractive. 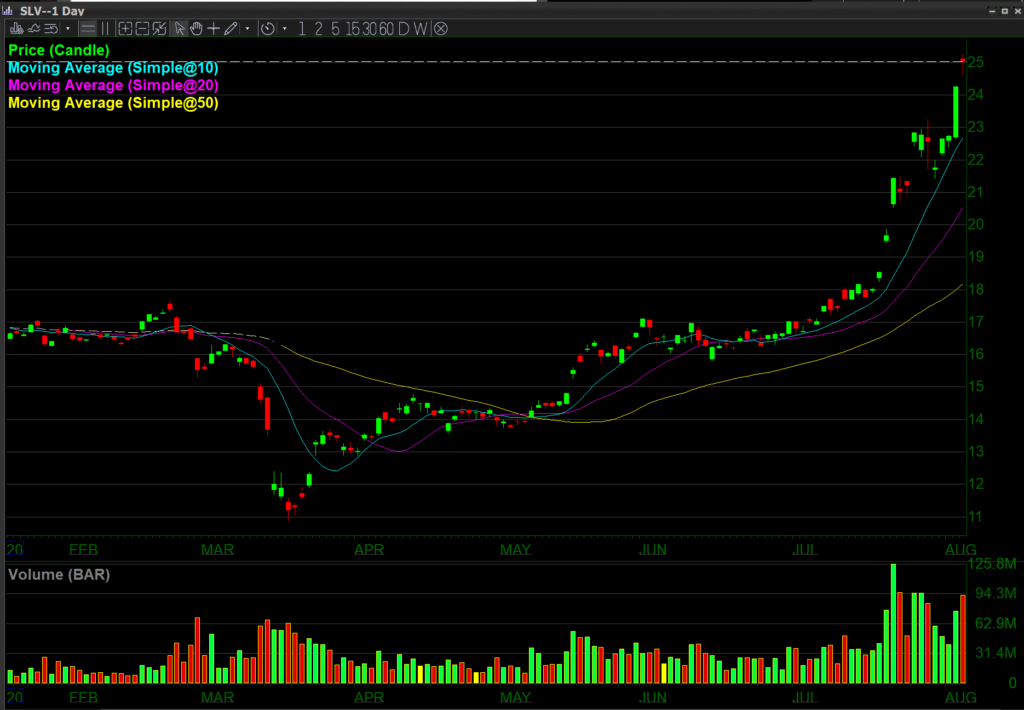 We are continuing to lean in the direction of neutral, to additional bearishness going into the third and fourth quarter. Markets will become uncommonly volatile as we get closer to the US election. In times of transition, it is much better to be a trader than a long-term investor.

Remember, markets very rarely bottom; they usually double-bottom and base before a true reversal or resumption of a trend. We are still in “wave 1.5” of the global pandemic, and are only now starting to see the full effects of the economic disruption and damage it has caused. As far as the national economy goes, it is still currently on life-support provided by the Federal Reserve, Congress and the President; and it may be so for the foreseeable future. The big questions are: how the market will deal with the impending election, and the possible ongoing problems with China (which only seem to be getting worse).

New York is finally starting to reopen just as many of the places in the country that had initially reopened are dealing with a resurgence of COVID-19. The current new epicenters are California, Arizona, Texas, Florida, Georgia, North and South Carolina. Almost half of the southern states are showing signs of increased cases but with a lower death toll. However, the demographic tends to be much younger, as people in their 20s, 30s and 40s are getting sick because of a lack of social distancing precautions.

Europe has largely reopened but now “wave 1.5” seems to be starting therel. Spain, France and other nations have also started to see their new case numbers rise. Social distancing is the order of the day, but people who have been cooped up for months are taking more and more risks during the warm summer months.

As predicted and expected, Brazil, Mexico and India are now always very high on the new cases and death toll lists. Pretty much all of South America seems to be afflicted at the moment with major outbreaks in Columbia and Peru; as the geographic center of the pandemic has shifted to the southern hemisphere’s for their  winter season.

As expected, the market sold off rapidly with the onset of a global pandemic. After the initial sell off, the market rallied once protective measures and stimulus bills were passed. The financial markets seem to be reacting as a place to store value while this worldwide pandemic passes. The normal rules that govern the financial markets do not seem to apply at the moment as they seem to shrug off any negative news related to unemployment and problems caused by the pandemic.

We have to contend with the following normal market fears and wonder when they will start to kick in:

-Uncertainty over the Trump administration’s future and the normal election year uncertainty.
-Trade war concerns with China.
-Now it is all about the US dollar.

Historically, the markets will rise as the dollar falls. However if the tech giants fall, so will the markets as they are holding everything else up.

We wanted to send a special shout out to the winners of our Summer #1 Best Trader Competition:

You can learn more about the winners on our #1 Best Trader Competition Winners page.

Best of luck to you all. This is not investment advice by any means just an outlook of things that might be to come. Trade Well Stay Safe.